A teacher offers help to parents struggling with schoolwork. A lawyer volunteers to field legal questions by text. A stream of people post offers of things others might need: children’s books, diapers, plant seedlings, deli meats.

As the Covid-19 crisis deepens across the country, many have focused on the government and private-sector response. But in Facebook groups, Google Docs and text message threads across Western New York, communities are also organizing to care for their neighbors.

These grassroots peer-to-peer initiatives – most of them organized online in the name of social distancing – make up the local bulwark of a national movement that has emerged in recent weeks to support individuals whose lives and incomes have already been destabilized by Covid-19.

“We know the coming days are going to be some of the hardest we have ever faced,” said Bridge Rauch, the nonprofit program coordinator and West Side resident behind a burgeoning Facebook group called the Buffalo Mutual Aid Network. “But we are comforted to know that we are not alone in this, even if we need to physically separate ourselves from one another.”

With 1,600 members as of Saturday evening, the Mutual Aid Network is the largest and best-organized of the dozens of groups to take off since coronavirus began closing schools and businesses. Part community news board, part resource clearinghouse and part volunteer hub, the Facebook group aims to both educate Western New Yorkers about the growing crisis and rapid-build an ad hoc safety net for those who find themselves out of work, stuck indoors or without access to food, medicine and essential services.

Started by Rauch on March 14, the group is now manned by a rotating crew of roughly 20 volunteers, who moderate the comments, track the latest news, and call city agencies and non-profit groups for updates on housing, food aid and other services.

A companion resource guide, crowdsourced by dozens of local contributors and hosted on Google’s document platform, topped 6,700 words as of March 21. That guide, like much of the group’s work, reflects the profound range and depth of local need that coronavirus exposed.

There are phone numbers for food pantries, links to free online coloring books and children’s yoga videos, and memes of Erie County Executive Mark Poloncarz scolding residents to stay home. Elsewhere in the group’s growing digital network, volunteers have launched a “solidarity fund” for local residents who have been laid off; interested donors can send cash directly via Cash app or Venmo.

“We really are in this together,” said Brittany Kirkley, a volunteer who counts the fledgling group, and similar organizations across the country, as a rare bright spot in the pandemic.

Mutual Aid organizers are also recruiting volunteers to pick up prescriptions for seniors, to walk or watch stranded pets, and babysit kids whose parents no longer have a daycare for them. Are you comfortable picking up prescriptions? The online intake form asks. Do you have a wheelchair-accessible van?

Separately, in dozens of daily Facebook posts, locals offer free goods and services to anyone who might need them: homework help, bike repairs – even therapy by phone or teleconference.

Julie Vee, a psychologist and adjunct professor at Medaille College, posted an offer of free counseling sessions for kids and parents March 17. She has since connected with three families, she said, to talk them through everything from their anxiety on behalf of an elderly relative, to the struggle of explaining Covid-19 to children.

“I wanted to be useful,” said Vee, who is still taking free appointments on Facebook. “I saw all of the great organizing people were doing, and I was like: ‘Wow, look at these rockstars! What can I do to help?’”

Locals also post their asks to the Mutual Aid Facebook group: a computer to do homework, say, or a smartphone for work, or DVDs for a group of veterans stranded in rehab at the VA Medical Center.

Elisa John-Schreiber, a longtime West Side resident, received a delivery of fresh produce, dairy and lunch meats through the group last week. She has been living with her daughter and three school-age grandchildren since her roommate began displaying Covid-like symptoms, and the family had grown worried about paying for groceries.

A friend invited her to the Facebook group last weekend, John-Schreiber said, and she quickly connected with a food service worker distributing spinach, peppers, eggs and cheese from his restaurant’s closed kitchen.

“I’m really proud of Buffalo. I’m proud to be a Buffalonian right now,” John-Schreiber said. “We’re definitely living up to our reputation as the City of Good Neighbors.” 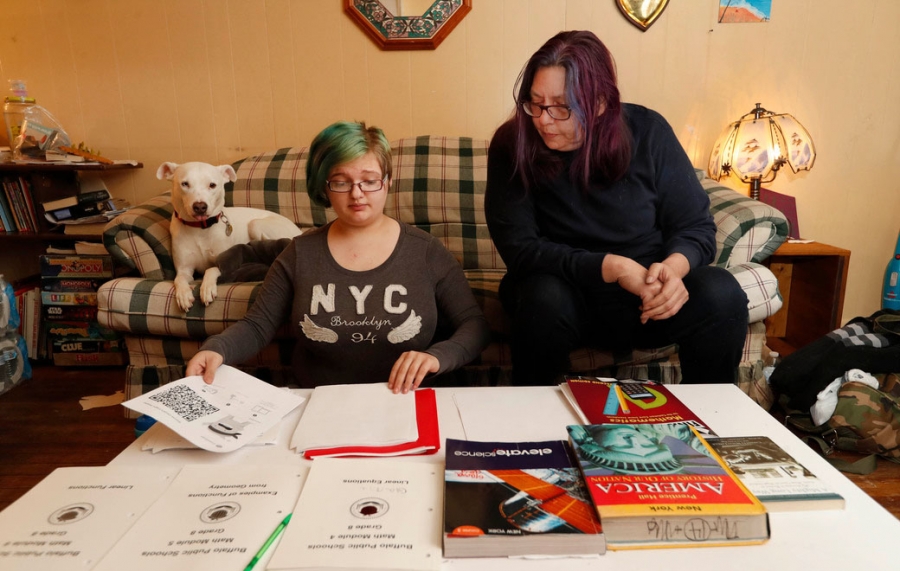 Such “mutual aid” networks aren’t limited to Buffalo, and they’ve sprung up in dozens of cities across the country as the crisis has deepened. Rauch was inspired by the work of organizers in Seattle, who have mobilized hundreds of residents to deliver groceries and supplies to vulnerable people and raised over $100,000 to fund their efforts.

In Western New York, grassroots digital efforts have also flourished far outside the framework of an organized aid network. There are Facebook groups for teachers "teaching through quarantine" and fundraisers for homeless shelters to buy disinfectants; there are crowdsourced restaurant directories to support local businesses, and Nextdoor threads to rally helpers for the elderly and otherwise at-risk.

On March 17, Del Reid, the self-described “co-founder” of the Bills Mafia, rallied his 28,000 Twitter followers last week to connect laid-off workers with new jobs. That same day, Kerry Alsheimer, a musician and performer who goes by the stage name Kerry Fey, took to Facebook to start a private support group for new job-seekers.

Alsheimer, who was herself laid off from an office job shortly before Covid-19 hit, now uses the group to share job openings and boost the morale of Western New Yorkers stunned by sudden layoffs and income losses. Its 25 members include restaurant workers, developers and creatives like Alsheimer, who has already lost gigs and a job interview because of the virus.

“More so even than connecting people with jobs, my main goal is to make people feel connected,” she said. “Because even in the best of times, when things are normal, being unemployed can make you feel lonely and isolated.”

Now, as coronavirus continues to transfigure daily life, isolation is far from the only threat Western New Yorkers face. Vee, the psychologist, said the virus has triggered acute feelings of panic and anxiety in both her clients and the general population. Confronted with a drumbeat of bad pandemic news – test shortages, growth curves, disaster declarations – it's easy to feel powerless.

But Rauch, the founder of Buffalo Mutual Aid, emphasizes the things people can still do to help. The group, which on Saturday formalized a partnership with the nonprofit Coalition for Economic Justice, is soliciting both volunteers and donations.

"Make a grocery run for immunocompromised friends, walk a dog for an elder neighbor, FaceTime with a niece or nephew so their parents can have a breather," Rauch said. "Social distancing doesn’t mean completely stopping everything. It’s just rethinking our relationships and being smart about how to be close while maintaining physical distance."