He has his reasons: First, because customers – still in the habit of wandering into restaurants to pick up food to go – regularly twist the door handle or knock on the window, leaving germs that, for what feels like hundreds of times, must be sanitized before the next order is taken curbside.

Second, because there's not much left inside. The bar shelves no longer are lined with bottles of liquor, as Mecozzi and his bar manager, Joe Graziano, took down most of their stock Saturday, anticipating a full-on shutdown and trying to avoid potential theft.

Third, because, well, he technically has a half an employee. On Monday, Mecozzi felt he had no choice but to lay people off: six Black Iron Bystro employees, with Graziano still available on-call.

In some ways, the Blasdell owner is fortunate: his small and scrappy team sustained a venture, in terms of staff size, smaller than larger urban restaurants such as Toutant, Dobutsu, Forty Thieves or Doc Sullivan's, who've laid off dozens of employees by deciding to close their doors entirely.

Like many of his restaurateur peers, Mecozzi's last five days have been riddled with strong emotions, from frustration to resiliency to just outright bizarre. A conversation with the 37-year-old Black Iron Bystro owner hit on myriad topics.

On the experience of cooking alone in a kitchen and restaurant that typically bustles:

Mecozzi: "It's obviously bizarre, it's strange. I come in and basically lock the door behind me. ... It almost feels like a military zone, yeah? I drive from my house, drive in to my work, and then I lock myself in. ... We're quarantined at home, then we've quarantined ourselves here."

On last weekend's discomfort, when restaurants and bars weren't sure how to proceed despite the growing pandemic:

"I feel [expletive] horrible that we were promoting people to come in and support the business last weekend. I feel really bad about that, I really do. In retrospect, I step back and say, ' ... That was the wrong thing to do.'

On the harsh reality of Covid-19 on his business:

"Ironically, if you talked to me three weeks ago, I only had four employees. I added two because we started picking up. I've been going through a bit of an emotional roller coaster there, too. I was just hitting my stride for the year, and I was like, 'Oh my God, 2020, this is awesome.' That is a fact.

"It's hard to talk about, because I was trending in a way where (I thought), 'This is gonna grow, this is gonna be my year where we're finally going to start being serious about, Where's Black Iron 2?' This, obviously (laughs) puts us back to Square One."

On the expectation of outside help:

"I don't see any type of benefit coming our way; I don't. The sales tax thing, all that stuff — that's not going to help. You're supposed to be collecting taxes and setting that aside so when it comes to that time, you just drop it in.

"If they delay it, that's fine — I hear people when they say, 'I wish they'd just delay it a month' ... but really, that's the same thing as getting a loan ... that's not going to help anybody. You're just digging yourself a hole.

"When we come back from this, the economy is not going to be good. I think you're going to see more people falling off the cliff afterward than right now."

On finance control during Covid-19:

"There are so many rules and regulations that I don't even know where to start. I'm looking at all the things I pay for to run a business, and oh my God, there are so many forgettable fees. I have a linen guy who's probably going to show up tomorrow, who the hell knows? That's another thing, it's like, 'Oh [expletive], I have to call my linen company and tell them that I don't need anything.'

"My goal right now is to pay off what I owe so that if and when it's time to reopen, I'm not going to be like CODs all over the place and crazy in debt and trying to dig myself out. I'd like to be as close to even as possible. Which is impossible ... " 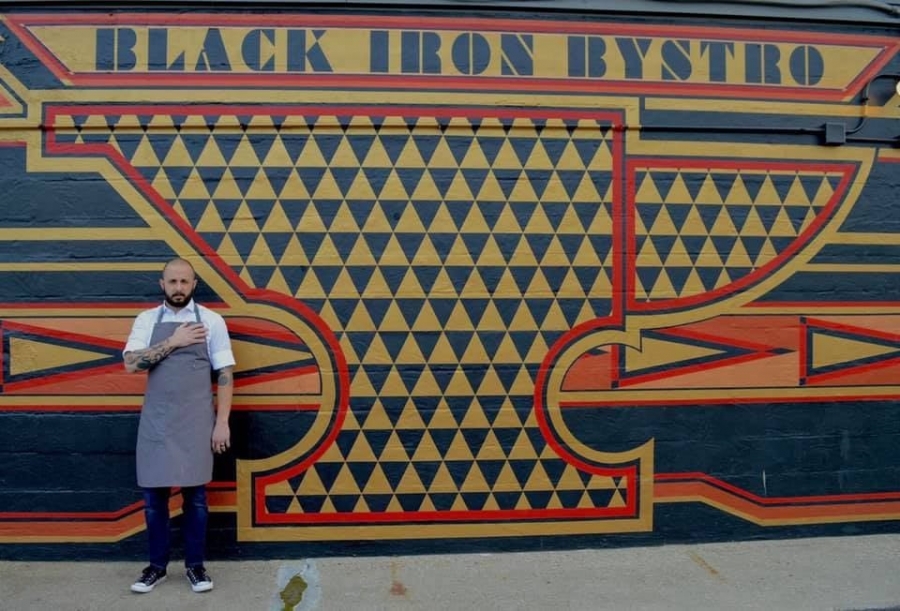 Mecozzi, standing in front of the wall art at Black Iron Bystro in Blasdell. (Photo courtesy of Black Iron)

On lack of enforcing regulations:

"I want everyone to stay home, but I want to serve takeout, and I want everyone to know it's super clean and super sanitary, but it's wild because it's not like anyone is coming here and checking. That's why I said it's like a military zone. It's pretty martial law out here.

"Anything could be happening behind these closed doors since we're not letting anyone in — that's wild. So I'm honored that I have a lot of people who trust me with their food, and I'm super happy with their support."

On potential problems ahead:

"They're allowing us to do takeout, but the laws don't say anything about having to do curbside pickup. They're still letting people go into places — we're not letting that happen.

"On my drive home from here, I pass pizzerias, and there's people packed into pizzerias waiting for their orders. I think, 'What the hell is that?' Not only are you bringing people together in a room, but you're doing it in a room that's selling food. That doesn't make any sense to me, and I think that's going to get out of hand.

"People just can't get away from their comfort zone: 'This is what we do.' Holy [expletive], that's going to ruin it for everyone, I feel."

On the staggering lack of respect and safety on St. Patrick's Day weekend:

"If you look at last weekend, talk about a serious joke when it comes to human life. My lord, zero priorities there. Meanwhile, grown men are [expletive] crying at home because they might lose everything, they've got these turds out there slamming Coors Lights."

On restaurant leaders during this time:

"James Roberts — he's done a phenomenal job online. There's a (private) Buffalo restaurant owners forum that he started, and he always starts the conversations — to be transparent, I never add to it, but I follow — and I can't thank him enough for being a leader there. It's huge, and it's really encouraging. And Robert Free (New York State Restaurant Association chairman), too.

"Those guys have been instrumental leaders by helping out all the businesses, keeping everyone up to date on what's going on. ... He's still running this and adding to the conversation. Quite frankly, I think a lot of people would just be focused on (themselves) at that point, but he's closed, and he's still leading the way."

"If I were a consumer, the last thing I'm trying to do is go out somewhere where I don't know who I'm getting (my food) from. It makes me happy that we have so much trust in the community, since today — I've had a really great experience as far as support from people. One of my really good customers and yoga instructor dropped off a bag of stuff for my family, little gifts and stuff like that. Everyone is rallying together here, trying to keep spirits up."

"I'm optimistic, but it's in my nature to be cautious when it comes to finances, when it comes to business. ... I don't reap the benefits that most of the restaurants do downtown, because of where we are. My margins are slimmer than most. I've gone through this kind of stuff before just because of my location, so I feel like I'm a little more flexible, a little bit more prepared, possibly. ... Hopefully this will continue.

"I've been the underdog for six years. I'm still here. I guess that's very Buffalo — that's why I'm still here, I guess. We'll see if I get through. If I don't, I'll be somewhere else, and it's not the end of the world, there are way more important things in life. If I can't keep this thing afloat, it won't be because of a lack of effort." 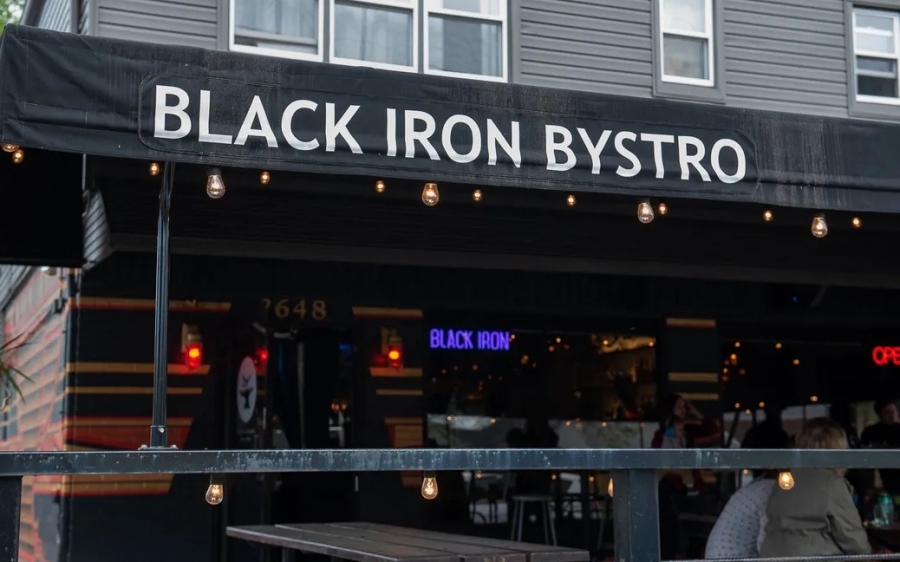 Exterior of Black Iron Bystro. (Matt Weinberg/Special to The News)