The men’s NCAA basketball tournament would have begun in earnest Thursday. And Gonzaga University – the only Jesuit college in the world named for Aloysius Gonzaga – would have been a No. 1 seed.

Gonzaga is the patron saint of youth, which always made him a suitable saint for March Madness. He’s also a patron saint of those who suffer from epidemics and plagues, which makes him sadly suitable as a saint for today’s troubles.

There’s a statue of Aloysius Gonzaga on the campus named for him. He is depicted carrying in his arms a victim of the plague that swept Rome in the late 16th century. He gave his life to minister to the sick and dying.

As it happens, there’s a statue of Aloysius Gonzaga in Buffalo, too. You can find it near the altar at St. Michael’s Church, the Jesuit parish on Washington Street. Rev. Fred Betti placed it there last week as a devotional focus in this anxious age of the coronavirus.

How a badly beaten-up statue made its way from a demolition site to a great downtown church is a story in its own right. It turns out Betti and his father, Fred Sr., have been restoring damaged church statuary for three decades.

They discovered the statue of Aloysius Gonzaga while touring Holy Apostles SS. Peter and Paul School in 2009, before the school was set to be torn down.

“We were wandering through the classrooms and I saw this cloakroom in the back,” Betti says. “So I turned the corner and there was good old Aloysius – like somebody standing right next to me.”

The cymbal crashes of metal strippers at work echoed through the building as Betti assessed the condition of the plaster saint. 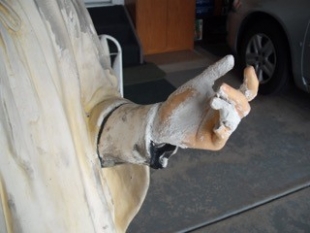 The statue was in rough shape when Betti and his father got ahold of it. (Photo courtesy of Rev. Fred Betti)

“The statue was badly smashed and damaged,” Betti says. “The hands were broken. Someone had used house paint to patch the face at some point.”

Betti and his father picked up Aloysius, one at each end, and took him from cloakroom to classroom to hallway.

“We literally carried him down the stairs like a body,” Betti says. “The metal strippers were sending copper piping down a chute right next to us.”

It took them about a year to work Aloysius back into shape. Then Betti moved the rejuvenated statue to the chapel at Canisius High School, where he was director of campus ministry.

“And when I moved to St. Mike’s in 2016, I took him with me,” Betti says. “He’s been in the back of the church ever since” – until last week, that is, when he was moved up front, given his significance in the modern-day plague that is the coronavirus.

“He’s there temporarily,” Betti says, “for people to pray in this tough time.”

There are prayer cards available near the statue. Betti adapted the prayer from a longer one he found online that asks for the intercession of Aloysius Gonzaga. Here’s a part that Betti wrote himself:

“May the Lord bring healing to the sick, wisdom to medical professionals, prudence to our civil leaders, charity toward all, and hope to those who are discouraged.”

Betti invites Western New Yorkers of any faith, or no faith, to visit – while maintaining a discreet distance from other visitors, of course.

“Public Masses are suspended in the diocese for an indefinite time,” Betti says. “But St. Michael’s being St. Michael’s, people come here from everywhere, including the homeless and the poor, so we are open from 7 a.m. to 5 p.m. during this time. And people are invited to come in and pray or spend time in reflection.”

Aloysius Gonzaga was born into privilege in Castiglione, Italy, on March 9, 1568. (So he was in on this March Madness stuff from the start.) He forsook the life of a nobleman for a life of poverty and prayer when he joined the Society of Jesus in 1585.

The plague broke out in Rome in 1591. Aloysius Gonzaga tended to the sick at a Jesuit hospital and kept working there even when advised of the mortal peril. He contracted the contagion and died in June of that year. He was 23.

“Aloysius has always been invoked in times of epidemics,” Betti says. “In 1991, on the 400th anniversary of his death, John Paul II declared him as patron of AIDS patients and AIDS caregivers.”

The name Gonzaga has come to be synonymous with basketball over the years as the university in Spokane, Wash., emerged as that rarest of college hoops entities – a mid-major powerhouse. Some of its fans delight in calling their saint “Aloy-swish-us.”

We won’t get to see the Zags try to play their way to the Final Four this year. That’s OK. Their namesake saint is needed elsewhere this time.

He’s here to remind us of the suffering of so many coronavirus patients, in his native Italy and beyond, and of the saintly qualities of the caregivers who work on the front lines of this plague – from Western New York to Eastern Washington and around the world.