Charlotte Shultes was standing six feet inside the doorway of her West Seneca home, wearing a sky-blue bathrobe and a tender smile. It was 12:08 p.m. on a Wednesday afternoon.

“Would you like a coffee?” she asked Joe Szychowski, who had just left a pair of meals on the floor inside her door.

Usually he wouldn’t do it that way. On a normal day, Szychowski could have handed Shultes her lemon pepper chicken with sweet potatoes and peas. He could have even put the cold meal – a sandwich with milk and fruit – in her refrigerator for later.

Maybe he could even stay for a coffee, or at least a conversation.

But this isn’t a normal day, or a normal time. He can’t stay to chat too long. He can’t even get too close. That’s why the food is on the floor. He had to place it on a flat surface, and let her pick it up when he leaves.

In this new normal, he couldn’t do coffee.

“No,” Szychowski said. His words were direct, but his eyes were gentle behind his thin-framed glasses. “I’m on a job.” 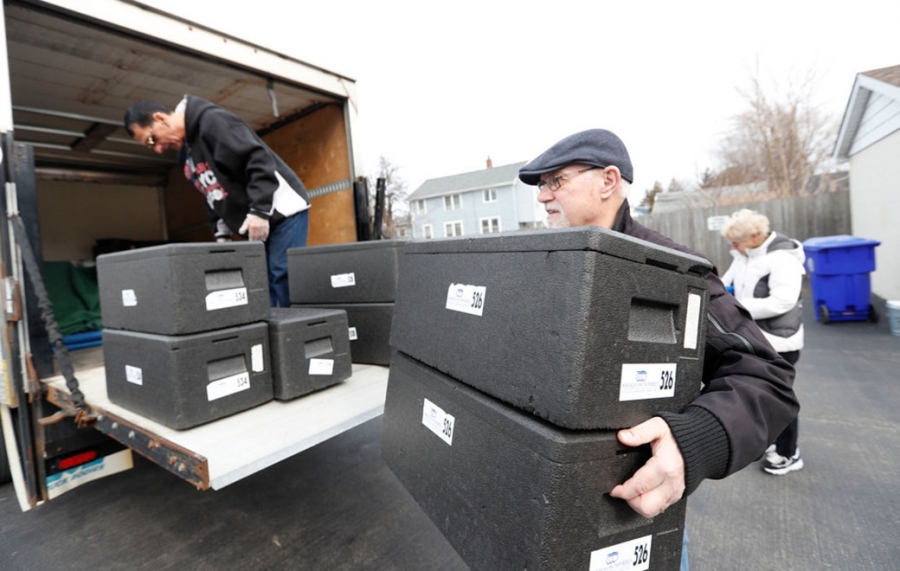 Joe Szychowski picks up the meals for his FeedMore WNY deliveries in West Seneca from a truck that arrived at New Hope Methodist Church. The food is prepared in FeedMore's Buffalo commissary by TRIO Community Meals and was delivered on Wednesday by TRIO's Frank Nagy, in the background. (Sharon Cantillon/Buffalo News)

Szychowski is a volunteer meal-delivery driver for FeedMore WNY, the large nonprofit agency formed when two organizations – Meals on Wheels for Western New York and the Food Bank of Western New York – merged last year. He began this volunteer work six years ago, not long after he retired from his job as a custodian at West Seneca West Senior High School.

Or it did depend on that.

Now, his delivery protocol is shaped by the outbreak of the novel coronavirus, and it begins even before he gets to the door.

Minutes earlier, when Szychowski pulled his black Nissan Sentra into Shultes’ driveway, he dialed her number on his cellphone. He had to give her instructions on social distancing.

“Hello, this is Meals on Wheels,” said Szychowski, using the old name of the organization, which is still more familiar to the public. “I’m delivering to the door. You have to be six feet away.”

Szychowski, who wore a black newsboy cap and has a gray goatee, has a knack for speaking crisply but warmly. COVID-19 guidelines mandate social distancing, which is vital for people in their 70s and older, like Shultes. But they clearly are important for all, including Szychowski, who was turning 68 the next day. And there was no being loose or flexible with the distancing, even for a meal-delivery program like FeedMore, which is aimed at providing nourishment not just with food, but also with socialization for people who may not see many, or any, others during the day. (FeedMore’s website reads: “Our dedicated volunteers deliver food and friendship to those in need.”)

“Just open the door, and then stand back,” added Szychowski, who isn’t Shultes’ regular driver.

She asked whether her normal driver was sick. He wasn’t.

“I’m filling in for him today,” Szychowski assured her. “He got switched around.” 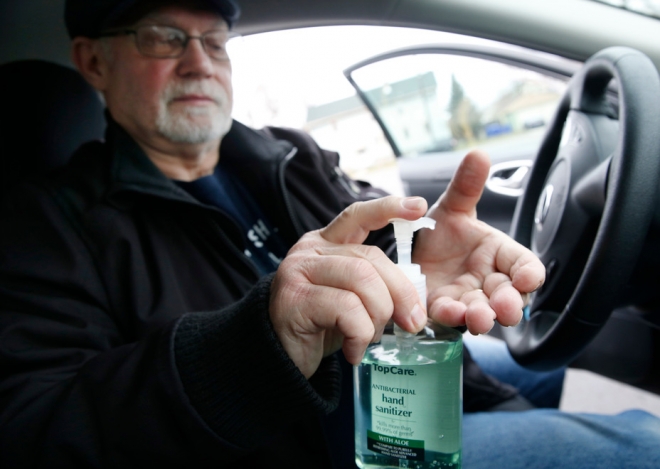 There’s a lot of switching and flexibility happening at FeedMore right now. A couple of weeks ago, the organization was delivering meals to the homes of about 1,800 clients daily in Erie County, Monday through Friday. Another 400 people were served each day in Niagara County, where FeedMore expanded in late 2019 and early 2020. Delivering those meals – which on an average day, exceeded 4,000 trays of food – took about 400 volunteers a day.

In the last several days, a confluence of factors punctuated the importance of FeedMore's home meal program.

First, it was clear the safest place for seniors, who are particularly vulnerable to the novel coronavirus and the disease it causes, COVID-19, is at home. Going out to eat – even if they are physically able – was not a safe option, and now with restaurants closed, it’s not a viable one either. Many of FeedMore’s clients are homebound already. Most are over age 60 who have trouble shopping or preparing meals. Some are younger, and living with a disability or terminal illness. They pay what they can for the food once a month. And if they can’t pay at all, they still get the meals.

Second, Erie County Senior Services shuttered its Stay Fit Dining Program when the likelihood of a local outbreak became clear. The Stay Fit program provides a low- or no-cost lunch at senior centers around the region. That move quickly put a couple hundred more people on FeedMore’s home delivery books. By the end of this week, FeedMore officials expect up to 300 additional clients, with more likely to come.

They’re seeking volunteers both to make home deliveries, like Szychowski does, and to help sort and package emergency food kits in the agency’s Buffalo warehouse. They point out that while the coronavirus challenge accentuates the need for help, the agency has long needed more assistance. “We always are short volunteers,” said Catherine Shick, communications director for FeedMore. “I do hope more people reach out to us and stay with us even beyond the outbreak.”

This could be an opportunity for displaced workers who are looking to help in the midst of the crisis. Most of FeedMore’s home-delivery volunteers are retirees.

“We’re old people delivering to old people,” one of them was overheard saying lightheartedly late Wednesday morning, when a dozen or so volunteers, including Szychowski, gathered in a West Seneca church parking lot to get their meals from a delivery truck. 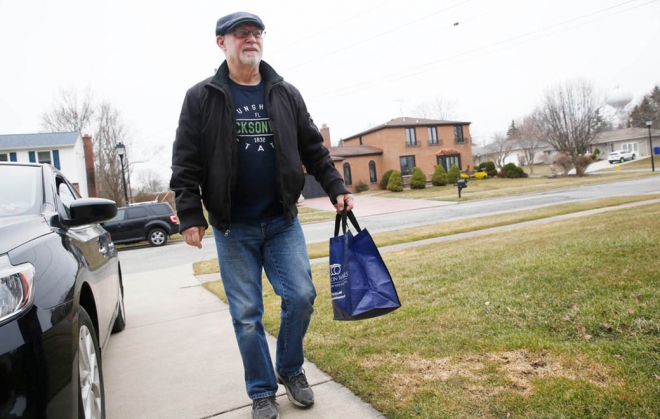 In normal times, that makes sense: Retirees are the people most available during the day. But these times aren’t normal – or otherwise joyful. Volunteers like Szychowski find happiness in doing something purposeful. “This is tremendous,” Szychowski said. “People are needing these deliveries. And it’s been good for my heart, too.”

Szychowski calls clients like Shultes “super seniors” — people who are advanced in age, but “they’re thriving, they’re not just surviving.” Shultes did manage to have a quick conversation before Szychowski and the people with him – two News journalists and a FeedMore official – had to leave. She mentioned that she just returned to West Seneca from an 11-month stay in Oklahoma, where her daughter lives.

And then she asked one final time, “Are you sure you wouldn’t like a coffee?” 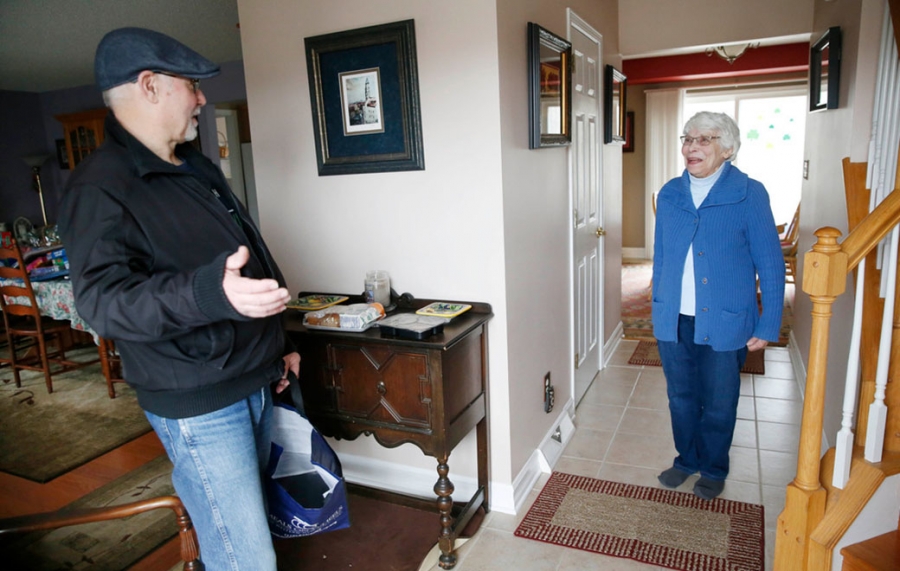 Joe Szychowski brings lunch and dinner to client Marilyn Privitere. “I love it,” Privitere said. “Everyone is so nice. Everyone is great. It’s like having friends.”(Sharon Cantillon/Buffalo News)