Charlie Buscaglia and his women’s basketball team at Robert Morris University would have played a first-round NCAA Tournament game this weekend. Alas, the coronavirus pandemic stole the Colonials’ moment.

They share that hardship with dozens of other men’s and women’s teams, of course, but the Buffalo-born coach also faces something more: eight of his 14 players come from other countries at a time when international travel presents myriad uncertainties.

“We have two from Canada, one from Finland, two from Spain, one from England, one from Japan and one from Mali,” he said. “If they go home, can they come back? We don’t have easy answers.”

Charlie Buscaglia, 40, has been around basketball since he was a toddler, when he’d race his Big Wheel around the court while his father, Sal, coached practices for the women’s teams at Hilbert College.

Fast-forward to 2016, when Charlie succeeded Sal as coach at Robert Morris in suburban Pittsburgh. That makes this a story of father and son, which is not the usual story in women’s sports.

Last summer Sal suffered a heart attack, and it looked at first as if he wouldn’t make it.

Charlie is sorry his players are missing the NCAA Tournament, but he understands issues of life and death.

“I told the kids to stay joyful and appreciate what they have,” Charlie said, “because this is bigger than basketball.”

His Colonials went 17-1 in the Northeast Conference this season, which made them the No. 1 seed, with home-court advantage throughout the conference tournament. They beat eighth-seeded Wagner in overtime in the quarterfinals. And then things got really crazy.

“The whole day,” Charlie said, “was an emotional roller coaster.”

He had to send his players the bad news via text because otherwise they’d have heard it first on social media. The next morning, he gathered his team and, by his recollection, this is what he told them:

“The tournament is a great experience, but as much as I wanted it for you, keep in mind the big picture of what the world is going through. As much as we earned this, everybody is going through the same thing.”

Sal is proud of Charlie for his success as a coach, sure, but also for the grace with which he’s handled the ups and downs of the last week.

“He’s calm and cool in pressure situations,” Sal said. “More than I ever was.” 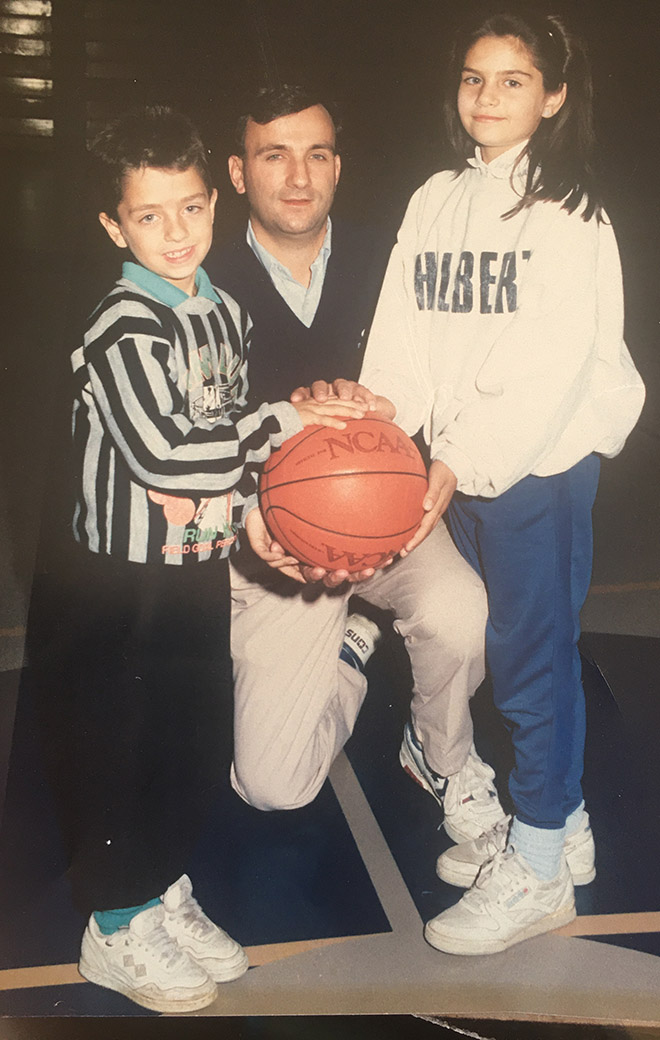 Sal Buscaglia poses with his son Charlie, 9, and his daughter Deanna, 11, in 1988. (Photo courtesy Charlie Buscaglia)

Sal was cool enough to win more than 700 games in his 39-year career, earning him membership in the Greater Buffalo Sports Hall of Fame. He coached Hilbert (253-55 in 12 seasons), the University at Buffalo (five 20-win seasons in eight years) and then Manhattan College (from which Charlie graduated) before landing at Robert Morris.

“When I started coaching in 1977,” Sal said, “people didn’t understand Title IX and what it means for giving women the same opportunities to reach their dreams.”

Sal graduated from Bishop Fallon High School in 1972, just weeks before Title IX was signed into law. Charlie was born in 1979, just weeks before the U.S. Department of Education released a policy interpretation putting teeth into the law’s underlying regulations.

“We’ve made progress since then, but we need more,” Sal said. “Women’s sports deserve a central place in American culture.”

Charlie grew up on Albany Street, on the West Side, before the family moved to Hamburg. He spent the first 18 years of his life hanging around his father’s teams and the next 18 as an assistant coach on those teams.

And in the four seasons since succeeding his father, he’s been conference coach of the year four times.

The urgent call from his sister, in Buffalo, came one evening last June.

“She told me, ‘Dad had a heart attack. They don’t know if he’s going to make it,’” Charlie said. “So we rushed to Buffalo, and by the time we got there, they told us it was over. They said, ‘Say your last goodbyes. He isn’t going to make it.’”

Doctors offered one last hope, something akin to a half-court shot. It involved putting Sal on a life-support machine called ECMO, which stands for extracorporeal membrane oxygenation. 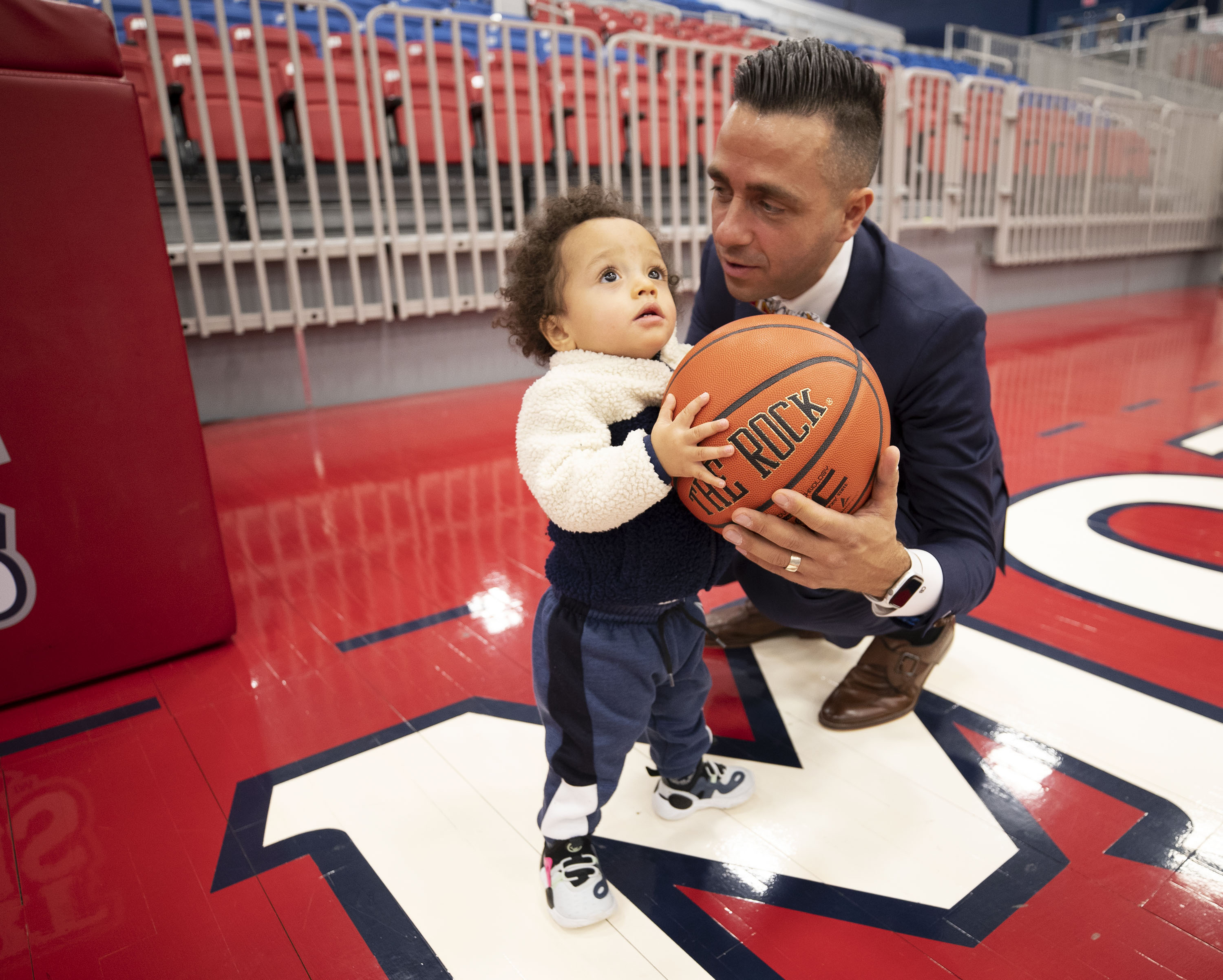 “He was back. It was a miracle right in front of our eyes.”

This season, Sal has traveled from Buffalo to all of the Colonials’ home games and most of their road games. He was there for last week’s NEC quarterfinal win and was on his way to the semifinal game when word arrived that it was canceled.

“We had a historic season, 17-1 in the conference,” Charlie said. “And then they told us we were going to the NCAA Tournament. And then it was all over.”

Now Charlie’s days are consumed with determining what’s best for his foreign-born players in this time of travel uncertainty. And he’s been spending more time with his wife, Roseline, and their son, Saso, who is 17 months old.

Saso isn’t driving a Big Wheel at his father’s practices yet, but who knows? Maybe son could succeed father all over again some day.

Basketball, after all, is the family business.