That's the word for parents struggling with the new normal of daily life: working from home, juggling jobs and day care or dealing with schools closed for at least a month because of the COVID-19 pandemic.

Here's a look at how six local families are coping.

Working from home hasn’t been easy for AmyRae Nessa.

Her days are split between keeping her two kids on task with schoolwork and, as director of events for Buffalo and Erie County Botanical Gardens, soothing nervous brides-to-be, whose upcoming nuptials are being canceled.

Both take time – and patience.

“Trying to be on the phone with a crying bride and having a 7- and 8-year-old who feel this is a snow day has been interesting,” said Nessa, 39, of Buffalo.

Nessa’s daughter, Eloise, a third grader, and son, Rex, a second grader, both get an hour online with their West Buffalo Charter School teachers and classmates. The kids tend to breeze through their schoolwork.

So Nessa tries to keep them occupied – reading for 30 minutes, making Easter decorations or taking them for a walk around the block.

As for Nessa, she was able to stay on top of phone calls to customers early in the day on Wednesday. She planned on getting more work done in the afternoon, when her husband was due home, then finish up in the evening.

Three days before schools were closed, Anne Noonan-Pahl of the Town of Tonawanda made a schedule of schoolwork, exercise and chores for her children: Maya, 10, Natalie, 9, and Penelope and Elijah, who turn 4 on Wednesday.

"The schedule has been helpful. Even if we're not on track, I know what to do next," she said.

Jonathan Pahl, a software engineer, works from home when not traveling for business. The children already know that when the door to his office is closed, don't come in because he's on the phone.

The children are missing their friends, and sometimes they are grumpy, Pahl said.

"I think a lot of us are praying for patience," she said. "We’re trying to not be snippy."

Her goal is to be positive, so the children will pick up on that.

"As long as we keep that steady brave face on, they just follow suit," Jonathan Pahl said. 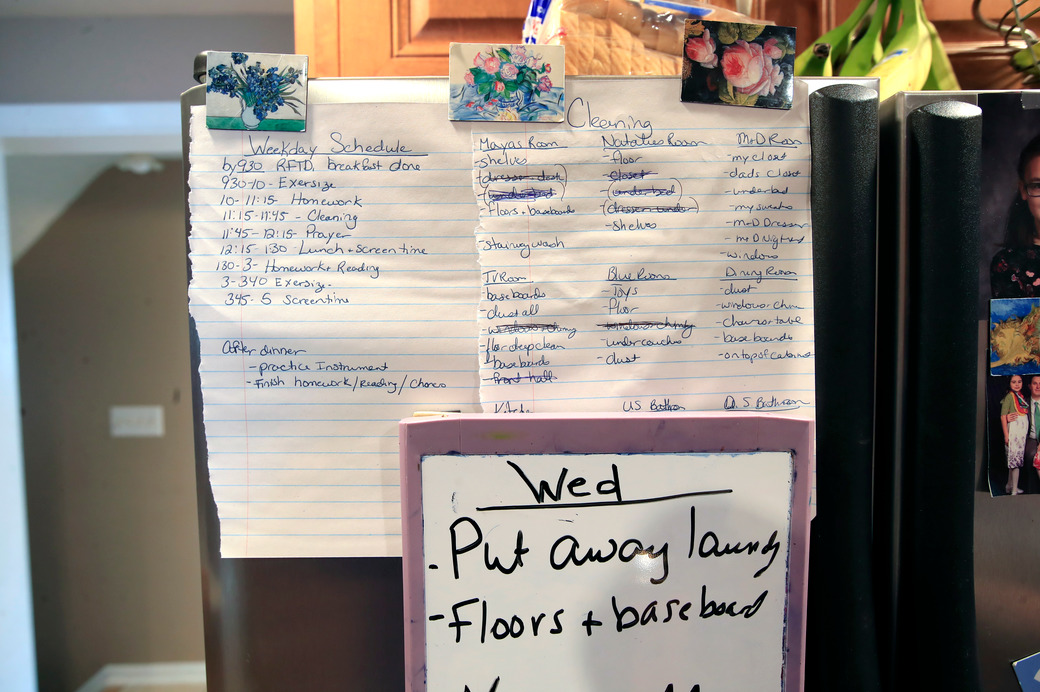 The daily list created by Anne Noonan-Pahl for her children while they are home from school as a result of COVID-19, on Wednesday, March 18, 2020. (Harry Scull Jr./Buffalo News)

'We can't all pretend we don't have kids at home'

Lauren and Steve Molenda choose to keep their 4-year-old daughter Millie home – even though they still have to pay more than $250 a week to the private day care that runs her prekindergarten class.

“We felt it was socially responsible to keep her home,” said Lauren, who co-owns a local advertising agency.

As much as possible, they’re trying to replicate her school routine, including doing crafts, reading books and playing outside. Each night, the East Aurora couple compare schedules so that one of them can always be available.

It’s been an adjustment. Before last Friday, Lauren worked from her office. Steve, a global director of marketing for his company, traveled internationally. Millie had been used to having their attention whenever they were home at night and on weekends.

Now she’s been learning she needs to wait to talk to them when they’re on the phone, for instance.

“When your kid comes to you and they’re so excited about something, it’s hard to turn them away,” Lauren said.

Things have gone pretty well so far. But it’s only a matter of time until a conference call gets interrupted.

“No matter how high up you are, no matter what your job title is, you might have a 4-year-old behind you,” she said. “Everyone is giving everybody a lot of grace adjusting to this new normal.”

Millie Molenda, 4, watches a video on an iPad in a window nook while her father, Steve, works from his home office. (Photo courtesy of Lauren Molenda)

Eight-year-old Walter Lavin has been learning Spanish on Duolingo. He’s studying about hippos and porcupines online through the Cincinnati Zoo. He’s doodling along with author Mo Willems through the Kennedy Center’s website.

And the Forest Elementary student has also been lobbying for more screen time. 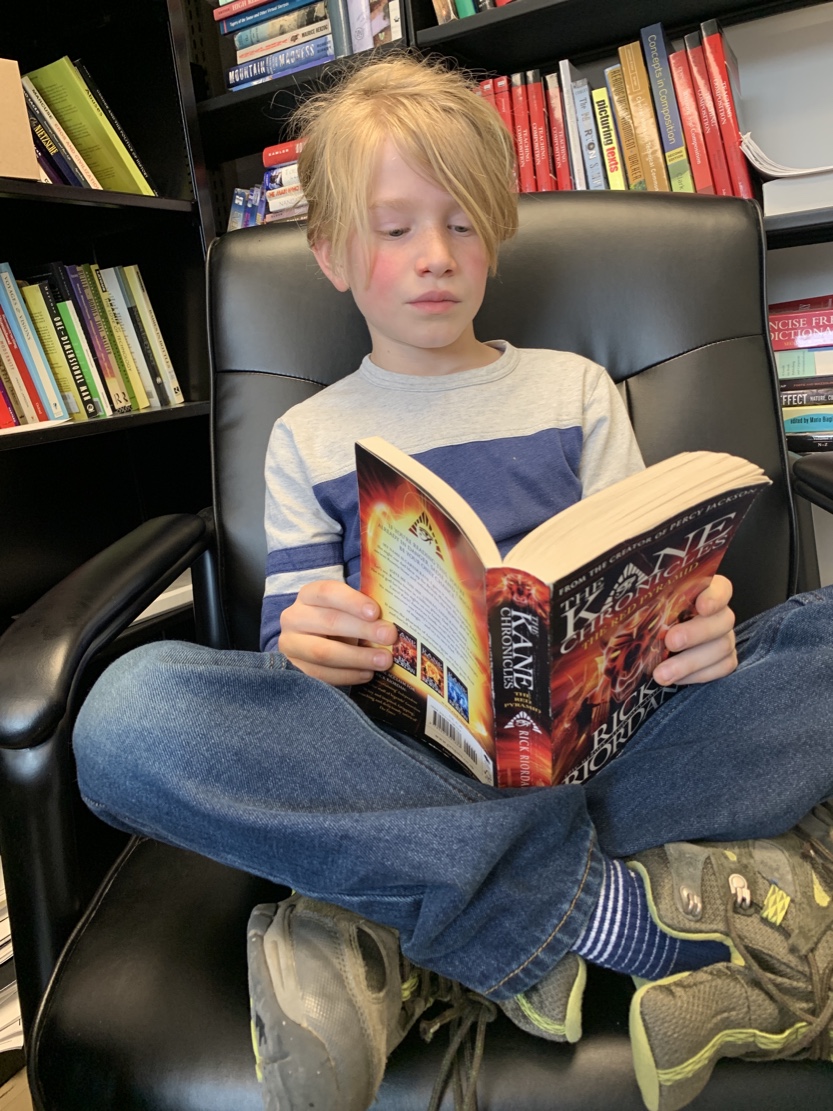 Walter Lavin, a third grader in Williamsville, reads in his mother's office at the University at Buffalo. (Photo courtesy of Elizabeth Mazzolini)

Normally, he’s allowed 30 minutes of video games on weekdays. This week has been anything but normal. He’s pushing hard to play more "Jurassic World."

“Every moment he was done with a task, he was like, ‘Can I play video games?’ ” said his mother, Elizabeth Mazzolini, a professor at the University at Buffalo. “We said you have to stop asking that, and you can’t treat that as your only option. We told him to read.”

And so he has been diving into the "Kane Chronicles" by Rick Riordan.

Krystle Callari has the same quandary as many others.

She’s a single mother trying to work and figure out childcare for her 3-year-old daughter, Alba.

“I was able to start working from home two days a week, but the other three days I’ve been basically playing hot potato with relatives or a babysitter to see who can watch her,” said Callari, 35, of Buffalo.

So, Callari dropped off Alba at her parents Monday and Tuesday. But they are in their 70s and Callari is worried about spreading the virus to them.

And while children don’t seem to be as likely to fall ill to the virus, Callari wonders what happens if she, as the mom, gets sick.

“When you have a 3-year-old, they like to do things like lick you or sneeze in your face,” Callari said. “There’s no quarantine with a 3-year-old. If she gets sick, you’ve got to expect to get sick.”

Jessica Palmer is used to being home with her three children.

But this week, the stay-at-home mom put her at-home baking business on hold.

Five-year-old Ellie is out of her pre-K class at Watermark Church, and she misses it. She asks her parents if everything is OK.

Hudson, 3, is sad his ice skating program shut down. Since there's no school, the kids want to know why can't they go places, or have a play date?

"It's hard to explain to them we've really got to limit it," Palmer said. "It's taking a lot more patience than normal."

Bedtimes for the kids are a bit later, and there's more popcorn and movies.

"I think emotions have definitely been heightened with the kids, maybe because ours are," Palmer said. "Even though I’m a stay at home mom, it really feels complete different. You almost feel stuck."

Want to share your story with us? Email us at schools@buffnews.com.