Niagara County's first confirmed case of COVID-19 is a 42-year-old woman with a compromised immune system who has been hospitalized in Niagara Falls Memorial Medical Center, officials said Wednesday morning.

It is a case of community spread of the coronavirus disease, Niagara County Public Health Director Daniel J. Stapleton said.

"The inevitable has been confirmed," County Legislature Chairwoman Rebecca J. Wydysh said. "But, as you know, we've been operating like COVID-19 was already here, because, quite frankly, we knew it was."

The patient's contacts are being investigated.

"We've been working on that since last night, early this morning," Stapleton said at a news conference in Lockport. "We need to contact the people who might have been at a get-together, a party, whatever it might be. That's one of the main reasons why we're telling people, don't go to big crowds. This is a perfect example of why people should be staying home, should not be in large crowds."

Asked if the woman had been at a party, Stapleton said, "Those are the types of things we need to find out."

After the news conference, Stapleton said county staffers were talking to the patient's family members.

"Most people who are quarantined will not be tested. We have our second person leaving quarantine today. They were asymptomatic of those symptoms. Once again, when you have limited resources, you don't test everyone. You test people who are showing symptoms," Stapleton said.

"It's important that people realize that we expect, we believe that there are a number of positive cases throughout Niagara County and New York State that have yet to be identified," Stapleton said during a news conference at the Warren J. Rathke Public Safety Training Facility.

Wydysh confirmed that the patient is in Niagara Falls Memorial.

"She is in isolation," Stapleton said.

In an interview after the news conference, he said the woman was hospitalized after going to her physician with COVID-19 symptoms "consistent with seasonal flu." He refused to discuss specifics.

Stapleton said the woman was from the western region of Niagara County, which Wydysh defined as Niagara Falls, the Town of Niagara, Lewiston and Porter.

"The reason we are doing this is because we are a much smaller subset in Niagara County," Wydysh said, "which makes it much easier to identify who that person is if we give you a very specific town, village or city."

She said the positive case was not one of the previously quarantined individuals in the county. There were 14 such people as of the time the county made the announcement Tuesday night, but Stapleton said the quarantine number had risen to 22 as of Wednesday morning.

People with compromised immune systems, such as the Niagara Falls patient, do not have optimal ability to defend against illnesses. According to the Centers for Disease Control, people with compromised immune systems are one of the groups who are at greater risk for severe illness from the novel coronavirus, along with older adults and persons with underlying health conditions.

Stapleton said there are four COVID-19 tests pending on Niagara County residents and that he hopes to see those results within the next 48 hours.

"All of those individuals are asymptomatic, meaning they do not have symptoms," he said. "They are quarantining in their homes."

Later, he said the number of self-quarantined individuals may be greater than officials know.

"When you have symptoms consistent with coronavirus, then we tell people, isolate yourself, separate yourself," Stapleton said. "There are people who are self-quarantined in their homes that we're not aware of, because they're not required to inform us if they visited one of those that was not under limitations prior to this past week." 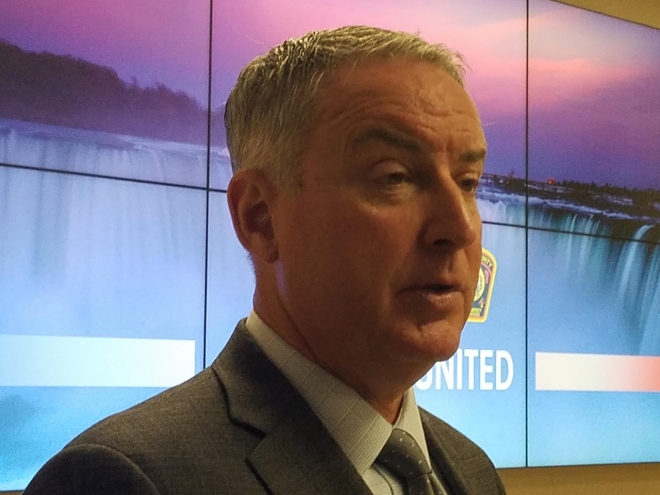 For those who cannot safely quarantine themselves because of circumstances in their homes, Stapleton said the county has lined up the former Inter-Community Memorial Hospital in Newfane. The county announced a deal Tuesday with Eastern Niagara Hospital, which owns the Newfane site and closed it last year.

Stapleton said the capacity of the Newfane site would be 32 people, less than half of the 71 beds it was licensed for as a hospital, but Stapleton said quarantine rules require each patient to have a private room and a private bathroom. He said the site is ready to open immediately.

Stapleton expressed frustration about the turnaround time for testing, saying that the state told him Niagara County was "in the queue" for testing resources. He was hopeful that an increase of facilities that can process tests, including private labs, would reduce the processing time.

But for now, the Niagara County Health Department has the capacity to test only about half a dozen people per day.

"We are waiting on supplies from the state," Stapleton said. "We have staff ready to roll, it’s just getting those supplies. That’s what is restricting us right now."

Stapleton said Niagara County will open a drive-thru testing site when the state fills his order for 1,500 test kits, but it is not known when that will happen.

He wouldn't disclose the planned location.

"We want people to pre-register. We don't want people just showing up in their car," Stapleton said.

Niagara County is not equipped to do its own COVID-19 testing. The few tests it has done are sent either to Erie County's lab or the State Health Department lab in Albany.

Wydysh, who expressed concern for social distancing several times during the news conference, said that Wednesday's news conference would be the county's last, for precisely that reason.

There were far fewer officials gathered around the podium than there were at a similar news conference Sunday in the same room.

The announcement about the first positive test for the coronavirus disease came Tuesday night via a news release in which Stapleton said "all of our protocols are now underway."

The Erie County total is 20 cases of COVID-19 as of Tuesday night. Erie County is expected to have a news conference Wednesday afternoon with more updates.