The end is very near for Elvin “Bill” Hanley, a hospice patient in a local nursing home, according to his loved ones.

His wife and daughter want to be at his side, but the nursing home has banned them from visiting because of state efforts to halt the spread of the highly contagious novel coronavirus.

“When they shut down visiting, I said, ‘Can’t I go in?’ They said, ‘No, not until the last few hours of life.’ They said they will call me,” Miriam Hanley of Niagara County said of her plea to be at her husband’s bedside.

Gov. Andrew Cuomo instituted a mandatory ban on visits to nursing homes last Thursday. Since then, Miriam Hanley said her only contact with her husband of 33 years has been through brief phone calls. 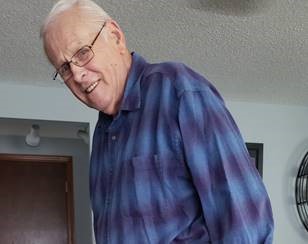 Elvin "Bill" Hanley is in a hospice bed at Northgate Health Care Facility in Wheatfield. His family expects him to die any day. Because of the state mandated COVID-19 precautions, his wife and daughter have been told they cannot visit him.

She said she expects him to die any day now from kidney failure.

Hanley, 76, is in a hospice bed at Northgate Health Care Facility in Wheatfield, about 2 miles away from his 61-year-old wife’s home in the town.

The governor ordered the visitation ban in an effort to prevent the spread of the highly contagious COVID-19. The older population in nursing homes, he said, was at high risk of experiencing respiratory complications from the virus.

And while Hanley cannot have visitors at Northgate, he could if he were a patient at Hospice Buffalo in Cheektowaga or Niagara Hospice in the Town of Lockport.

Workers at those two facilities said visits are permitted because they fall under the exemptions of compassionate care and end-of-life treatment.

However, individuals are first screened and can be denied a visit if it is determined they are ill, such as having a fever, or have been out of the country, according to workers.

Miriam Hanley and her daughter Karoline Hanley said they have not had fevers or traveled outside the country.

They include diabetes, dialysis for kidney disease, blockage in his right carotid artery and a stroke. In February after a toe on his left foot was amputated, he was admitted to Northgate for rehabilitation.

Hanley suffered internal bleeding several days later while he was receiving dialysis and was taken to the intensive care unit at Kenmore Mercy Hospital.

A week later, he returned to Northgate and on March 6 received what would be his last dialysis treatment at an off-site location.

“He was getting so depressed, things were not getting better,” Miriam Hanley said of his decision to stop dialysis and enter hospice.

On Thursday, before the visitation ban was implemented, he was transferred to a hospice bed in Northgate.

Informed of the ban

Miriam Hanley said she was shocked when she was told by Northgate employees that she would no longer be able to see her husband until his final hours.

“I went at 4:30 Thursday afternoon to visit him and at 6:30 they pulled me out of the room to let me know as of Friday there would be no more visitors.

“I was in disbelief. They said there have been too many people coming in and they have to be careful for the other hospice patients and the general residents,” the wife said.

A few of Hanley’s cousins and his brother had visited with him earlier on Thursday, Miriam Hanley said. “The cousins had just lost another family member that was in hospice care that week in Pennsylvania and have known Bill has been suffering.”

Karoline Hanley, the couple’s only child, said she has not seen her father since last Wednesday.

“It is rough. It is his final days and I can’t spend that time with him. I don’t feel like we have any resources we can complain to,” the 31-year-old daughter said.

The Buffalo News contacted the New York State Health Department to ask if the Hanley family’s situation was being handled according to guidelines.

A Health Department spokeswoman issued a statement that appeared to support the Hanleys' desire to visit: “The visitation guidance for facilities clearly states that visitors are allowed for end-of-life circumstances.”

The statement also pointed out that state health officials are working with nursing home providers “to provide support that strikes a balance between health and safety and compassion.”

Dawn Harsch, communications director for the McGuire Group, which operates Northgate, offered a statement that appeared to contradict the claim that Hanley is dying.

Harsch also raised the option that his relatives could opt for hospice care at home.

"If they would rather take him home for home hospice, there would be no restrictions on this. Our goal at Northgate, as mandated by CMS and NY State, is to protect the health and safety of all 200 residents and 300 plus staff, and we are following the guidance set forth," Harsch stated.

The only relief Miriam and Karoline Hanley have received, they said, has come from fellow members of First United Methodist Church in North Tonawanda.

“A couple of the families have brought food to help with meals so that is one less concern,” Karoline Hanley said. “They have also been praying for us.”

But the frustration of not being able to spend time with Bill Hanley in his last days weighs heavily on the mother and daughter.

Miriam Hanley says she takes her cellphone with her wherever she goes, waiting for the call that her husband is in his final hours and they can at last see him.

She says that is no way to treat the living or the dying.

“It just is unbelievable with the way the situation is going,” Miriam Hanley said.