Memorial services canceled or scaled back.

Bar and bat mitzvah ceremonies with only immediate family allowed to attend.

As the growing threat of the novel coronavirus upends every aspect of daily life, religious institutions also are adapting to this new reality.

"In our minds, it's morally imperative to say, even in worship, we are staying physically separate but socially, spiritually close," said the Rev. Joan Montagnes, pastor of the Unitarian Universalist Church of Buffalo in the Elmwood Village, which is holding services without a congregation but sharing them online.

Churches, synagogues and mosques are making unprecedented changes to limit the spread of COVID-19 – at a time when Christians prepare to celebrate Easter and Jews get ready to mark Passover.

Many have closed their doors to the public, banned members from attending weekly services and limited or entirely shifted online the many outreach and ministry programs they offer.

Weddings, funeral services and traditional coming-of-age ceremonies all are canceled or face severe restrictions on attendance. Religious leaders are getting creative and using technology to assist them. 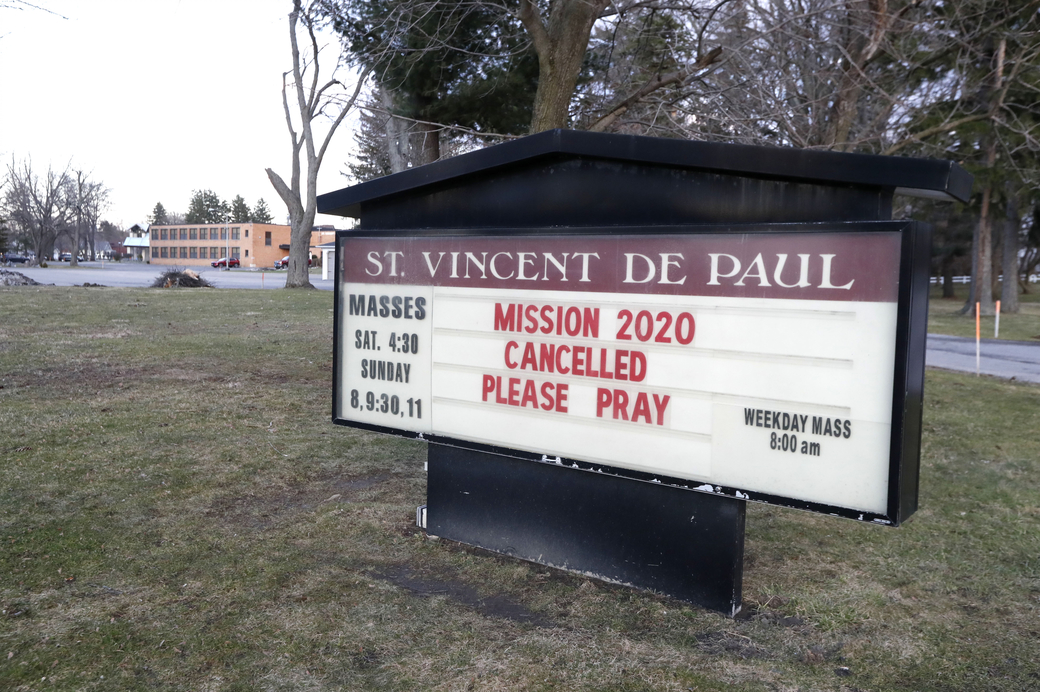 The sign on the front lawn of the St. Vincent de Paul Church in Elma informs people that the 2020 Mission week has been canceled. (Robert Kirkham/Buffalo News)

They are trying to balance meeting the spiritual – and social – needs of their congregations while preserving the health of their members and the wider community. And to make the best of a time of great uncertainty.

"I feel this is an opportunity to promote kindness and generosity of spirit in a way that I think has been completely diminished over these past several years, if not decades," said Cantor Penny Myers of Temple Beth Zion.

Parish events and larger gatherings including confirmations are suspended until further notice.

Funerals will continue with only immediate family present until further notice.

The actions come at the one of the most solemn times of the year for Catholics, said the Rev. Michael H. Burczynski, pastor of St. John Gualbert in Cheektowaga and administrator at St. John Kanty and St. Adalbert Basilica.

“It’s Lent. We’d like to be in service. There are no stations of the cross, no daily Masses,” said Burczynski. “We do celebrate a private Mass each day – priests do it for each other."

Temple Beth Zion went ahead with its celebration of the typically festive Purim holiday on March 10 but saw a smaller crowd of about 60 people at its suburban location in Amherst, said Myers. She said the synagogue, the region's largest, has canceled its Hebrew school that serves more than 100 students and moved its services to online only.

"We have been following the recommendations from the county religiously, no pun intended," Myers said.

She said if any choose to go forward, only parents, grandparents and siblings can attend in a sanctuary that holds at least 1,000 people. Other guests will watch on video, Myers said.

Myers is conducting the meetings she holds with those young people prior to their bar or bat mitzvah through FaceTime video phone calls. "Thank God for technology," she said.

For members of the Lackawanna Islamic Mosque, the absence of the Five Daily Prayers practice has one of the largest impacts for people who attend the service, said Anwar Al-Kalai, the mosque's president.

“We are asking everyone to pray at home instead of coming to the mosque," Al-Kalai said.

A large number of people used to gather at the mosque for prayer five times a day – before sunrise, noon, afternoon, sunset and after sunset.

The calls to prayer, except for sunrise, are sounded for 60 to 90 seconds through loudspeakers outside the mosque and may be heard by residents living within a few blocks of the mosque, said Al-Kalai.

Volunteers are stationed at the mosque to remind people prayers are now performed privately at home.

The Unitarian Universalist Church of Buffalo shifted to an online-only service beginning last Sunday and for the foreseeable future, said Montagnes. She said the step was taken for safety's sake and to model an appropriate response to the outbreak for the congregation.

This past Sunday's service included members of the string band, soloists and the music director, more people than will take part on coming Sundays.

Montagnes said she was touched to see how many people followed along with and commented on the service on the Facebook Live feed. The 93 viewers were about half the typical attendance at a service.

"It was an incredibly moving experience," she said.

The church has closed its doors for now but is trying to find ways to serve its members, including nightly check-ins online for religious education participants.

"They are creating community and clamoring for community," said Montagnes, praising the efforts of the director of religious education, Sarah Martin.

Two planned memorial services were canceled, Montagnes said, difficult decisions for the families and the church.

She presided at Sunday's service and said it was unusual but by the end it began to feel like church again.

"You could feel the spirit moving through the space," Maynor said.

Services in an empty sanctuary will last through the rest of March and it leaves the church facing uncertainty as major Christian holidays approach.

"We're not sure what Palm Sunday or Easter Sunday will look like for us," Maynor said, also noting the many services held during Holy Week.

She said the church is moving to online streaming of its Monday morning Bible study and volunteers are coordinating to reach out to all of the church's 800 member families to check in on them.

"We're trying to figure out how to live in this new world where social distancing doesn't necessarily allow face-to-face interaction. But how do we continue to build social interaction, social communication, this community life in other ways?" Maynor said.