Due to a pandemic of epic proportions that is spreading across the globe, this is a good time to give thanks, take a breath and show our appreciation for all of the hard work protecting our natural resources, enhancing our outdoor sports and working together for a common goal and cause involving conservation.

In what may have been one of the final indoor banquets, functions and gatherings pertaining to the outdoors for the coming weeks (if not months), the Erie County Federation of Sportsmen’s Clubs honored its top conservation leaders for 2019 as it held its annual awards and recognition banquet at Kloc’s Grove in West Seneca on Saturday.

The evening didn’t disappoint as friends gathered to celebrate outdoor achievements and accomplishments to share a few laughs, a few tears and the celebration of an outdoor heritage we all hold dear. It was a perfect distraction.

“Our awards program allows us to recognize the individual efforts and accomplishments that represent our common goals and interests,” said ECFSC President Jeff Jondle. “It provides an opportunity for those who could not attend and are interested and want to know who is working for their best interests. And we hope it serves as an educational vehicle to motivate people to do more and better and join us in these pursuits.”

This year’s banquet took on a different flavor. The Stan Spisiak Conservation Award, symbolic of Conservationist of the Year, was centered on a special group of volunteers rather than an individual. The focal point was the Region 9 Youth Archery Camp that is run every summer by a dedicated group of about 150 people. West Falls Conservation Club, Elma Conservation Club and Hawkeye Bowmen were recognized as major sponsors of the event and they’ve hosted the camp for over 25 years.

“Every year, 30 kids ages 12 to 15 are selected to attend a three-day camp,” said Frank Miskey Sr., awards chairman for the ECFSC presentation. “They learn about nature, bow skills, tracking skills and conservation laws – all working together to learn about what they can do to protect Mother Earth. So far, 750 kids have gone through the program, all becoming better outdoor sports people, environmentalists and conservationists.”

While it’s free for the youths to attend, the cost for this “free” camp is covered by the clubs who administer it. The total bill is roughly $5,000. Accepting the award for the group was Jack Boquin of the West Falls club. He was one of the co-founders of the camp with Jerry Lewandowski. The future of outdoor sports and our natural resources appears much brighter because of these efforts. 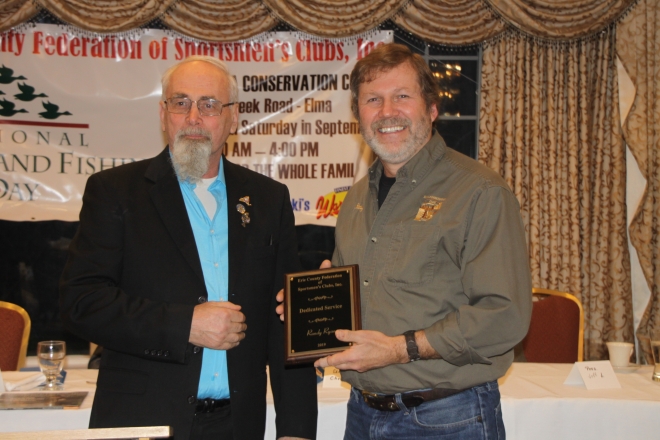 Dedicated Sportsman of the Year was given to Randy Ryan with the Elma Conservation Club for his important role in shooting sports. He has been involved with youth trap leagues, hunter education classes, National Hunting and Fishing Day range use and has assisted in the shooting qualifications for the Erie County Sheriff’s office and the U.S. Marshal’s group. He’s a Boy Scout firearms instructor and teaches firearms safety classes. He was responsible for several range improvements at his club, including raising the protective range berm to a higher level. It’s all about safety and our Second Amendment rights.

The Paul Stoos Memorial Volunteer of the Year went to Bob Avery of Buffalo, a member of the Lake Shore Sportsmen’s Club. While he has only been involved with the Federation for about a decade, he has assisted with the Teach Me to Fish youth programs at Tifft Nature Preserve, Chestnut Ridge, Ellicott Creek Park and Broderick Park. He has been involved with the 4-H Pheasant Program, helps with National Hunting and Fishing Day setup, and mans a crossbow booth for the day. He helps with DEC fish stocking and is an active hunter education instructor, helping with 10 classes the last two years. 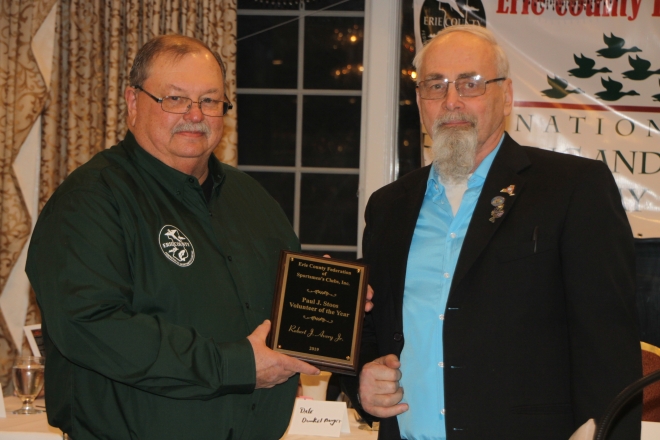 The Paul Stoos Award for Volunteer of the Year went to Bob Avery of Buffalo (left), being presented by Frank Miskey Sr. (Bill Hilts Jr./Buffalo News)

When Avery came up to accept the award, it was bittersweet. His friend and mentor Bob Liljiquest of the Eden/North Collins Gun Club had died the night before. Liljiquest recruited Avery as a hunter education instructor.

Youth of the Year went to Christian Doyle of North Collins, a member of the Erie County Trappers Association. He has earned the Herb Eble Youth Award and the Sgt. Daniel Shaw Youth Award. Doyle is one of the most active junior members in the trapper’s group, assisting with the Erie County Fair’s Conservation Building in August and the National Hunting and Fishing Day celebration every September. He also competes in the state’s high school shooting league and made it to the state finals. 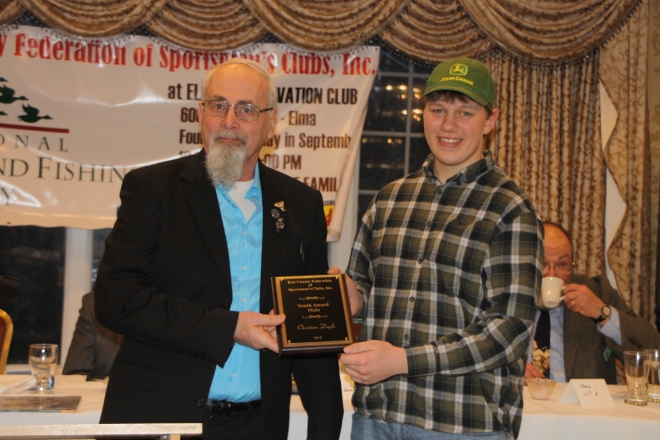 Christian Doyle of North Collins was named Youth of the Year by the Erie County Federation of Sportsmen's Clubs, being presented by Frank Miskey Sr. (Bill Hilts Jr./Buffalo News)

Club of the Year was the Depew Rod and Gun Club, a group that’s been around for 74 years. They have been devoted to conservation and the protection of the environment, planting trees every year on their extensive club grounds. They are proponents of hunting and fishing. The club offers an annual scholarship to Depew High School students and they assist with the Region 9 Archery Camp. Depew Rod and Gun members sponsor disabled veteran hunts for turkeys in the spring and deer in the fall. They lend a hand with Cub Scout Troop 531 and let the Federal Probation Department use their ranges for training and qualification. It’s about time they were recognized for all their hard work.

The Erie County Trappers Association named its Trapper of the Year at the banquet. Ron Shaw of Hamburg was recognized for his volunteer efforts through the years, joining the club in 1979. He has gotten his entire family involved with trapping and conservation. 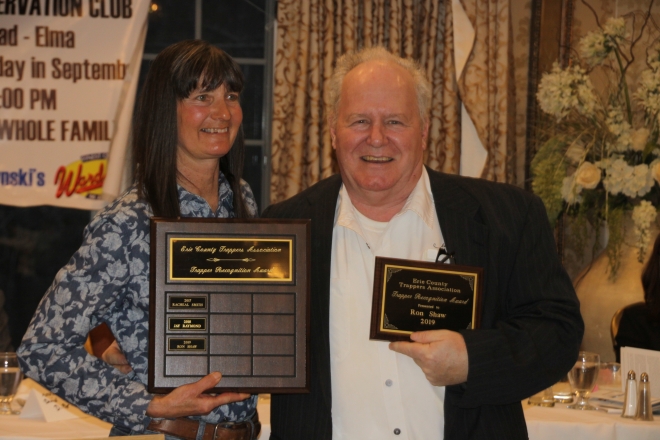 Ron Shaw of Hamburg was honored by the Erie County Trappers Association as Trapper of the Year. (Bill Hilts Jr./Buffalo News)

Special President’s Awards were handed out by Jondle during the banquet. Roxann Ferrazoli from the Hamburg Rod and Gun Club received a plaque in recognition of her substantial extra efforts and work.

“You can't run a great organization without people like her,” Jondle said.

Another President’s Award was given to Sen. Chris Jacobs for “his ongoing support on the conservation issues, wildlife issues, environmental issues, Lake Erie access and Second Amendment issues.”