Despite the pandemic affecting everyone around the world, fishing the local waters of Western New York continues to be an option for a temporary escape. You might be able to catch a fish fry or two as well. Check the outdoors calendar for an updated list of cancellations.

Stream fishing has been good the past week according to Ken Jackson of Sanborn. While he didn’t do well personally, his fishing buddies did, using a mix of jigs, wax worms and egg sacs fished under a float. One of the keys for success was including a little bit of weight on the leader to get bait into the fish zone more quickly. Smaller streams had clear conditions, making things a little more difficult. The midsize streams were ideal. Cattaraugus Creek was almost there, but with rain in the forecast, it will probably set back that stream again. Meanwhile, a few boats have ventured into the lake looking for perch and walleye out of Buffalo. Some big perch and a few walleyes were reported in 51 to 58 feet of water. Remember, walleye season is closed.

Fishing in the lower Niagara River was terrific Monday as double-digit catch days were the norm for boaters drifting a mix of egg sacs and Pautske fire dye minnows. After a slow start, Capt. Frank Campbell of Lewiston reported catching and releasing more than 20 trout, nearly all steelhead. Three-way rigs bouncing the bottom was the way to go, especially upriver as far as Devil’s Hole. If the winds switch to the southwest, throw on a MagLip or Kwikfish. Speaking of wind, there will be something severe blowing in on Friday that could mess up things again, including some heavy rains. Shoreline casters are picking up some fish, too. Mike Rzucidlo of Niagara Falls hit some steelhead on spinners Monday in the gorge. There was 4 to 5 feet of visibility. 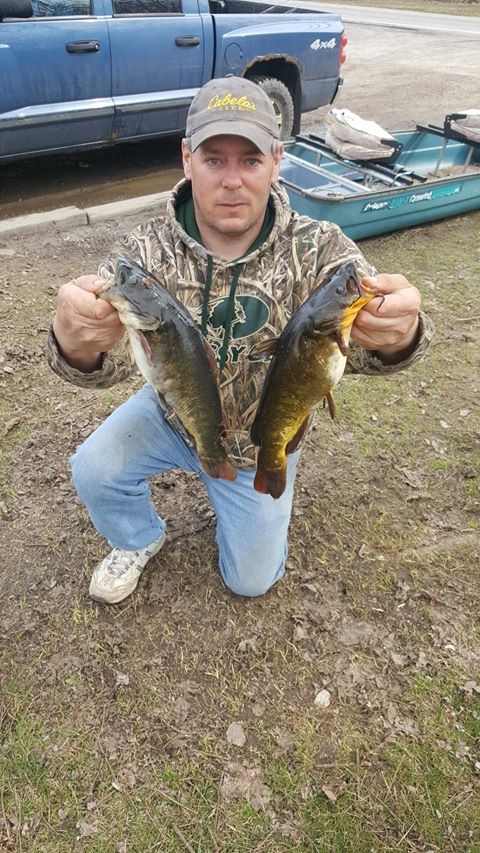 Roy Letcher of Newfane shows off the winning bullheads from 2019. The 2020 Niagara County contest has been canceled. (Photo courtesy Roy Letcher)

Some bullheads were hitting in Wilson and Olcott and Lake Ontario was hitting the magical 40-degree mark. The Wilson Conservation Club announced this week that it is canceling the Bullhead Contest set for April 3-5. There have been good numbers of steelhead and brown trout in some of the main streams after last week’s rains. Best baits have been egg sacs, wax worms and beads tipped with waxies or run clean, according to Ken Jackson of Sanborn. Rain in the forecast will help small to medium streams. To the east, Rob Bierstine at Oak Orchard Tackle reports good action through Monday, with nice, fresh fish and a few darker steelhead. Anglers at the dam have been catching trout consistently. Jigs in natural colors have been the best baits. Flows are dropping and clearing some so probably it will make for tougher action this week. Swamp headwater supplies have been drawing down. Bierstine says anglers are looking forward to more rain, which is forecast for the end of this week. Smaller tributaries are getting lower, probably considered moderate flows; they are dropping and clearing so that makes it tougher. There is a fair amount of spawning taking place in smaller tributaries. Bierstine insists that you have to hit the high-water window instead of waiting too long and finding low and clear flows, as well as old fish.

Crappie started running in the marina canals last week according to Mike Sperry with Chautauqua Reel Outdoors. It’s been hit and miss for fishermen, with the best and biggest fish being caught after dark. Emerald shiners and jigs on the micro side are working best, such as 1/100-ounce, 1/64-ounce and 1/32-ounce sizes. Tube jigs and Cubby Mini Mites are producing as well. Fishermen in boats are landing some in the Bemus Bay area. Water is still very cold, so the best bite is yet to come.

It’s the last of the ice fishing action in Lake Simcoe and it is out of reach for U.S. anglers since new border restrictions were put into place Wednesday. Whitefish action that has been good for most of the winter ended with a bang on Sunday, the last day of the season. Wil Wegman reports he found them in just 20 to 25 feet of water in the north end, but even his buddies fishing much further south got on them, too. Lakers continued to be caught right up until closing day as well. Now it’s all perch. “For the last two winters I’ve been out after perch until early April, but I doubt very much we’ll even get into the end of March this year,” Wegman said. “We were practicing our version of social distancing out on the ice. In fact, the only two other anglers and I stayed at least 500 yards away from each other all morning." Wegman’s talk at Southtowns Walleye March 19 was canceled, but it will be rescheduled in the fall.