Elmwood Pet Supplies is meeting all of its customers outside.

The TreeHouse toy store is handing off purchases to customers at curbside, or having them delivered to homes.

The coronavirus pandemic is testing the resilience of Elmwood Village business owners in ways they never could have imagined. They are adapting to changing circumstances and rules by tweaking how they do business, while wondering what the future holds.

A number of businesses along the normally lively strip have closed for now. Restaurants have to function with takeout service only. The stores that have stayed open say they are grateful for their customers' loyalty.

Before Chili's closed to the public Monday night, business at the Niagara Falls restaurant had been slow for days. Servers had roped off every other booth and eliminated tables to meet new, lower occupancy requirements.

"I was leaving with 20 bucks when I should've been leaving with 220," said Jessica Thompson, a server and bartender at Chili's in Niagara Falls.

Workers removed everything from tables – menus, ketchup, salt – and brought them out only as needed, sanitizing each one before and after every use. Now, per government orders, Chili's and all other restaurants have closed except for takeout. Aside from a few people handling to-go orders, all other wait staff are out of work.

"As tipped employees, it's not check to check, it's day to day," Thompson said. "You have this mentality that you'll spend what you have today and make more tomorrow. Well, there is no tomorrow."

Thompson always claims her tips, so she knows she'll be OK on unemployment – if she can ever get through the state's crashed website to file it. Phone calls to the state Labor Department didn't go through, she said.

"My friends keep saying they're scared," Thompson said. "I'm more mad and broke than I am scared."

[Related: So many people are filing for unemployment, the state's website can't keep up]

The BFLO Store has closed all but one of its five locations. Even there, only 10 shoppers are allowed in at a time.

"I am only keeping Eastern Hills open since I have an outdoor entrance and we can control the amount of people that come in," said Nathan Mroz, the chain's owner.

The Eastern Hills location serves as the BFLO Store's headquarters, used for shipping and online fulfilment. It also added curbside pickup and curbside payment. The store is running limited hours, but may soon join its four sister stores and close temporarily as well.

"Just about no one is out shopping retail stores and for good reason," Mroz said. 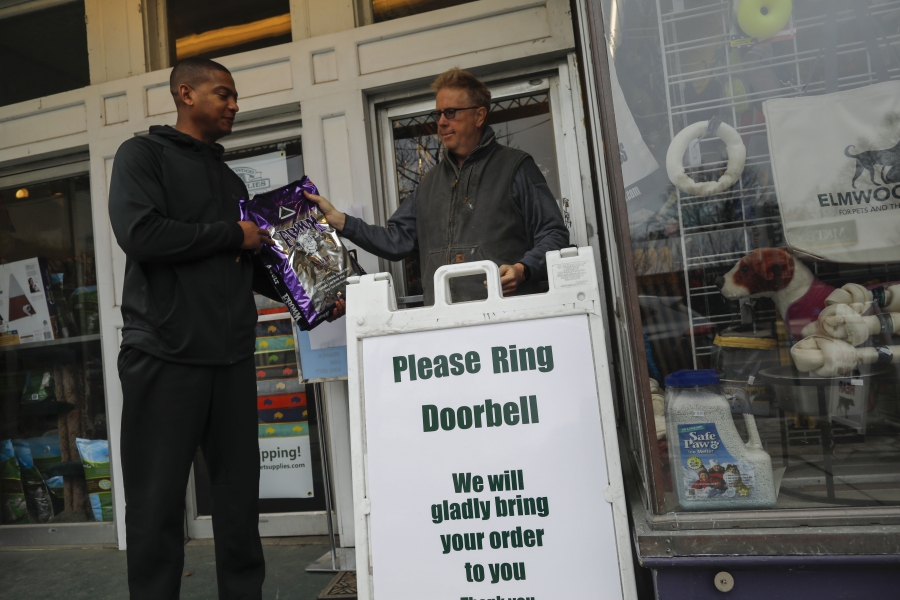 Elmwood Pet Supplies stopped allowing customers inside the store on Monday morning. Employees now fulfill orders out front or in the parking lot behind the building.

"It's surprisingly been busy as usual," said John Higgins, the owner.

The pet supplies store will also make deliveries as needed or bring out orders to the curb. Higgins described his supply chain as "stressed but intact." On Tuesday, employees were unpacking four pallets of products, and more shipments were on the way.

"People have been unbelievably understanding," Higgins said. "It's kind of like a blizzard mentality of everybody locking arms and generously helping. It's oddly uplifting."

At the same time, he feels bad for businesses that are struggling, like restaurants that have restrictions on their operations.

Dealing with a slowdown

Bureau, a men's boutique, is coping with the sudden changes affecting its typical customer base.

"Obviously we have a luxury product, things that most people would wear to go into an office setting," said Jon Eisenberg, a partner in the business. "With more and more businesses shutting down and closing for temporary leaves, it has been a bit slower than normal.

Weddings are another big source of business for Bureau, Eisenberg said.

"With the uncertainty of the next couple of months, I don't know if people will be continuing to get married or put their plans on hold," he said. "Lucky for us, we have a great community around us, great clientele and people that have been supporting us for years, and we hope that will continue into the distant future, regardless of what's going on in the world." 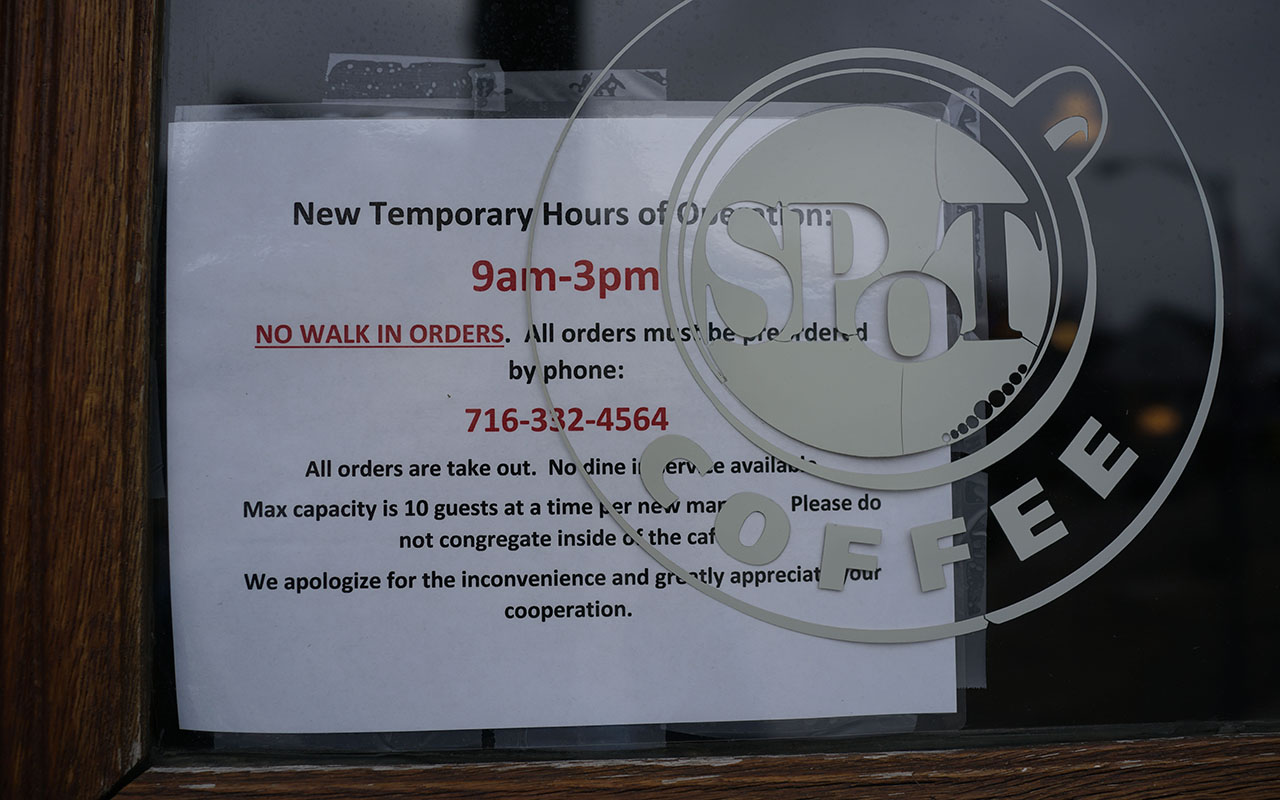 A sign on the front door at Spot Coffee announces that takeout orders may be placed over the phone during reduced business hours, Tuesday, March 17, 2020. (Derek Gee/Buffalo News)

The owners of the TreeHouse toy store, Gaetana and David Schueckler, pride themselves on the personal touch of their business, and guiding customers to just the right toy, puzzle or game.

But they were preparing to shift gears to a "concierge" model starting Wednesday, working with customers over the phone or electronically to help them find the right thing to buy. They're also arranging for curbside pickups and for deliveries to homes.

Customer traffic last weekend was pretty typical, but there was a dropoff on Monday and Tuesday, Gaetana Schueckler said. "If there's any comfort, it's that we're not alone in it."

The store is receiving supportive messages from customers, thanking them for staying open. Gaetana Schueckler said she knows there's still a need for what the TreeHouse provides, even if it's in a different way.

And the Schuecklers are determined to forge ahead with the business they have worked hard to build, at a time when so much retail activity has already migrated online and away from personal contact.

"Amazon is trying to hire 100,000 people," Gaetana Schueckler said. "We're just trying to keep the six that we have."

Michael Mararian dropped by Pet Supplies Plus to buy a bag of dog food. He's a regular customer.

Mararian was out trying to support small businesses during a trying time for them. He was headed next to Tipico Coffee, which recently opened near Forest Avenue, for a cup of coffee.

"That's what I'm trying to do, hit all the little places," Mararian said.