The second was the sounds – or lack of sounds.

Even as the Niagara Frontier Transportation Authority works overtime to clean and reclean its buses and trains, as well as facilities at Buffalo Niagara International Airport, in response to the COVID-19 pandemic, people are staying away. Authority officials say "significant" numbers of commuters have shunned public transportation this week as business, schools and colleges close.

At the airport, NFTA spokeswoman Helen Tederous said passenger levels have plummeted by more than 50%. Most days about 7,000 people pass through the terminal. On Monday there were about 3,300.

Few flights have been canceled, she said, though that situation is also considered fluid.

"I would characterize all these effects as dramatic," she said Tuesday.

"The blessing is that there is more room on the buses," she said, pointing to the desire of most passengers to sit apart from others to help contain the spread of the coronavirus.

Tederous said the NFTA hopes to compile more accurate bus and rail data by week's end, but acknowledges that with so many businesses, governments, schools and colleges shuttered, the situation will change little for the foreseeable future.

Deep inside the Buffalo subway, however, life continued on Tuesday. Many riders on the LaSalle platform wore masks and stood apart from the others. At the far end, Gary Cardamone of the NFTA's rail maintenance crew was manning a whirring floor cleaner after spraying the entire platform with disinfectant.

"It was like a ghost town in here last night, and this is usually a busy station because it has a park and ride lot," he said. 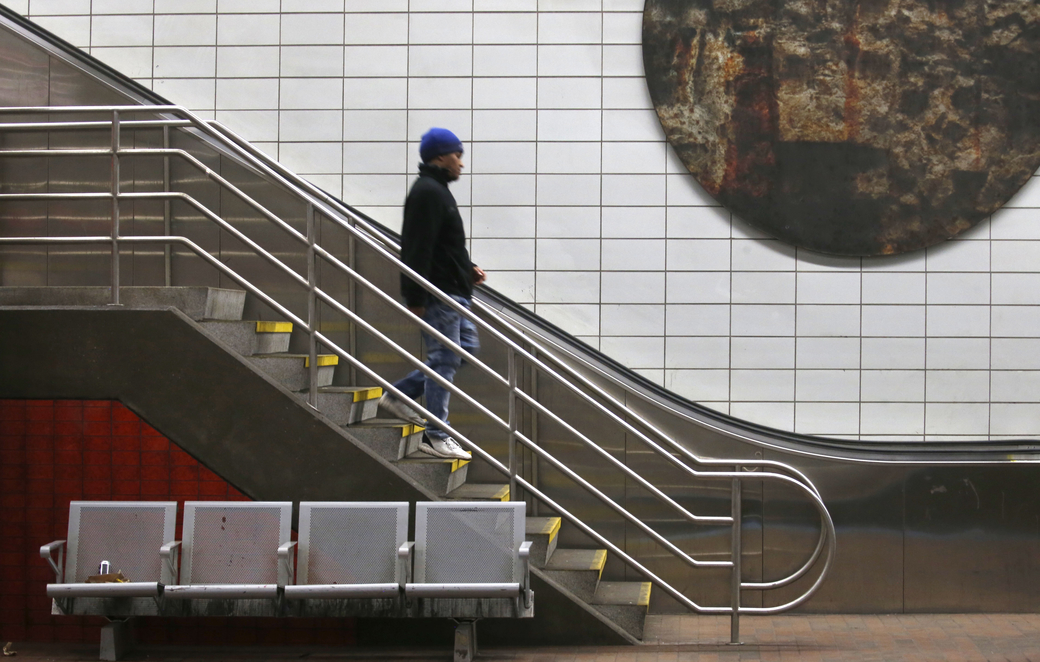 On Tuesday, Cardamone said riders complimented the disinfectant efforts. People want to see it, he said.

"People touch everything, the handrails and the doors, and especially when they bring their kids," the 12-year NFTA veteran said. "But we've had crews down here for three shifts cleaning all the surfaces. We even get the tops of garbage cans."

As an inbound train screeched into LaSalle Station just before noon, Owen Morth was headed to his West Side home after leaving the Lewis J. Bennett School of Innovative Technology. Schools may be closed, but he and other Bennett students had returned to pick up school materials for the long stretch of no classes ahead.

"There's usually a lot more people down here – and lot more noise," Morth said. "I even got here early to avoid all that. But there's none today."

Another Bennett junior, Ayeaye Win, giggled when a reporter suggested she needed no mask because of her traditional Muslim garb – a niqab that left only her eyes uncovered. But she turned serious when describing her just-finished experience at Bennett, where she had also ventured to pick up instructions and supplies.

"People are scared they might get sick; nobody wants to be crowded in with a group of people," she said. "At school today, they would only let three people at a time into the room, and then we had to stay 10 feet apart."

Aboard Car #126 inbound from LaSalle, the crowd at one point swelled to 16 passengers. As the train pulled into Delavan-Canisius College Station, passengers observed another maintenance employee wiping down handrails on the station's escalator.

Ten signs posted by the NFTA throughout the car provided tips about how to protect yourself from COVID-19.

Earlier, the NFTA's Tederous had noted that even without the normal commuting compliment aboard Metro buses and trains, people were still relying on the system. Some continue working. Others who do not own cars use buses and the subway to reach doctors and other services.

On the return trip to LaSalle from Fountain Plaza Station, a woman aboard Car #113 struck up a conversation about her broken foot. She wore a cast covered with a plastic bag, and said she was going to see a doctor.

Another passenger, Dave Vonwryza, volunteered that he had been homeless for months until the local Veterans Affairs office helped him find a new apartment. He said he served in the 101st Airborne in Vietnam, and needed to talk to the VA on Tuesday.

That prompted Michelle Winslow, a custodian at Chudy Paper, to join in the conversation. With her young daughter now off from school, her stepmother took over child care on Tuesday while Winslow attended her regular counseling session downtown.

"A lot of people are in the same situation," she said. "Will it be the city, or the county, or whoever that will help with day care?"

Winslow said she has told her boss she does not know what she's going to do.