One thing we know for sure: schools are closed.

But as questions loom about state assessments, sports seasons, Regents exams and even graduation, there's an ever bigger one: Have students seen their last days in the classroom this year?

"I hope not, I really hope not," Hamburg Superintendent Michael Cornell said.

Schools in Erie County are closed until April 20, which would be the end of the scheduled spring break.

"During that week of break we will be making some decisions, taking stock of where we’re at," said Erie 1 BOCES Superintendent Lynn M. Fusco.

A lot will depend on the number of cases of COVID-19 in the area.

School officials in some states, including Texas, Ohio and Kentucky, have said they are considering remaining closed for the rest of the school year. Dan Domenech, executive director of the American Association of School Administrators, told the Baltimore Sun “it almost seems prudent" to make that decision. 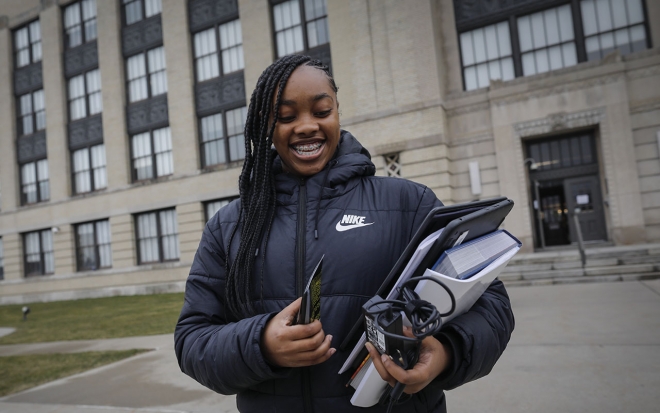 Tenth grade student Kaleah Phillips, 15, carries her school supplies after picking up her work for the next few weeks at the Kensington Frederick Law Olmsted School 156. (Derek Gee/Buffalo News)

The U.S. Centers for Disease Control and Prevention has said that short-term closures are not likely to make a significant difference in the spread of the disease and that closing schools for eight weeks or more might be more effective.

In Buffalo, students at City Honors were told to clear everything out of their lockers, so that the school staff can clean and sanitize them while school is closed. Anything left in the lockers was unlikely to be returned to students, City Honors principal William Kresse wrote in a message to parents.

It was not immediately clear exactly how instruction would be taking place over the next few weeks. Parents were told in an email on Monday that they would be receiving more information from the district on Tuesday.

In Hamburg, students picked up belongings and information from the school Monday. Most schools will be cleaned, disinfected and locked until school resumes. The high school will remain open for parents to pick up meals.

While school is out, teachers have been encouraged to stimulate curiosity in their students, and will be in touch with students daily, Cornell said. He said that work will not be graded. He said students might not remember the geometry work they did during the shutdown, but they will know teachers care about them.

The 29 superintendents in Erie County decided collectively Sunday afternoon that they would close as of Monday, Cornell said. But they had been planning for the shutdown for several days. 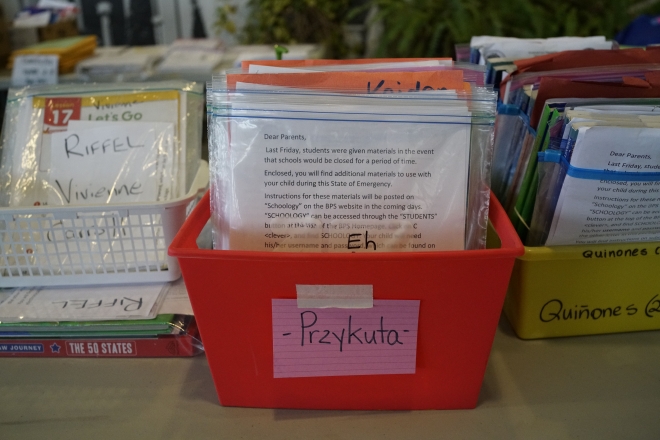 Some teachers were told to prepare several weeks of lessons for students. (Derek Gee/Buffalo News)

"Since school superintendents were advancing the idea of closing since last week, and really expecting it, we had time to put plans into place," Cornell said.

Teachers in the Buffalo Public Schools were told last Friday to prepare three weeks of lessons. Some students don’t have online access at home, officials reminded them, so teachers needed to make hard copies of anything students might need, in addition to uploading them.

In the mad dash for schools to shift instruction online, the focus has been on the core academic subjects, such as math and English. Providing online instruction to younger kids is not as easy to do.

Prekindergarten teachers in Buffalo were told to provide families with a variety of information, almost all of which requires parents to work with their kids: a list of pre-k websites to visit, math and science activities for families, and a Play-Doh recipe and activities.

The state’s English language arts assessment had been scheduled next week. New York State will apply for waivers from the federal Department of Education.

"Districts or schools that experience closures, but are not closed during the entire testing window, should make use of the full testing windows, including the expanded makeup periods, to administer State assessments to all students," the state Education Department said in a statement.

“It looks like they could move the ELA test, depending on how long we’re out,” said Andrew Lyle, the superintendent of the Charter School for Applied Technologies. "It’ll be difficult for kids, particularly if it’s right after we return."

At the Charter School for Applied Technologies, teachers prepared packets of work for students to complete over the next few weeks. Students were told to complete the packets and turn them in when school reopens, according to school spokesperson Lori Allan. Some of the packets were more than 100 pages long.

The hope is that students will complete the packets. The reality, school officials recognize, might be different.

“It would be great if a child were to sit down and walk through that material,” Lyle said. “We’re hoping they’ll do that, but we’ll have to see how it goes.”

Teachers are scrambling to put work together, parents are trying to learn new education apps, and children are wondering when they will see their friends again. When will it end?

"If I had a crystal ball, I could give you a prediction. I'd also play Lotto," Frontier Superintendent Richard Hughes said, adding he has told athletes to keep working out in hopes for a shortened, not canceled, spring season.

He noted that this year's senior class was born into a world that was still recovering from the terrorist attacks of Sept. 11, 2001.

"These kids are battle tested more than others," he said, adding that at the same time, the seniors are losing out of at least four weeks of memories, if not more, of their last year in high school.