On Saturday, David Melgar was busy slinging wings at the new Bar-Bill in Clarence.

By Monday, he and thousands of other service workers across the region were wondering how, and when, they’d get their next paychecks.

Such economic turmoil has swept the country in the wake of the novel coronavirus. Now Western New York is beginning to feel the depths of the economic fallout, particularly since Gov. Andrew M. Cuomo ordered bars, restaurants and gyms to close statewide March 16.

Those establishments employ nearly 60,000 people in the Buffalo metro area, thousands of whom have been abruptly laid off or furloughed. The region supports an additional 76,000 people working in other service positions, from cashiers and bank tellers to babysitters, estheticians and janitors, according to the Bureau of Labor Statistics.

With average annual salaries of roughly $17,000 to $30,000, and little in the way of paid time-off or other benefits, local service workers are now facing down the sorts of personal financial hardships that, multiplied over thousands of households, could spell economic crisis for the region.

“I do have some savings, but a lot of servers don’t have that,” Melgar said. “If this goes four, five, six weeks, I could be in trouble. And other people will be in trouble long before that.”

On March 12, New York State banned public gatherings of more than 500 people, and required gatherings at smaller venues -- including bars and restaurants -- to operate at half their usual capacity. On March 15, after some businesses across the state appeared to flout those rules, Erie County Executive Mark Poloncarz and Buffalo Mayor Byron Brown vowed stricter enforcement measures, and steeper penalties, against violators. 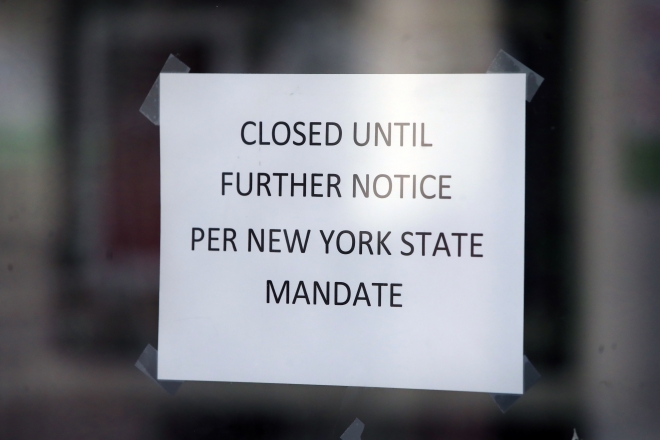 A sign on the door at Brennan's Bowery Bar on March 16. (Harry Scull Jr./Buffalo News)

Food establishments can now offer only takeout and delivery orders; casinos, fitness studios and movie theaters must close. Public health officials have also urged “nonessential businesses,” such as salons and retail stores, to shutter. Many — including a number of national chains, such as Apple, Nike and J. Crew — have already closed, while others have slashed their hours.

The goal of such measures is twofold, officials say: to slow the spread of the novel coronavirus and COVID-19, the disease that it causes, throughout the wider population. Business closures can also protect service industry employees, who often interact face to face with large numbers of people.

“We are exposed to airborne transmission with every possible cough or sneeze from our clients,” said one local aesthetician, speaking on condition of anonymity in order to discuss her work conditions. Her place of business had not closed as of Monday afternoon.

“It’s getting super scary out there,” she added.

Where WNY's coronavirus cases are, county by county
Covid-19 Q&A: Am I safe if I have a good immune system?
Council wants to give public its say during virtual committee meetings
Eastern Niagara is first area hospital to offer drive-up urgent care
Coronavirus outbreak coverage in The Buffalo News

For many workers in the local service industry, however, Monday’s closures have introduced new fears.

Greg Avila-Shah, a line cook at Feature Eatery, learned Monday night he was being furloughed. Most customers there are office workers from M&T Bank, ACV Auctions and a number of downtown law firms, Avila-Shah said, and “when they decided to tell people to work remotely, it eliminated our foot traffic.”

With $800 in bills coming due this month, the 22-year-old said Monday that he was “panicking.”

“The bills don’t stop, but the income does,” he added. “... [I’m] basically watching all my savings drain, hoping for the best.”

Other affected workers have sought to reduce their expenses or find other, last-minute streams of income. Luke Wheeler, a 24-year-old server at a fine-dining restaurant downtown, drafted a letter with his roommate, also a server, to ask their landlord for a break on rent this month. Tara Loucks, who took a part-time job promoting liquor brands in stores and bars to help pay her mortgage, said she would shift her expenses to credit cards, instead.

“I honestly am not sure what comes next, more cut hours or what,” he said.

Downstate, one Brooklyn restaurant worker took to GoFundMe to solicit personal donations. Similar fundraisers have sprung up in Ohio, Connecticut, Illinois, Georgia and Washington, D.C., where hundreds of servers and bartenders are taking “virtual tips” through the Venmo, Paypal and Cash apps.

“I understand this is the right thing to do,” said Wheeler, the fine-dining server, of the restaurant closures. “That being said, I think it’s ... irresponsible to not also have a plan in place for displaced wages and workers.”

In the past week, New York State has announced a slate of policies to protect workers laid off because of coronavirus, including a freeze on utility shut-offs and evictions and faster processing times for unemployment benefits. A national relief package, now making its way through Congress, would give some workers two weeks of paid sick leave, strengthen unemployment benefits and pump more money into food assistance programs.

Stay on top of the developments in Buffalo and Western New York as cases of the novel coronavirus spread throughout the United States.

You will now receive updates on coronavirus developments in Buffalo and WNY.

Art Wheaton, a director at Cornell University’s Worker Institute, described the moves as “small rays of sunshine” in an otherwise grim economic picture. But they’ll do little, he added, to bolster plummeting consumer demand across the economy, or address many companies’ reduced staffing levels.

To do that, a number of economists — as well as Utah Sen. Mitt Romney and House Democratic leadership — have advanced proposals for one-time emergency cash payouts, similar to an initiative underway in Hong Kong that gave roughly $1,300 to all adult citizens. Many local workers said they were rooting for that measure.

"People who work in the service industry want to protect their families, too," said one server at the Texas Roadhouse, who spoke on condition of anonymity in order to discuss her employer.

Nationwide, more than half of all jobs are at “high” or “moderate” risk of disruption, such as layoffs, furloughs or wage cuts, due to the spread of COVID-19, according to Moody's Analytics. Those numbers may be higher in Western New York, where recent job growth has, according to the State Department of Labor, been concentrated in industries such as hospitality and food service.

“This is impacting everybody, in every industry,” Wheaton said, “and these things always hurt the more economically disadvantaged than they hurt the wealthy.”