When New York Gov. Andrew Cuomo decided to close dining rooms for the good of public health, he forced restaurateurs to decide a question that would affect everyone around them.

Try to operate in some form, or close altogether and pick up the pieces in less uncertain times?

Some of the best restaurants on Buffalo will close. Curbside takeout service will be the norm for the rest. Though maybe norm is not the best term on a day when restaurants were canceled mid-flight.

Hospitality, meaning restaurants and hotels, is the second-largest employer sector in Western New York after government itself. Government turned it off, and the communities affected hope it develops a plan to pay for the damage.

“The hardest part is looking my employees in the face, 90 people, and telling them that we don't have a job,” said James Roberts, who sounded close to tears. “I give them the link to the New York State Department of Labor and Employment website. I'm sorry, I'm heartbroken. I love you guys. We gotta go.”

Toutant and Dobutsu, Roberts’ restaurants, are successful by many standards. But like most restaurants, they don’t have built-in reserves to survive. Like certain species of sharks, they keep moving, or they die.

In the current cloud of uncertainty, staying open would expose his staff and his suppliers to the risk of not getting paid, if it turned out that curbside pork belly bao wasn’t enough to keep the lights on at Dobutsu. That was Roberts’ calculus.

How’s this wrinkle: Because he didn’t take checks from his restaurants as they struggled for financial footing, Roberts is himself ineligible for the miniscule amounts unemployment assistance offers.

'You don't know how many people you need'

In Lackawanna, Joe Jerge ran the numbers on his operation, Mulberry Italian Ristorante, and decided to stay open for takeout. For years, Jerge has been paying his core people more than the area average, with some health insurance, too.

“When you walk into a Saturday night, you got 250 reservations, you know what to expect,” Jerge said. “People don’t make reservations for takeout, so you don't know how many people you need in the kitchen.”

There’s a lot of families depending on Jerge and his partners getting this right, and Jerge’s the kind of owner horrified to find his servers crying in fear.

“We're just going to hope and pray, and hope to god we can be effective with it,” Jerge said. “Like I said, just do well enough to keep people working.”

In a time when his lifetime of work is being threatened, “we have heard nothing from the state or the government about, you know, subsidies or anything for these people,” Jerge said. “We're really in the dark. It’s terrible.”

He’s going to see if some of the tipped employees – servers and bartenders – can become delivery drivers. “Hopefully we can do enough takeout business to at least keep the majority of our kitchen staff employed,” Jerge said.

“This morning, I had everybody in here. We’re cleaning the hell out of the place tomorrow. We'll paint. I'm just trying to find things to do.

“Fortunately for us, I put some money away for snow removal, and we didn't need it, so I can use that to keep these guys busy,” Jerge said. “For a week. At the end of the week, I really don't know what to expect.”

Many operators are trying to figure out what to do with the fresh ingredients that have been loaded into their walk-in coolers, at some cost.

The Western New York food bank, called FeedMore WNY, would welcome calls at (716) 852-1305, and they can arrange pickup if you can’t drop off at 91 Holt St. (No doubt other food pantries would, as well.)

In Kenmore, where Mary Ann Giordano had prepared a traditional Sicilian St. Joseph’s Day feast for 500 at Gigi's Cucina Povera, the cancellations have been piling up.

Restaurateurs who happen to have a takeout window installed in their building are trying to figure out if they can reconfigure their business around this architectural amenity.

“We are adjusting schedules, looking at different ways to keep as many people on as we can, but obviously, you know, there's only so much in the well,” Pizza Plant’s Bob Syracuse said. “Can takeout go from 15% of our business to 85%?" 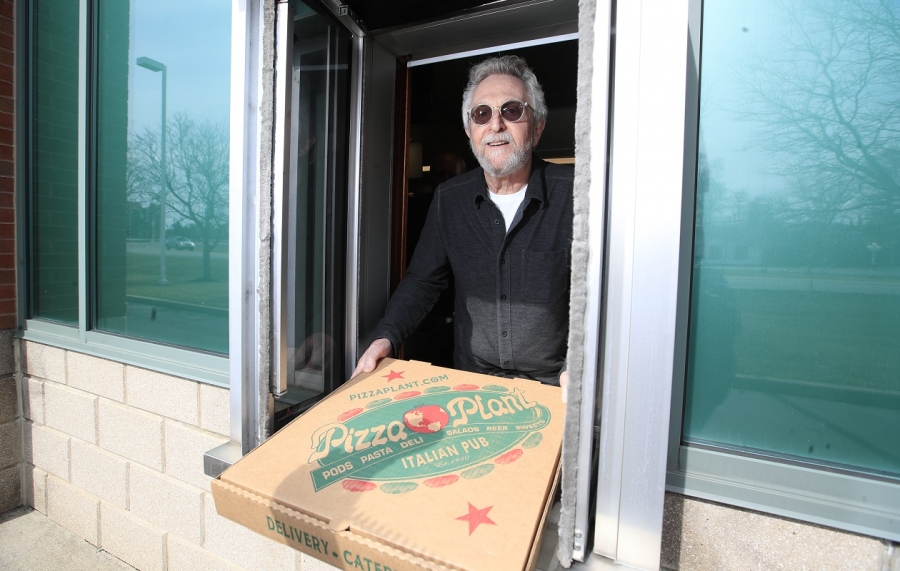 At Pizza Plant's Transit Road location, the drive-through "Pod Port" is going to get a workout.

Since it’s already a pizza restaurant, “We are kind of like that already,” Syracuse said. “Since we do have a pickup window at the Transit location, we were thinking of even maybe extending hours into the morning and maybe offering some breakfast,” he said. “We have the staff to do that.”

In the end, the goal is to reconfigure the business so it can support key staff who the company wants to keep around. Because restaurants are made of people.