The coronavirus outbreak has sent New York's manufacturers into a tailspin.

And now we have numbers to back it up.

A new report by the Federal Reserve Bank of New York released Monday showed that business activity among the state's manufacturers plummeted to its lowest level since 2009 – during the Great Recession.

The New York Fed's index of business activity had its biggest drop in March since it started doing the survey in 2001. And there was little optimism that things would get better anytime soon.

"Firms no longer expect general business conditions to be better over the next six months," the Fed said.

The report is important on two levels. First, it is timely. It is the first economic report that is based on data that was collected during the first 10 days of March – after the coronavirus outbreak began sweeping across the country and causing uncertainty among businesses.

And second, the report is focused only on New York. The Fed does its monthly survey based on data collected from a survey of New York businesses, including some in the Buffalo Niagara region.

The results illustrated how swiftly the economy has turned. The drop in business activity from February to March was the biggest one-month drop since the survey began more than 18 years ago. In February, the Fed report showed business activity strengthening to its highest level since May 2019. 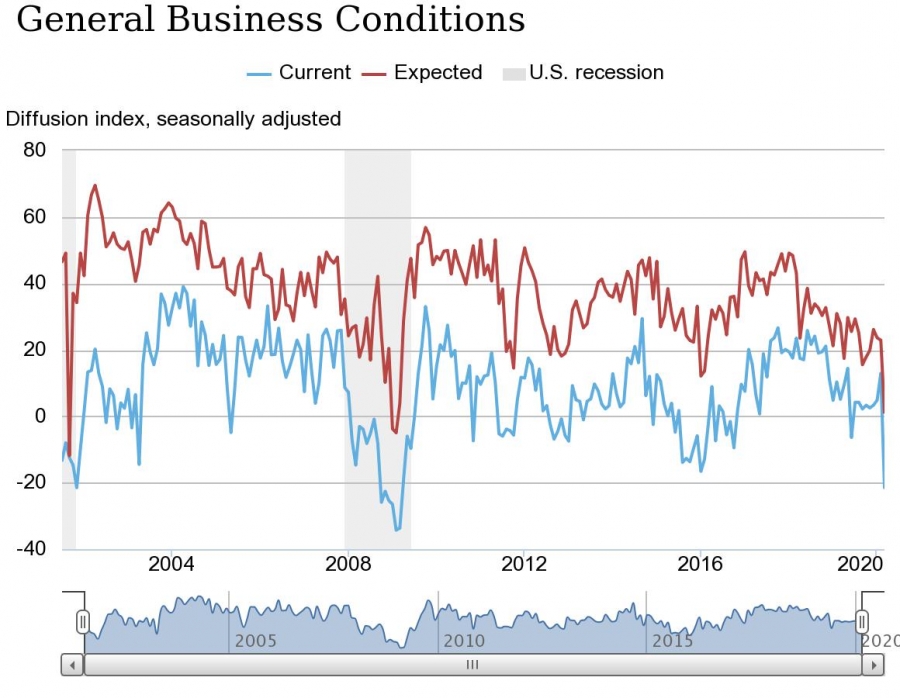 “Employment leveled off, and the average workweek declined. Input price increases were little changed, while selling prices increased at a slower pace than last month. Optimism about the six-month outlook fell sharply, with firms less optimistic than they have been since 2009,” the March report said.

Covid-19 rollback in EPA air, water rules will cause deaths, critics say
Small business financial help: What's available?
Can I pay the rent? Tenants struggle, landlords worry as the rent comes due
We asked, you answered: What do you think of 'bored shopping'?
After soaring for years, Buffalo's housing market comes to screeching halt

The report was based on responses to a survey that were collected between March 2 and March 10. While concerns about the coronavirus outbreak were growing rapidly during that time, the impact has greatly increased since then, with schools closing, large gatherings banned and normal workplace operations being widely disrupted.

The survey shows how the coronavirus outbreak has businesses hunkering down. A measure that looks at general business conditions had its biggest point drop on record and fell to its lowest level since 2009, with 42% of the executives responding to the survey saying that conditions had worsened over the past month – double the number reporting an improvement.

Optimism about the near-term future also tumbled to its lowest level since 2009.

But there also were hopeful signs in the survey. Indexes that measure new orders and future shipments declined during March, but they also remained positive, indicating that there still is activity with the business supply chain and that those firms still expect orders and shipments to rise down the road.

But those same firms also are being cautious. They're cutting back on capital spending and investments in technology. Employment leveled off, but the average work week got shorter. Inventories are rising a bit and delivery times are getting slightly longer.