Now begins the job of making sure kids are still being fed.

Across the region, school districts – shut down for at least a month amid concerns of spreading the new coronavirus – will roll out grab-and-go meals starting Tuesday to ensure that those students who rely on school lunches and breakfasts are still getting them.

That was a huge concern about closing schools for any extended period of time, particularly in a large, poor district like Buffalo, where 83% of the students are considered economically disadvantaged.

The Buffalo Public Schools, where all students receive a free lunch, will have 28 designated schools around the city where families can grab a lunch for their child, along with a continental-style breakfast for the following morning.

Those can be picked up from 11 a.m. to 1 p.m. Monday through Friday until schools are back in session.

“They are not going to be eating on site, but any student can go to any one of those sites,” said James Weimer, chief operating officer for the Buffalo Public Schools.

“We wanted to make sure that we saturated the city so that these sites are easily accessible for everyone,” Weimer said. "We’re going to be flexible in opening another site or two, if we have to.”

[Related: Where meals will be available for Buffalo Public Schools students]

It's a big task that started Monday with some 30 food service workers hard at work readying meals at the school district's commissary on East Delavan Avenue.

"The majority of our community really needs this meal," said Bridget O'Brien Wood, director of child nutrition services for the Buffalo district. "That's why we're doing it."

Tuesday's lunch will be a bit of a "chef's choice."

Lynn Fusco, superintendent of Erie 1 BOCES, said that each district in Erie County is making plans to distribute breakfast and lunch in a way that makes sense for that district, with some delivering meals and others having meals available for pickup at the schools.

"We’re very proud we were able to pull that off in a timely fashion to make sure that kids were not food-insecure during this period of time,” Fusco said. 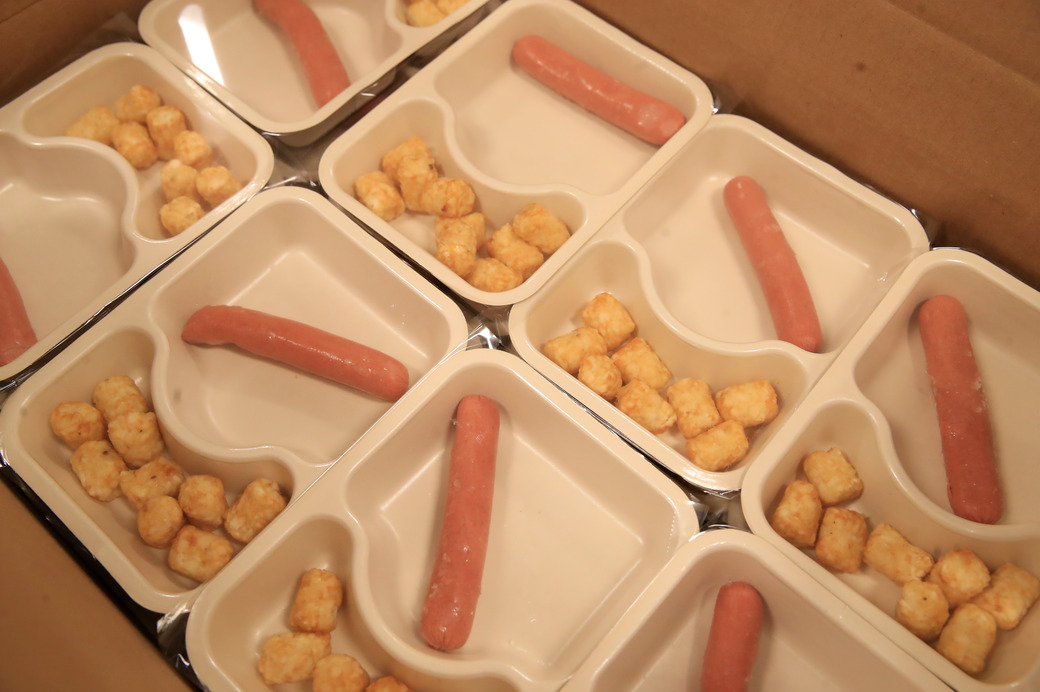 In Hamburg, Superintendent Michael Cornell said the district will bring in its cafeteria workers on Mondays and Wednesdays to prepare meals for those students who qualify for free and reduced lunches.

Parents will be able to pick up meals for several days on Monday and Wednesday evenings.

“We’ve never done anything that looks like feeding 800 students on a grab-and-go basis,” Cornell said. “What won’t change is that we’re going to feed those kids.”

In Lancaster, the district will provide meals that can be picked up from 10 a.m. to noon Mondays through Fridays at the middle school, 148 Aurora St., Superintendent Michael J. Vallely said in a letter to parents.

A bag containing lunch for the day and breakfast for the next day will be provided at no cost to students – regardless of whether they are eligible for a free or reduced lunch or not.

"We encourage families to continue to be proactive in reducing risk of COVID-19 by not congregating at the school site once meals have been distributed," Vallely wrote.

In Lake Shore, lunch and breakfast can be picked up between 9 a.m. and 11 a.m. at the middle school on Erie Road for students, regardless of whether they qualify for a free lunch or not, said Superintendent Charles Galluzzo.

“The first couple days will be hit or miss in terms of how many to get ready,” Galluzzo said. “I think we'll have 400 meals ready to go.”

At the Charter School for Applied Technologies, parents will be able to pick up breakfast and lunch at the middle school on Shoshone Street and at the elementary school on Kenmore Avenue, which will also be distributing meals for high school students.

The school will provide meals for all children in a family, even if some of the students attend other schools, according to spokesperson Lori Allan.

And in Niagara Falls, food service employees were in all day Monday preparing for the first pickup on Tuesday at any one of the district's 11 schools.

"We're going to start Tuesday and the message is, 'You go to your closest school between 11 a.m. and 1 p.m. and you can pick up a bag that will have the day's lunch and tomorrow's breakfast,' " said Mark Laurrie, superintendent of the Niagara Falls City School District.

"We'll start that way and see what the numbers look like and then add further outposts if it becomes hard for people to get there," Laurrie said. "What we don't want is huge crowds of people waiting for their food."

The superintendent said he still hasn't made a decision about whether the district will provide meals during what would have been Easter break.

"Normally we wouldn't," Laurrie said. "But these aren't normal times."

Where meals will be available for Buffalo Public Schools students