Eric Spina was 9 when the Buffalo Braves played their first NBA game, in 1970. They beat the Cleveland Cavaliers, 107-92, at Memorial Auditorium. Their leading scorer, with 24 points, was Don May.

Spina, who grew up in Buffalo’s University District, loved May and those original Braves but didn’t know a thing about May’s alma mater, the University of Dayton.

Today, though, Spina is Dayton’s president — and this season the Flyers had their best men’s basketball team since May played for them. They would have been a No. 1 seed in the NCAA tournament for the first time, with a good chance of playing in the Final Four for a second time.

But the men’s and women’s NCAA tournaments were canceled by the coronavirus, and the Flyers’ feel-good season ended in feel-bad fashion. They finished No. 3 in the nation in the Associated Press and USA Today polls, behind only Kansas and Gonzaga.

“You think about these kids,” Spina says, “and it’s heartbreaking.”

He means Dayton’s women’s team, too. The Flyers had already secured an automatic bid to the women’s NCAA tournament by winning the Atlantic 10 tournament. Oh, and they’re coached by Shauna Green, who happens to be the leading scorer in the history of the Canisius College women’s program.

“Young kids, we try to protect them from this kind of pain and suffering,” Spina says. “But life sometimes gets in the way.”

Dayton is a Catholic college founded by the Society of Mary in 1850.

“The first thing that the Marianists talked about in terms of their charism is community,” Spina says. “And what we’ve seen from both of these teams this year is close community on the teams themselves and in the broader community supporting them.”

Spina grew up on Windermere Boulevard, near the University at Buffalo’s Main Street campus. His father was a middle-school principal in Lancaster, and his mother a substitute art teacher while raising her family.

“My parents were solidly middle class,” Spina says. “They had a sense Canisius High School would be a good place for me, and they sacrificed to send me there.”

“Buffalo, what a city to grow up in,” Spina says. “It’s ethnically rich. It’s a place where the wealthy, the poor, and the middle class could all be in the same place, whether it was the Broadway Market or a restaurant on the West Side or the Allentown Art Festival — just a lot of mixing at the time that opened my eyes to the value of diversity, which has certainly been a part of my leadership here at the University of Dayton and elsewhere.”

Elsewhere includes Syracuse University, where he spent 28 years — first on the faculty, then as dean of the College of Engineering and Computer Science, and then as vice chancellor and provost before serving as interim chancellor and president.

As it happens, the Flyers played in Buffalo in the 2014 NCAA tournament, where they upset Ohio State in the first round and Syracuse in the second. “Dayton didn’t mean anything to me at the time,” Spina says, “other than the pesky team that beat us.”

Dayton means everything to him now. He was installed as president on July 1, 2016, but had already been named to the job when Dayton and Syracuse played in the NCAA tournament in St. Louis a few months earlier.

In terms of rooting interest, he says, “I immediately chose my future employer rather than who was employing me at the time.” But this time Syracuse won. “So from my perspective, I’ve been on the wrong side of this match-up twice.”

We checked the bios of two dozen other college presidents who are active on Twitter and couldn’t find others who cited their high schools. “Those four years were transformative for me,” Spina says. “They opened my eyes to the world. It put me on a trajectory that has enabled me to get to this point. And I made great friends who helped me grow in so many ways.”

Those friends include Tom Perez, a classmate, who now is chair of the Democratic National Committee. Several of Spina’s other high school pals attended his installation as president. “Those are just deep and important bonds,” he says. 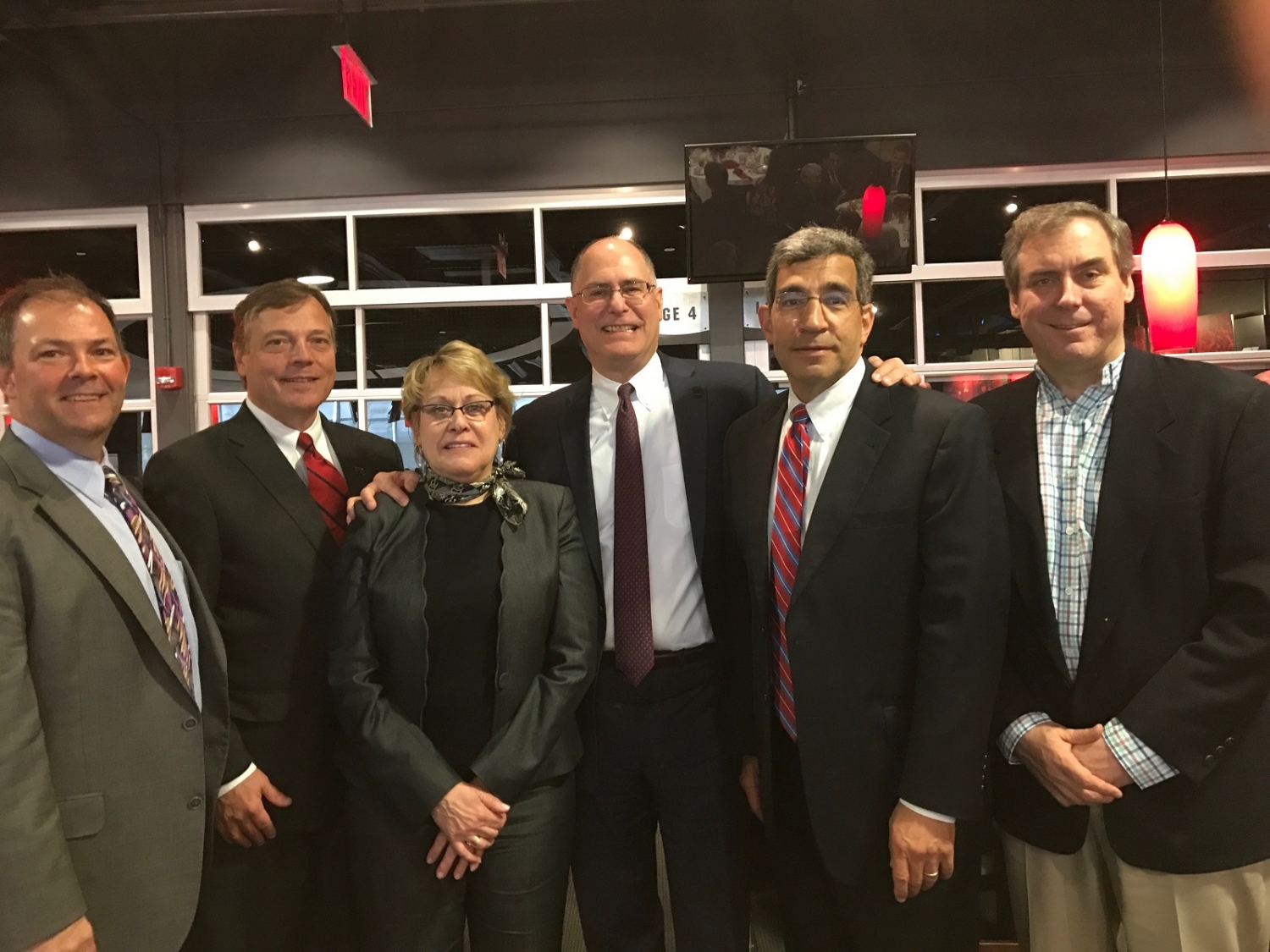 “I remember May playing for the Braves so well,” Spina says. “I think he wore No. 22. If that’s right, I deserve points for that. If it’s wrong, I’ll deny ever having said it.”

“They remember him fondly in Dayton,” Spina says. “People here still talk about his sweet shot.”

A half-century from now they’ll surely remember Obi Toppin, this season’s top star. And they’ll remember these high-flying Flyers, who were ready to soar until a pandemic stole their season.