Toilet paper is not the only thing people are hoarding because of the novel coronavirus pandemic.

Ken Booth, a gun owner, said he was stocking up on ammunition for his rifle and his girlfriend's new handgun Monday because he fears if there are widespread closings of stores selling essentials, such as food, it could create social and economic turmoil and result in lawlessness.

“People haven’t stood in soup lines in this country since the Great Depression,” said Booth, standing outside the Cabela’s sporting goods store in Cheektowaga, where he had just bought  ammunition.

“What happens in a month from now when people start coming for what I have?” Booth said.

Checks by The Buffalo News at the Cabela’s and nearby Walmart in Cheektowaga revealed empty or nearly empty shelves in the ammunition sections. Among the items sold out at Cabela’s was 9 mm bullets for handguns and shotgun shells, though birdshot was still available, according to several customers.

Media outlets across the country, from Atlanta to Idaho to Los Angeles, are also reporting surges in the purchases of firearms and ammunition prompted by fears related to COVID-19.

Kyle Pikuzinski said he stopped by the Cabela’s in Cheektowaga and bought ammunition for his rifle because of the unknown factor in how the coronavirus will impact society.

“I guess you can call it hysteria. They are shutting down everything. What’s next?” Pikuzinski said, adding that he is by no means going off the deep end himself with worry. “I’m really not one of those guys, but you never know. I’ve heard it said that civilization is a very thin shell.” 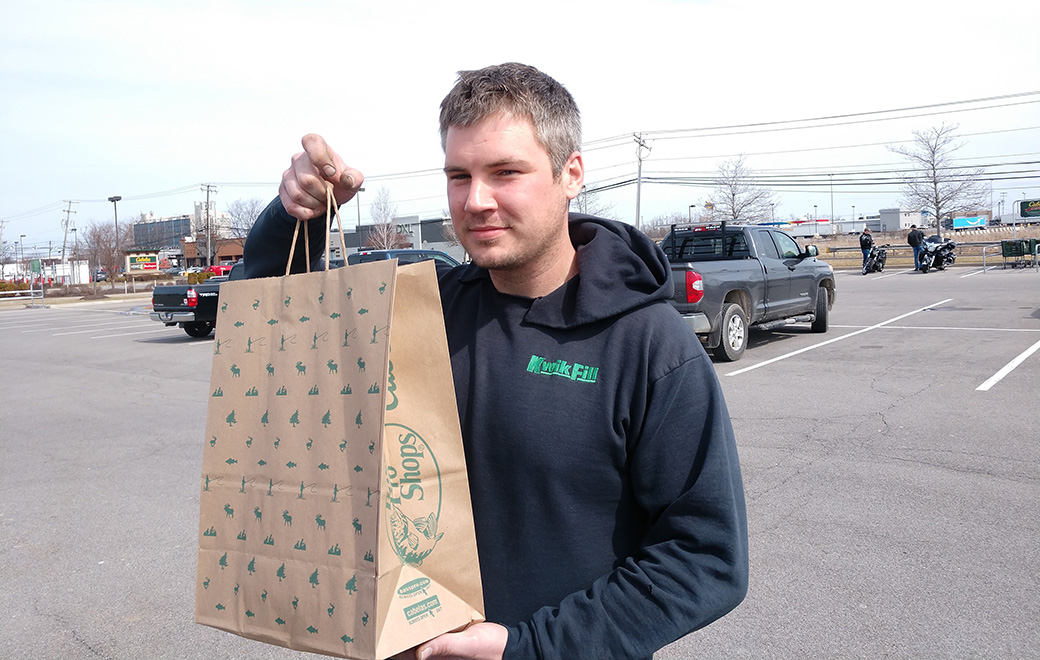 Kyle Pikuzinski holds a bag with boxes of ammunition he purchased for his rifle outside the Cabela’s sporting goods store in Cheektowaga on Monday, March 16, 2020. He said he went shopping for extra ammo because of the COVID-19 outbreak. (Lou Michel/Buffalo News)

Ken Sanger, who stopped in at the Walmart for shotgun shells, said he hopes the panic gripping some over the coronavirus would turn out to be unwarranted.

“The inventory here is low,” Sanger said looking at partially empty shelves. “If I’d known this was going to happen, I would have bought shells before this. Everyone is getting a little nervous, but probably this will be no big deal.”

Bob Foss, an East Aurora resident, said he purchased ammunition at Cabela's “just in case.” He explained that fear is at the bottom of what is happening.

“People are more scared of other people and how they are going to react, especially after the toilet paper thing,” Foss said.

But not everyone was buying ammunition for protection should social order collapse. Some gun owners said they wanted to have ammunition on hand to hunt for food, if grocery stores close.

Will Maybee said he purchased fishing gear because he lives near the Allegany River and wants to be prepared for whatever might happen.

“I went to the supermarket this past weekend and fish and meat were very sparse,” Maybee said. “I want to be able to provide for my family and fish are plentiful in the river.”

COVID-19 has already hit close to home for Booth. He pointed to his girlfriend, Brandi Gillette, seated in the passenger seat of his pickup truck and told of how she has been economically hurt by the virus.

“My girlfriend is a waitress and she has lost her job. She has two kids at home. What happens when the rent comes due?” Booth said.

Another Cabela's customer who declined to give his name said he bought ammunition, but poked fun at himself and others.

“It will be interesting to see what the return lines are like when it’s all over,” he said.

A manager at the Cabela’s declined to comment and referred a reporter to its corporate offices, which did not respond. Attempts to reach Walmart corporate headquarters for a comment was also not successful.