The bars are full, but the shelves are empty. Schools are closing, but workplaces are not.

It turns out there’s little coherence to life under the threat of coronavirus.

And yet, even as local governments, businesses and school districts took decisive action to prepare for the virus over the past week, many Western New Yorkers appear unsure how to best react to a pandemic that has, in the span of a few short days, swept into every crevice of daily existence – from the pens available at the DMV to the sporting events on television.

Some are stockpiling toilet paper or bracing for layoffs. Others have snapped up cheap flights and packed bars or gyms where big-screen TVs blare the latest coronavirus news.

New York State late Saturday had 613 confirmed cases. By evening, officials had reported two deaths downstate. Nationwide, the number of confirmed coronavirus cases was 1,629 on Saturday, one day after President Trump declared a national emergency and was himself tested for the disease.

“There are a lot of what-ifs in the air right now,” summed up Richard Hughes, the superintendent at Frontier Central School District. “We’ll just have to figure those out pretty quickly, as we come to them.” 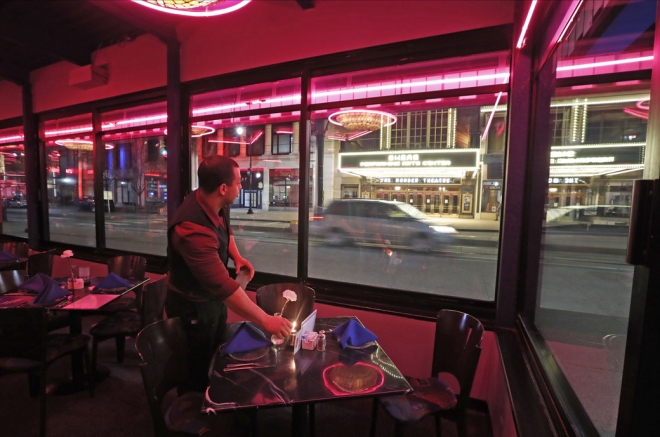 Bijou Grille waiter Mike Renier kills the time by cleaning and setting a table in the dining room. The restaurant across from Shea's Performing Arts Center would normally be swamped with "Hello Dolly!" theatergoers, but since the show's run was canceled due to the COVID-19 scare, the business lost over 600 dinner reservations. (Robert Kirkham/Buffalo News)

In Western New York and across the country, the what-ifs have grown more concrete by the day.

On March 11, amidst calls for more aggressive “social distancing” measures to slow the spread of the novel virus, Gov. Andrew Cuomo announced that all state schools would begin teaching classes online. One day later, the state banned large public gatherings, suspended nursing home visitation, and mandated that restaurants, bars and other crowded places fill only to half capacity.

“It feels so abrupt,” said Daniel Garcia, a senior communications major at SUNY Buffalo State. “I don’t know if I’m ever going to see some of these people again. … It was an eerie feeling. I wasn’t prepared for that.”

Like other locals, Garcia now finds himself confronting a baffling patchwork of virus decisions. Can he still work out at the gym now that school is closed? Is it safe to swarm the bars, since they’re still open? To both these questions, he had answered “yes” – at least until a confirmed local case was found. (As of Thursday, the Erie County Department of Health recommended that people “seriously consider avoiding attending any event or location with 50 or more” people in attendance.) 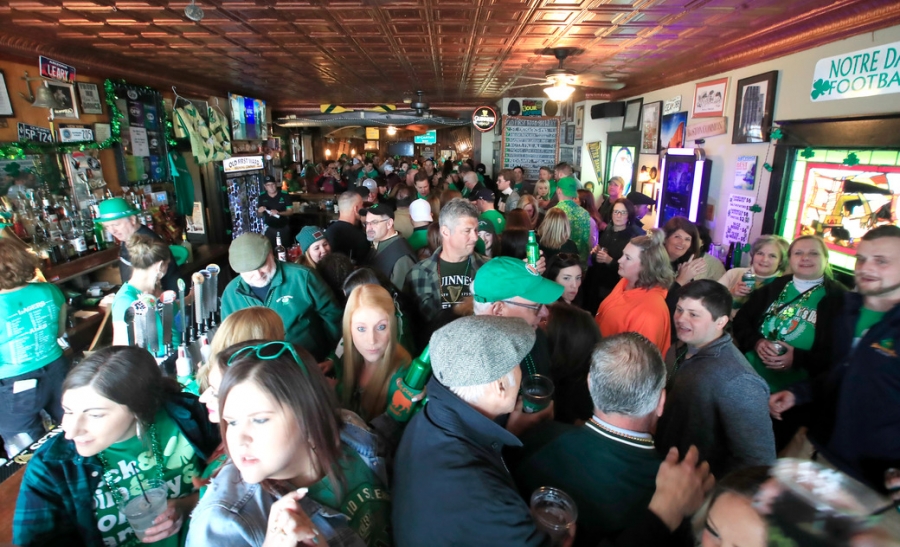 A packed Gene McCarthy's after a small parade down Hamburg Street in Buffalo on Saturday, despite the cancellation of the Old First Ward St. Patrick's Day Parade. (Harry Scull Jr./Buffalo News)

But other questions defy such clear thresholds, such as: How much risk can you bear if your job requires you interact with large numbers of people? Or: How much money should you save in the event that your workplace closes?

For Brittany Buckley, a preschool teacher’s aide at the Genesee County YMCA, that has become a preoccupation. On Wednesday, Buckley tweeted that she hoped she contracted COVID-19 because she wouldn’t be able to pay her bills if she were put on leave because of it.

Anticipating a surge in that sort of need among other retail and service workers, the Food Bank of Western New York has begun ramping up production of emergency food kits, said Catherine Shick, a spokesperson. The food bank also finds itself in acute need of volunteers, since many of its regulars are social-distancing to slow the virus.

“There’s nothing I can really do except hope and pray that they don’t close the schools,” Buckley told The News. “I’m trying to be a bit more conservative with my money and be prepared, but because I don’t make much anyway working for a non-profit, it’s a bit hard.”

Harder still, for many local businesses and individuals alike, is just how quickly the coronavirus came to overtake almost every aspect of public life. Reminders of the pandemic are ubiquitous and manifold: Spot Coffee won’t fill travel mugs; Barre Centric won’t fill classes.

Gather & Game, on the West Side, is “quarantining” board games for 24 hours after each use, while bars and restaurants across the region have committed to new cleaning, dish-washing and sanitizing practices. On Facebook, posters in Buffalo neighborhood groups have encouraged residents to support local retailers, check in on elderly neighbors, and consider donations to groups like the Food Bank, which may soon need more of them.

But nowhere are the region’s COVID-19 preparations more visible than at its grocery and big box stores, where lines now snake around corners as early as 6 a.m., and customers emerge with mounded carts of frozen pizza, dried pasta and – always, always – toilet paper. 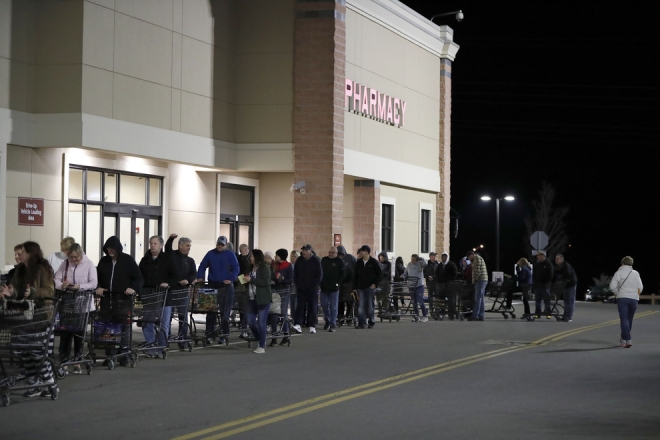 Once the doors opened at 6 a.m., everyone in line followed a routine: take cart, sanitize your hands, enter the store, buy whatever you could.
(Mark Mulville/Buffalo News)

The run on toilet paper grew so severe last week that Wegmans, Tops and Walmart all placed limits on how many rolls shoppers can buy in one trip. On Friday afternoon, a trio of Walmart employees at the superstore on Walden Avenue tore into flats of TP in the middle of a crowded aisle, the shredded cardboard piling up in little hills around them.

At the Wegmans on Amherst Street, which opened Friday at 6 a.m, toilet paper sold out by 8:30 a.m., one employee said.

“In all the time I’ve worked here, I’ve never seen anything like it,” said Carlton Jones, who has worked at the Dollar Tree on Broadway Avenue since 2016. While that store still had toilet paper, Jones had to tell multiple customers they cannot buy the hand sanitizer put out for employees.

Delivery services have also reported sudden surges in business, as many customers – especially the elderly, who are most at risk from COVID-19 – choose to spend more time at home. A spokesman for Instacart, the national grocery-delivery app that partners with Wegmans, Tops, Aldi and several other stores, said the platform’s statewide sales growth last week was 20 times higher than in the same period the month before.

Takeout Taxi, a local service that delivers both consumer goods and meals from restaurants, also saw a 25% increase in new users last week, said Vincent Lesh, the company’s owner. About half of Takeout Taxi’s customers are seniors.

Local retailers who have not delivered – including Paradise Wines, East Aurora Brewworks and Park Edge Sweet Shoppe – have also made plans to begin doing so. Dapper Goose and Waxlight Bar a Vin both announced Friday they would begin accepting takeout orders.

And yet, even as much of the region tenses for the arrival of COVID-19, many public spaces seem untouched. The largest downtown employers have not yet enacted widespread remote-work policies, and as of Friday, lunch spots like the Expo Market reported only modest dips in business.

The Walden Galleria was quiet on Friday afternoon, but no more quiet than usual, two store managers said. St. Patrick’s Day revelers still gathered in the Old First Ward on Saturday despite the parade's cancellation, some carrying a poster board that read “coronavirus can kiss my Irish-ass.”

Perhaps most surprisingly, in light of national reports about cratering airline demand, customer service employees for multiple airlines at the Buffalo Niagara International Airport said they hadn’t noticed much impact yet. In a statement on its website, the Niagara Frontier Transportation Authority, which oversees the airport, said only that it would “continue to closely monitor” the spread of the virus. 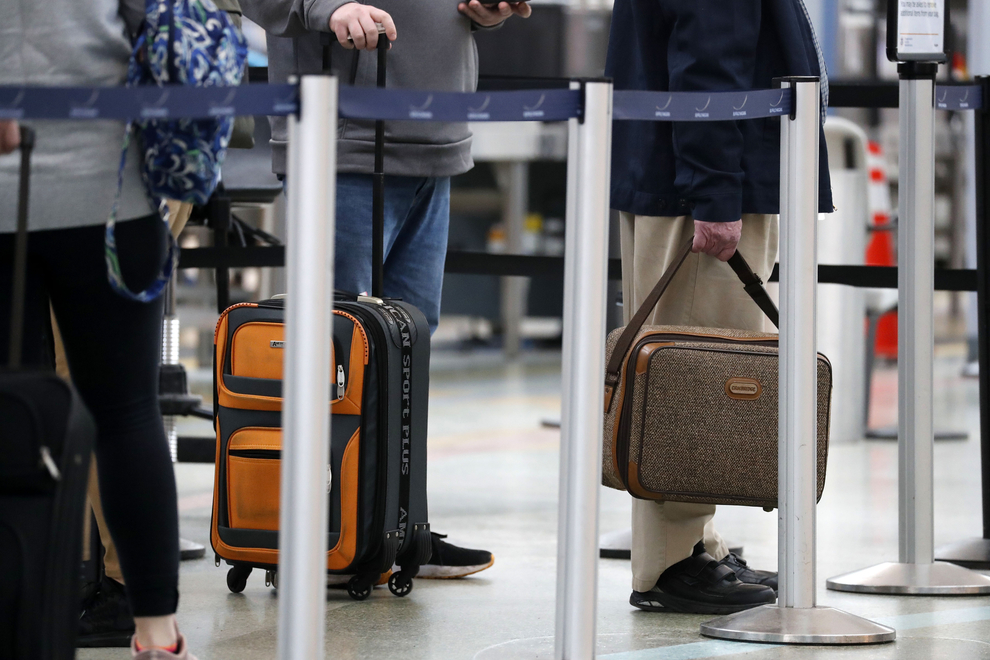 “No one really seems that concerned,” said Xavier Sellers, a duty manager for United Airlines. After a beat, he reconsidered: There have been a number of passengers wearing face masks, he added – and one very memorable customer bound for Newark on Wednesday in a full hazmat suit.

That spectrum of COVID-19 mindfulness was on display at the baggage claim Friday, where travelers from Charlotte, N.C., reunited with family and waited for their bags. One group hugged and kissed and coughed and fussed over small children who’d been playing on the floor. Another traveler swabbed her phone discretely with disinfectant.

Then there was Journee Pennick, a junior at Medaille College, who rigged a headscarf over her nose and mouth between precautionary pumps of hand sanitizer. She hadn’t even wanted to take the flight, she said, but spent spring break in New Orleans and had to get back to Buffalo.

In the boarding line, a man near her had called the Health Department with questions about coronavirus, she said. Pennick was relieved both to get off the flight and to learn that Medaille had canceled in-person classes.

“Coronavirus wasn’t even a thing when we planned this trip,” she said. “But then, I don't – it just exploded.”