It wasn't quite the hooley they are used to, but the St. Patrick's Day parties did go on Saturday in the Old First Ward, despite the cancellation of the official parade to limit possible exposure to COVID-19.

Irish flags flew from South Park to Elk, Hamburg and South streets. And on Hamburg Street, they were wearin' the green and raising the glasses - social distancing be darned.

"The parade has been a fixture for this neighborhood, it's such a jewel. Everyone celebrates," said Mike "Mooch" Cullen.

He and his wife, Donna have a party on parade day every year, and they did Saturday, too. It just wasn't as large as other years.

"We normally have 150 to 180 people," Cullen said, adding he expected about 100 fewer friends and family.

But there was plenty to drink and eat - hot dogs on the grill, and potluck side dishes warming in crock pots on a table in the driveway. 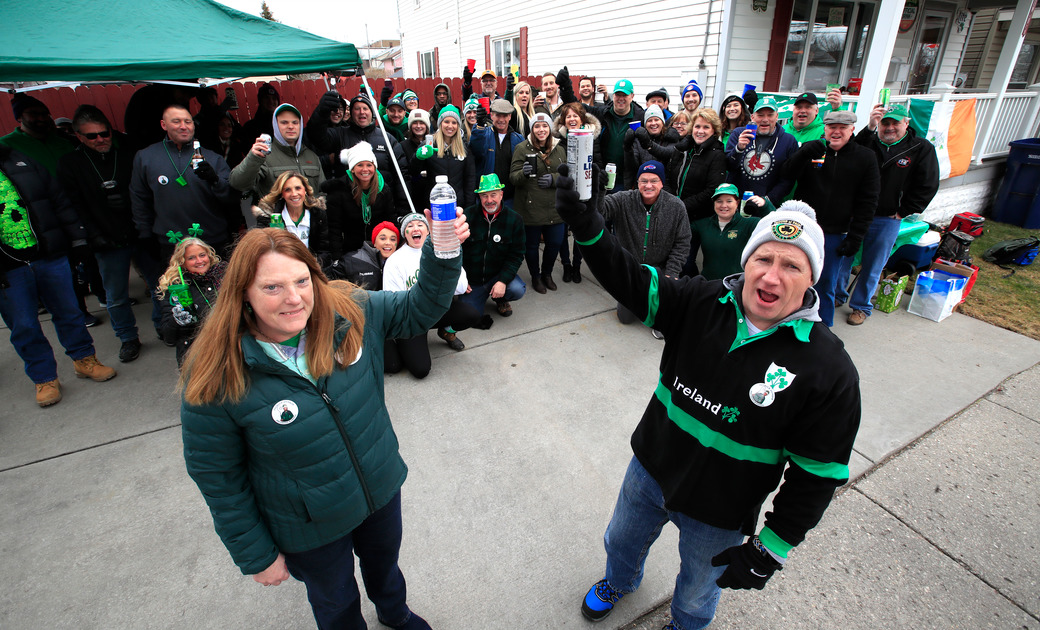 Donna and Mike Cullen celebrate with friends along Hamburg Street, despite the cancellation of the Old First Ward St. Patrick's Day Parade due to the COVID-19 on Saturday. (Harry Scull Jr./Buffalo News)

And they were rewarded with an unofficial mini-parade of several floats driving down Hamburg street, including one pulled by a pickup truck with a driver wearing a surgical mask, as a nod to the viral pandemic that forced the cancellation of the "Old Neighborhood" St. Patrick's Day Parade.

"We're here for a great time," said Kevin Sprow of the Town of Tonawanda. "That's the reason we are here, to forget about it."

Jill and Doug Cloud usually bring her mother to the parade, "but of course this year, we couldn't do that," she said.

But it was important to come out for the biggest week of the year in the Ward, kicked off by the Shamrock Run, then the parade and house parties.

"Obviously, it's very dampened, but I think people are trying to make the most of it, doing what they can and trying to be cautious and safe," said Jill Cloud of Lackawanna. "We wait every year for this weekend and this holiday."

"We still have all the house parties, there's just not a big parade," added her husband, Doug.

"Who wants to be home watching TV? You can't watch anything without something coming on about it," Jill Cloud said of the worldwide virus outbreak. "We need a break for a minute."

Several folks celebrating along Hamburg Street said they were not concerned about the new coronavirus because there had not been a confirmed case in Erie County.

Down the street, you wouldn't know anything had been canceled inside Gene McCarthy's tavern, where it was shoulder-to-shoulder Saturday afternoon.

"Coronavirus can cancel the parade, that won't stop us from coming down," said Kevin Durawa of Williamsville, standing outside the tavern chatting with his brothers and brother-in-law.

"You start here and you finish on Dyngus Day," Durawa said.

"I'm really disappointed, I don't think it was necessary. I think we would have been OK," added his nephew, Matt Durawa of Buffalo. "I think it's a dramatic overreaction and I think the flu has done much worse than the coronavirus."

Wannabe parade revelers can start planning for the rescheduled parade on Sept. 19, just about six months away from St. Patrick's Day.

They will not be denied in the Old First Ward. Less than five minutes long, some hardy St. Patrick's Day fans keep up the parade tradition. pic.twitter.com/6lW5YMBHEc