Niagara County prosecutors told a Niagara County Court jury Thursday that Joseph H. Belstadt's variety of statements in the days after Mandy Steingasser's disappearance implicated him in the killing of the 17-year-old more than a quarter-century ago.

"We will prove to you this defendant, Joseph Belstadt, is guilty of the murder," Assistant District Attorney Mary Jean Bowman said during her opening statement in what is expected to be a six-week murder trial.

"There will be a wall of evidence," Bowman's colleague, John P. Granchelli, promised the jury during the prosecution's 37-minute tag-team opening statement.

But defense attorney Michele G. Bergevin said the prosecutors' case has many gaps, such as DNA evidence that she said points to Steingasser's ex-boyfriend, not to Belstadt.

"The government will not be able to prove beyond a reasonable doubt that Joseph Belstadt ever laid a hand on Mandy Steingasser, let alone intentionally murdered her," Bergevin said.

Part of the evidence, Granchelli said, will be three fibers from the back seat of Belstadt's car, found on Steingasser's body, and two pubic hairs matched to the victim by DNA testing, along with Belstadt's sperm.

"The defendant, Joseph Belstadt, flew into a violent rage when Mandy Steingasser rejected him," said Bowman, who said the evidence will show that Belstadt fractured her skull and strangled her with her own bra.

The prosecutors also cited bleeding in her brain, her broken fingernail, her missing shoes and all of the broken hooks on her bra.

"Mandy Steingasser had been in a fight for her life. She lost," Granchelli said.

But Bergevin said the prosecution won't be able to prove who killed Steingasser, nor when or where it happened. 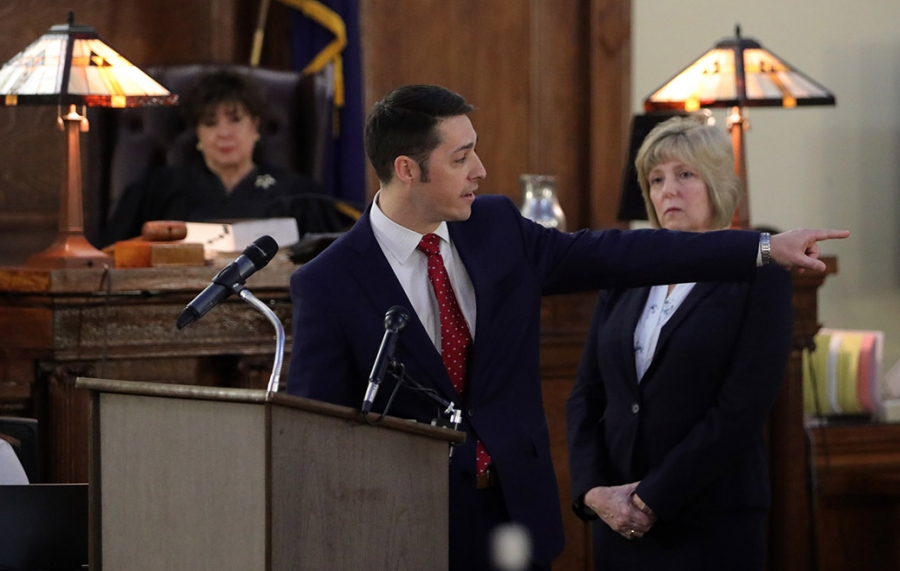 Steingasser's body was found Oct. 25, 1993, in Bond Lake County Park in Lewiston, with her bra around her neck. The Erie County Medical Examiner's Office concluded she had been strangled.

Granchelli and Bowman detailed the varying and contradictory statements Belstadt made to police in the three days after the victim's disappearance Sept. 19, 1993.

"He knew way too much, way too soon," Bowman said. She said Belstadt offered "more than five different versions of where he was in the early hours of Sept. 19, 1993."

Belstadt told police he picked Steingasser up on Oliver Street in North Tonawanda and dropped her off a few minutes later.

"We will prove that was not true," Granchelli said.

The prosecutors said Belstadt enlisted friends to lie to police, telling investigators that he had gone to Canada with the friends after he was pulled over and given traffic tickets in the City of Tonawanda about 12:30 a.m.

Granchelli said Belstadt was so angry about the tickets – Bergevin said he was charged with spinning his tires – that about 1 a.m., Tonawanda police asked him and a friend, Jerry Miller, to leave the station.

Granchelli said Miller and some others planned to go to Canada for some wee-hours partying, but Belstadt refused.

"He was fuming mad. He was dripping with anger, too angry to go to Canada with friends," Granchelli said.

Between 2:15 and 2:30 a.m., three teenagers walking down Oliver Street saw Belstadt drive by and noticed his car was wet.

"The defendant told them he had just come from the car wash, at 2:15 or 2:30 in the morning," Granchelli said.

"You'll hear Joe Belstadt is a car guy," Bergevin told the jury. "From where he lived, you could see the Robo Wash."

Bergevin said there's no question that Steingasser was in Belstadt's car, and she acknowledged that at first Belstadt lied to police about where he went after that.

"That was the rock that started the avalanche," Bergevin said. "That very decision, to lie about what he did next, made him a suspect for the next 27 years. Bad decision. ... Five days later, he went back and told them the truth."

She contested the prosecutors' claim that Belstadt got his friends to lie for him before he went to the police himself. She promised evidence to the contrary.

Bergevin also said there is no medical evidence that proves Steingasser was strangled, and she said that ruling was driven by her bra being found around her neck.

Belstadt, 44, of the Town of Tonawanda, attended North Tonawanda High School with Steingasser in the fall of 1993, when he was 18 and Steingasser was 17.

Belstadt was indicted in April 2018, a month after a DNA test concluded that two hairs found in his car shortly after police seized it in 1993 came from Steingasser's body.

District Attorney Caroline A. Wojtaszek, who is heading the prosecution team, said during pretrial hearings that she can show Steingasser's ex-boyfriend had left North Tonawanda on Sept. 17, 1993.

Bergevin conceded that the two hairs came from Steingasser. One was in the back seat, the other on the driver's floor mat.

But the defense attorney spent several minutes listing DNA and other forensic tests on Steingasser's body and clothing that excluded Belstadt as the source of the samples.

Bergevin emphasized a DNA sample from Steingasser's underwear, which for years was regarded as from an unknown male.

Last June, more than a year after Belstadt was arrested, that DNA was determined to have come from Steingasser's ex-boyfriend.

"Joseph Belstadt is excluded from being in Mandy Steingasser's underwear in every instance," Bergevin said.

She also said a "sperm fraction" found in the back of seat of Belstadt's car was accompanied by DNA from an unknown female, not Steingasser.