The coming spring and summer concert season appears to be one of the most thrillingly dynamic we’ve had in our region quite possibly in decades. But there’s a shadow hanging over it all; one that’s growing darker by the day and becoming increasingly difficult to ignore.

Pearl Jam, which last came through Buffalo in October 2013, announced earlier this week it would be postponing its entire tour because of coronavirus, including a March 24 gig in Hamilton, Ont.

“As residents of the city of Seattle, we’ve been hit hard and have witnessed firsthand how quickly these disastrous situations can escalate,” the band wrote to its fans via social media. “Our kids’ schools have closed along with universities and businesses. It’s been brutal and it’s gonna get worse before it gets better. So we are being told that being part of large gatherings is high on the list of things to avoid as this global health crisis is now beginning to affect all of our lives.”

On Thursday, concert promoter Live Nation announced it would be postponing all of its tours, both international and domestic, with plans to reevaluate the situation at the beginning of April. Tours affected include the Tool date slated for KeyBank Center on May 2, though if the touring ban continues into the summer months, dozens of presently scheduled local concerts will be affected.

This all came hot on the heels of what music industry types consider to be the unthinkable – for the first time in its 34-year history, the immensely popular and densely attended industry showcase known as the South by Southwest (SXSW) Festival had been canceled, following a petition-fueled drive by musicians and industry insiders urging organizers to pull the plug. Ultimately, they never got the chance – the city of Austin, Texas, which hosts the annual event attended by a massive international crowd that exceeded 400,000 last year, did it for them.

"We are devastated to share this news with you," SXSW organizers stated. " 'The show must go on' is in our DNA, and this is the first time in 34 years that the March event will not take place." 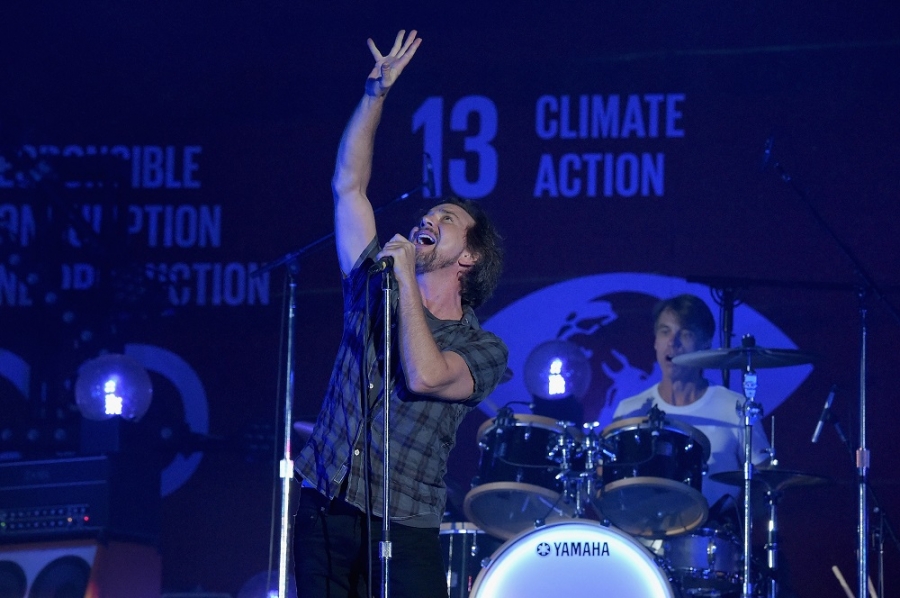 Eddie Vedder of Pearl Jam, which has postponed its tour. (Photo by Theo Wargo/Getty Images for Global Citizen) 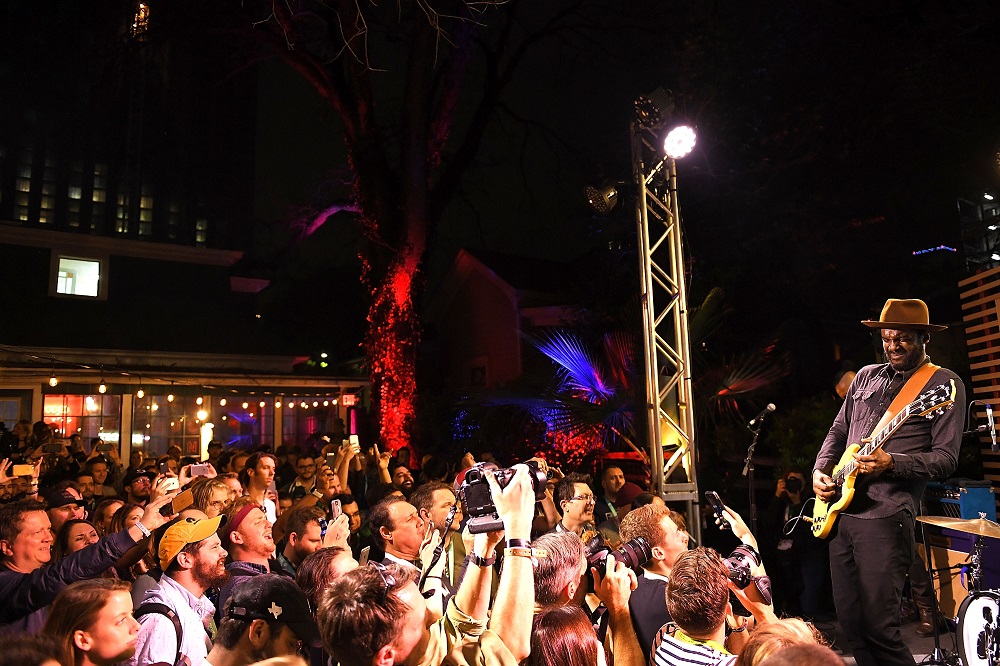 Austin, Texas' SXSW Festival has been canceled this year. (Photo by Matt Winkelmeyer/Getty Images for SXSW)

Other artists, including Kiss, are continuing their tours, but have canceled their lucrative meet- and-greet interactions with fans. The list of canceled or postponed festivals continues to grow as well, with Coachella and Stagecoach (both rescheduled for October) joining a roster that already includes SXSW, the Tomorrowland Festival, Knotfest Japan, the Korea Times Music Festival in Los Angeles and Miami’s Ultra Music Festival.

The likelihood of this list growing in the coming weeks is increasingly significant.

All of this creates a nightmare scenario for concert promoters, who must walk the fine line between public responsibility and financial disaster.

“I believe that all promoters feel the responsibility to ensure fan safety and make sure everyone feels comfortable in their environment when they bring large groups together,” said Jennifer Brazil, co-founder and co-president of the Borderland Music + Arts festival, held in East Aurora’s Knox Farm State Park in September since 2018.

“That being said ... we cannot live in isolation or fear on a daily basis, so we need to do our best to continue to be smart and respectful to others by following CDC guidelines regarding hand-washing, staying home if you are sick, and other sensible precautions, so that the spread of illnesses like coronavirus are well under control and we don’t have to limit the large, collective events that we all enjoy.”

Josh Holtzman, vice president of Buffalo Iron Works and producer of the annual Cobblestone Live Festival slated for July 31 and Aug. 1, said this about whether the recent spate of postponements and cancellations had him worried:

“I’ll always believe that the well-being and safety of the fans, artists, staff and community must come first. There is some concern, but not major concern at present. Certainly, we’ll be keeping a close eye on it, but I’m feeling very positive that Cobblestone Live and our other summer events will be able to move forward.”

Artpark has already announced one of the most tightly packed and, frankly, incredible lineups in the history of the venue for the 2020 season. Dave Wedekindt, director of marketing and sales for the venue, had a major hand in assembling that lineup.

“Our first major event is not until mid-May, and with the majority of our programs scheduled between June and August, we are cautiously optimistic that the coronavirus spread will be contained and hopefully greatly reduced by the time audiences gather again at Artpark,” Wedekindt said. “In the meantime, we are plugged into New York State’s emergency preparedness and response efforts and will take any necessary steps to protect visitor and staff health as the situation develops.

“Touring artists and their representatives are also certainly very aware of this national and international situation. But at present, the artists contracted to perform have not raised any concerns regarding their performances, so we are moving forward with the schedule as planned. In the rare event that a performance needs to be postponed or canceled, we will certainly address credits or refunds with ticket holders.”

Wedekindt, who said no artists contracted to perform at Artpark have raised any concerns about their performances, said this about whether promoters can take any action to prevent last-minute problems in terms of event insurance: “Unfortunately, coverage for coronavirus has been an exclusion in cancellation insurance for many weeks now. There is no carrier that I’m aware of offering that coverage at this time.”

Full-time touring musicians have their own perspective.

Tim Lefebvre, veteran of the Tedeschi Trucks Band, is currently the bassist with the Black Crowes, whose much-publicized reunion tour is slated to hit Darien Lake Performing Arts Center on July 31.

“I think the live music biz is dead for the next 6 months,” Leferbve said via text message. “I hope I’m totally wrong. But if you look at sports ... it absolutely does not bode well for live music. ... Ultimately, I’m OK with erring on the side of caution.”

"We are working with artists, agents and managers to determine the schedule going forward," Donny Kutzbach of the Town Ballroom and Funtime Presents said. "Primarily, we are taking direction from the city, county and state on dealing with the public health concerns in trying to stem the spread of coronavirus."

Jason Hall of the Sportsmen's Tavern and The Cave said business will proceed as usual at both venues.

"We aren't planning on cancelling shows," Hall said. "Business has been OK at this point, but we are concerned. We're just hoping that people are practicing common sense."

Other venues are starting to see some cancellations, however.

"We had a show with ZoSo, the Led Zeppelin tribute, coming on March 14, which we’ve cancelled because postponement was not possible with their schedule,” Dave Taylor, president of Empire State Concerts and talent buyer for the Rapids Theatre in Niagara Falls said.

“But in general, we are pushing ahead at the Rapids, because our bigger shows are starting in May, and we aren’t foreseeing a problem at that point. However, there is always the possibility that artists will cancel their tours, though we’ve been given no indication that any of them will, at this point.

"Basically, I’m proceeding as if everything is normal, until it isn’t normal.”

On the national and international level, members of the media, health care professionals and experts on public health policy are readily weighing in. A common theme in much of their writing on the topic concerns the idea of social distancing – a self-directed avoidance of public gatherings.

One piece in particular pulls no punches in its assertion social distancing is the greatest power the public holds, not in defeating the virus, but in containing it. Writing in The Atlantic beneath the headline “Cancel Everything,” Johns Hopkins University associate professor Yascha Mounk insists “anyone in a position of power or authority, instead of downplaying the dangers of the coronavirus, should ask people to stay away from public places, cancel big gatherings, and restrict most forms of nonessential travel.”

The day after Mounk’s piece was published, the World Health organization officially categorized coronavirus as a pandemic. All but immediately, Live Nation, the world’s largest concert promoter, saw its stock plummet 15.6%.

All of this suggests things will get worse before they get better, and that the live music industry will be greatly affected by the continued spread of the virus. The wheel is clearly still in motion, but in the meantime, a bit of self-regulation would seem to be in order.

“Here in Seattle what we are witnessing we would not wish for anyone,” wrote Pearl Jam’s Eddie Vedder in his band’s tour postponement announcement. “What we do wish for the rest of the country is that they can avoid the harsh negative effects of this and retain their sense of community and take care of one another. Just as we look forward to our next concerts and the ability to gather together and play loud songs, as energized as ever.” 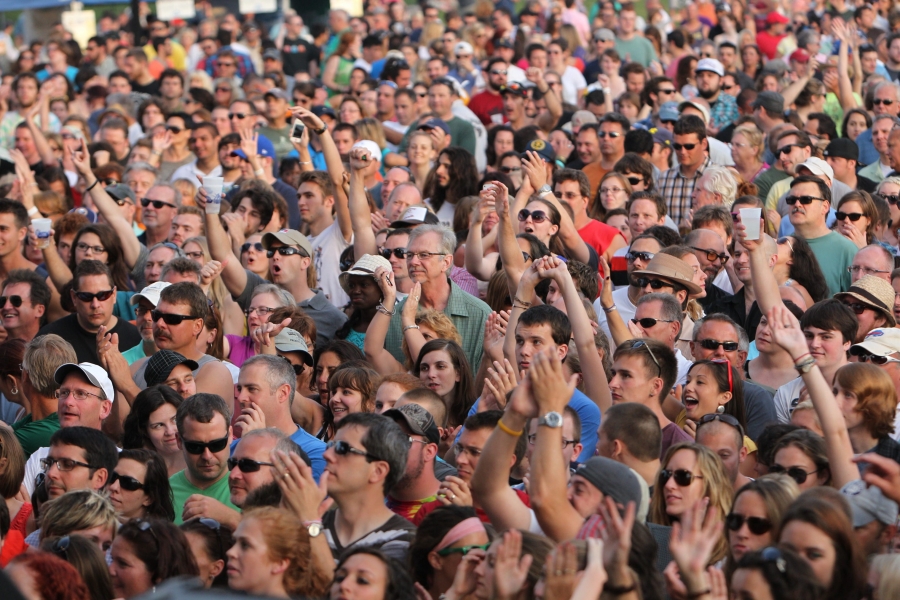 Organizers remain hopeful we will we see concert crowds like this in Western New York this spring and summer. (Sharon Cantillon/Buffalo News)