There was a slight chance the legendary Connecticut women’s basketball coach was going to visit Buffalo to see prized recruit and Williamsville South junior Amari DeBerry in person during Championship Week.

Dolan never heard back from Auriemma, but there he was Wednesday night – catching a glimpse of DeBerry at the Buffalo State Sports Arena during her team’s biggest game to date.

DeBerry played well before her future coach, before having to sit for about 8 minutes in the second half because of foul trouble. However, the Dolan sisters and the rest of the Billies picked up the slack in the overall Section VI Class A championship game, as Williamsville South defeated determined Class A-1 champion Hamburg, 64-51, before more than 1,000 fans.

DeBerry followed up Sunday’s dominant 34-point performance with a 19-point, 10-rebound, five-assists and five-steals showing against a Bulldogs team playing in its first overall final since 2005. The Billies were appearing in their seventh straight state-tournament-qualifying game.

DeBerry wasn’t the only Billie to shine in the third meeting between the teams (all won by the Billies). Senior Hannah Dolan finished with 17 points and six assists, while freshman Gretchen Dolan added 15 points, six assists and several steals – most of which came with DeBerry on the bench.

“I told the girls they could do this. We’ve always tried to prepare them for different situations,” coach Dolan said. “We knew we just had to stick together. At halftime we told (Gretchen) just to stay aggressive. Your shots will fall if we set good screens. … I’m happy. I’m proud of the girls.”

The Billies (20-3) advance to Saturday’s Far West Regional where they will face reigning Federation champion Pittsford Mendon at 7 p.m. at Rush-Henrietta High School. It’s a rematch of a regular-season clash won by South in December.

DeBerry did not know Auriemma was in the building until just before player introductions, when a South assistant pointed to the far right corner of the concourse behind the last row of seats. Auriemma stood there before taking a seat to take in the game.

It didn’t take long for DeBerry to give her future coach a sampling of things to come. She scored five points in the first 2 minutes, 31 seconds – including a no-doubt-about-it 3-pointer. She followed that by blocking a shot, and was later rewarded with an assist when she passed out of a double team to an open player who then scored.

“It’s always nice to have them come out and support,” DeBerry said of Auriemma and the UConn family. “I’m very grateful for everything.”

It’s also nice having her Billies family support her after she picked up her fourth foul early in the third quarter. South led by nine at the time, but Hamburg failed to make a dent in the deficit before DeBerry returned with just over 6 minutes left in the fourth quarter.

That’s because Gretchen Dolan scored eight of her points during that stretch and played some determined defense – forcing tie ups and steals. Hannah Dolan had a layup and a key block and Ava Urbaniak had a basket and an assist passing out of a double team on the aforementioned Hannah Dolan layup.

“When Amari’s on the bench, we knew we had to come out, finish strong and never stop playing,” Gretchen Dolan said.

Dolan said it was different playing with Auriemma in the stands.

“It was a little nerve racking, especially for Amari,” Dolan said, “but she played great and we all have her back.” 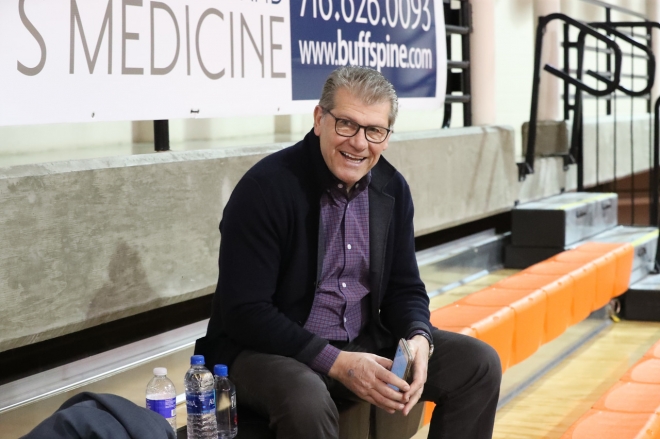