The New York State Outdoorsmen Hall of Fame honors men and women who have made significant contributions to conservation or preserving the heritage of outdoor sports.

Selection for this distinguished group is not based on individual achievements, but rather what they have done for others. More than 250 men and women have been inducted into the hall. Every year, deserving individuals are honored by the OHOF and recognized at the annual banquet.

This year’s list of 10 inductees includes three from Western New York. That number could be much larger, but it’s all about the extensive nomination process.

For Joseph “Jojo” Wilczewski of Amherst, the nominations packet put together by his fellow members in the Niagara Musky Association was nearly 50 pages long. Letters of support from both the Department of Environmental Conservation and NMA documented why Wilczewski needed to be a member of the OHOF, including endorsements from NMA President Scott McKee, who was inducted to the hall in 2016, and Anthony Scime, who received the honor in 2017.

“As was the case with Tony Scime,” McKee said in his endorsement letter, “when I learned I was inducted into the New York State Outdoorsmen Hall of Fame, I was shocked and certainly humbled because I believed Joe Wilczewski was so much more deserving of the honor.”

To start with the accolades, one need only say that Wilczewski is one of the cornerstones of the NMA, one of the most proactive fishing clubs in research and conservation work in Western New York, if not the state. The group has made a name for itself in 25-plus years, making a difference on the local outdoor scene. 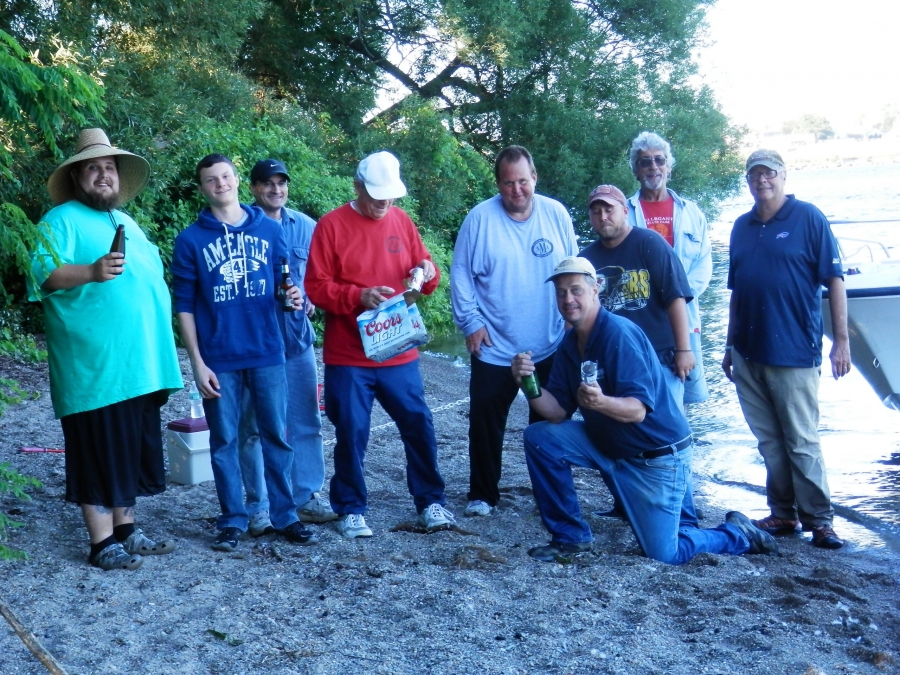 Jojo Wilczewski (kneeling) doesn't do clean-up duty alone. He has a willing group of assistants cleaning up all kinds of trash. (Photo courtesy of John Jarosz)

“When I joined about six years ago, one of the members told me that the NMA, regardless of the work they do, is primarily a ‘fishing club,’ ” said John Jarosz of Lake View, the conservation director for NMA. “Over the years, I've come to believe that statement is not true and is the primary reason I stay in the club. It certainly isn't because of the number of muskies I catch. It's really because of the conservation work. The philosophy of ‘giving back’ is a better investment in the future than putting money in the stock market.”

Wilczewski has been a tireless and unselfish volunteer for more than a quarter of a century, focusing much of his work on the Niagara River. He spearheaded annual clean-up efforts on Strawberry and Motor islands starting in 1995, continuing to present day. In 2012, he identified beaver destruction on those islands and started a “beaver abatement program” to keep the animals from chewing down trees.

He is an active participant in the NMA Angler Diary Study, believed to be the longest running study of its kind in North America. This is an important component to DEC’s monitoring and management of the musky fishery. He was a participant in the NMA tagging studies from 1996 to 2001, as well as from 2016 to 2019. He also constructs steel leaders for musky anglers and sells them at cost at meetings to allow anglers to more effectively catch and release these fish, a task he’s performed since 1998.

These are a few of his contributions, not for himself, but for future generations to come. It’s for the preservation of our outdoor heritage and outdoor sports. 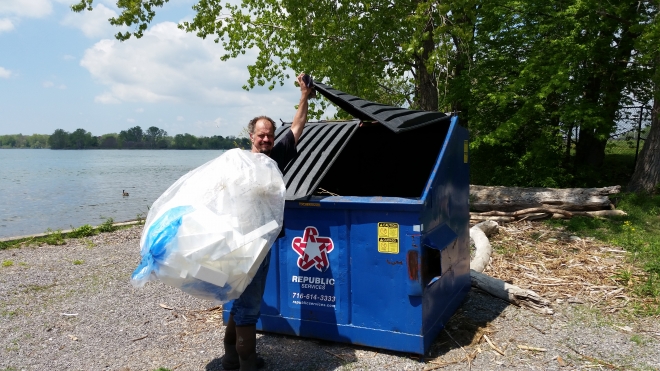 Keeping Strawberry and Motor islands free of garbage has been a personal quest for Jojo Wilczewski. (Photo courtesy John Jarosz)

“It’s a great honor to be recognized by my peers and the New York State Outdoorsmen Hall of Fame,” Wilczewski said. “Receiving letters of recommendations from various DEC biologists, and my fellow Niagara Musky Association members really means a lot to me. Thank you. I have never been one to look for attention or notoriety. I was only trying to give something back to maintain and enhance the Niagara River fishery by doing what I thought needed to be done. When you see something you love in need of help, who wouldn’t do whatever they could? Not being one to sit idly by, after 30 years I guess it adds up.

“Living in Western New York, I grew up in one of the best freshwater fishing locations in the world. I’ve always wanted to spend as much time outdoors; starting as a wee lad fishing creeks, canals, ditches and ponds, while searching for bluegills, bass, pike, insects, snakes, turtles, frogs, birds, muskrats, beavers, basically anything that moved. As I grew older, I turned my attention to Lake Ontario and the giant salmonids of Olcott and Wilson. There is nothing like dueling with a giant King before breakfast, I always say. 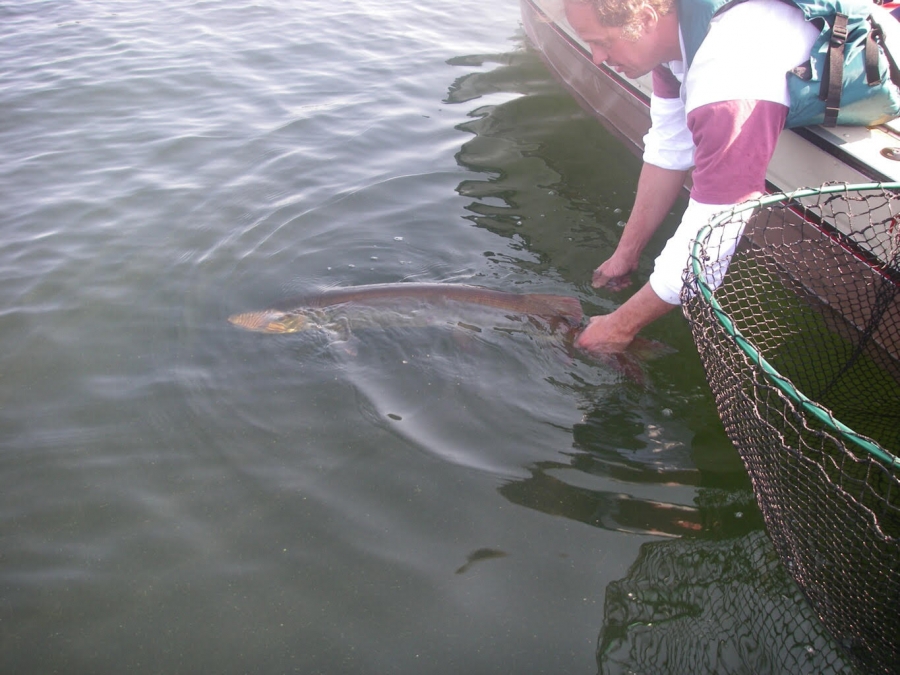 Jojo Wilczewski catches some fish, too, like this musky he released back into the Niagara River. (Photo courtesy Scott McKee)

“I would like to thank the Niagara Musky Association for nominating me. I would like to thank Tony Scime, Scott McKee and our other board members for being mentors to me, and their endless, selfless, tireless, unwavering dedication towards the Buffalo Harbor and Niagara River fisheries. The friendships I’ve grown through our club and our mutual love for the Niagara and Buffalo Harbor keeps me going. I would also like to thank all the club members that have helped with our various conservation projects over the years. I never could have done it without them.

“Most of all I would like to thank my mom for her love, support, fortitude, perseverance and the keen sense of right and wrong she instilled in me. Teaching me that it was my responsibility to help others and to do what I could to help, and to always clean up after myself. Despite my childish personality, objections and resistance, she did a good job. Part of this award is certainly hers. Lastly, allow me to paraphrase the immortal words of President John F. Kennedy: Ask not what the river can do for you, but you can do for the river.”

The 2020 induction banquet will be held April 25 at Theodore’s Restaurant at 3231 Seneca Turnpike (Route 5), Canastota. The dinner is open to the public. Family, friends and hall of fame members are invited to join in this evening of celebration. Registration will begin at 5 p.m., with dinner at 6. Reservations must be made by April 17 by contacting Scott Faulkner at sfcf@tds.net or 315-829-3588. The cost of the dinner is $25 per person.

According to Jarosz, Wilczewski’s familiar sign-off is: Alabalabalajojoout. There are still plenty more sign-offs to come.

We're just taking a timeout for some deserving recognition.