Who is the little boy in photographer Dave Schofield’s most famous photo? Schofield wondered that for decades. And now he knows the answer.

Carolyn Maxwell was 3, or nearly so, when the photo was taken in late 1972 or early 1973. And the backstory of how she came to be in the spot where the Buffalo Sabres entered the ice that night is a doozy.

Turns out she got lost in the arena’s crowded corridors and, through happy happenstance, ended up face-to-face with Sabres captain Gerry Meehan. That’s the magic moment captured by Schofield’s camera.

Grown-ups typically don’t have many fully formed memories from when they were 3, but this was a central moment of her childhood. She retains strong memories of the emotions from that remarkable night, even if not all of the salient details.

The officer in question is the late Art Starks, who was stationed for years at the spot in the Aud where the Sabres entered the ice. He’s the one smiling in the background of Schofield’s famous photo. 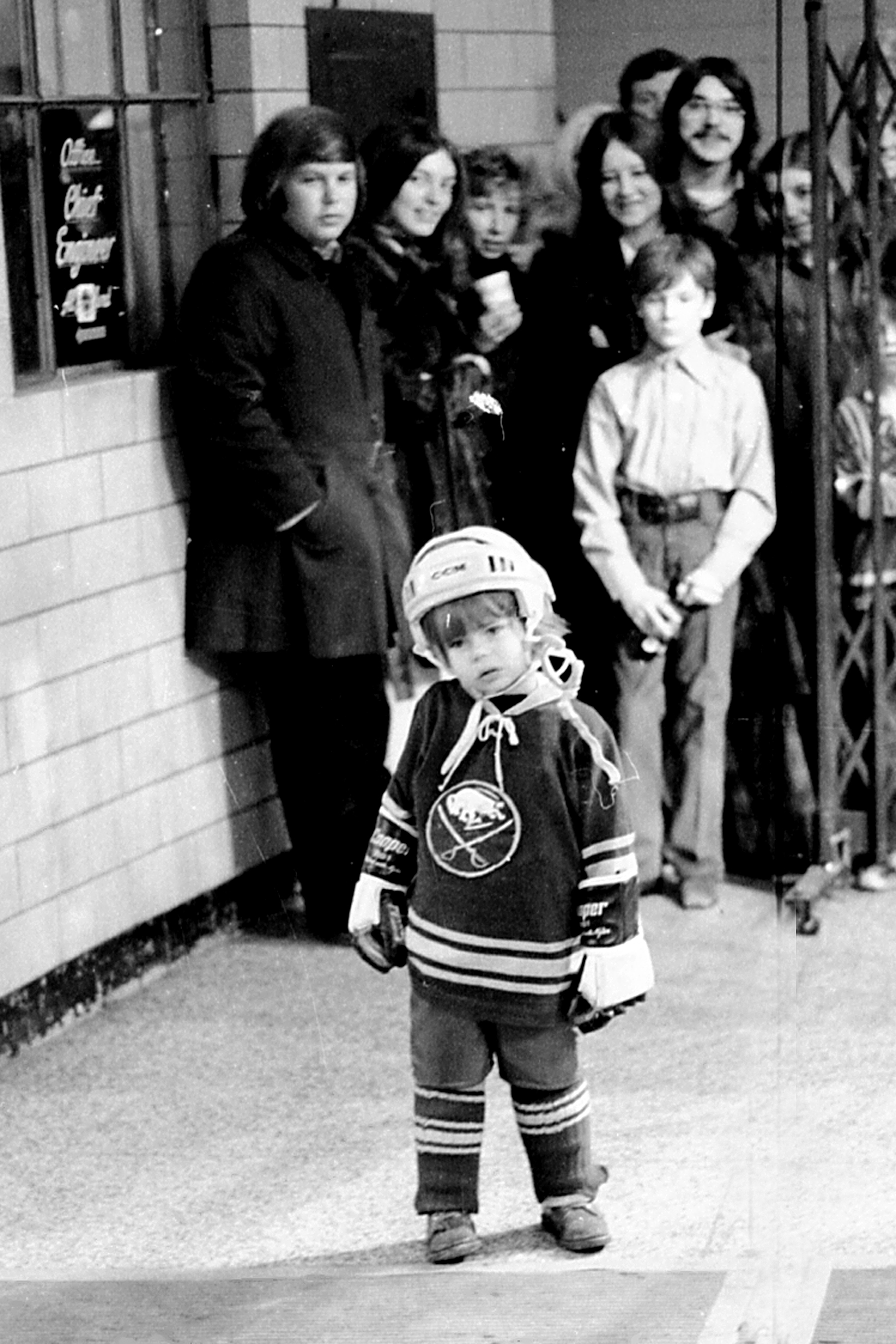 “He made me feel safe,” Carolyn said. “I remember not being worried at all.”

Carolyn Campbell – that’s her married name – lives in Sodus, a town on Lake Ontario between Rochester and Syracuse where she teaches science to seventh and 10th graders. She turned 50 in January and through the years has often told the story of the night she got lost at a Sabres game. Even so, as it turns out, until last week she never knew about her star turn in the Meehan-and-kid photo.

That’s when The Buffalo News ran an online story about that photograph with a related piece asking if anyone knew the identity of the small Sabres fan. That included a previously unpublished photo that shows the child’s face more fully than does the one with Meehan.

Lauren Martin was scrolling through Facebook when she saw the photo on The News’ page. She thought it looked like her husband, Tom Maxwell, who is Carolyn’s brother, so she had him take a look at it.

“I thought, ‘My God, that looks exactly like me,’ ” Tom said. “But then I thought, ‘If that’s me, I’d remember it.’ Something was a little off. And then I looked closer and it hit me: ‘That’s my little sister.’ ”

So he asked Carolyn to look at the photo – and she had two immediate thoughts. First: Hey, that’s me. And second: Hey, that’s the security guard who took care of me. She hadn’t seen Starks, or an image of him, since that night, but she says his friendly face is forever imprinted on her memory.

Carolyn is the youngest in a family of nine children. Tom, who’s No. 8, is the brother who was at the game that night with Carolyn and their late father, Robert Maxwell, who was a teacher at Alexander Hamilton Elementary in the Ken-Ton School District.

Their father’s brother George was a Sabres season ticket holder – two seats in the second-to-last row of the blues – and their father would buy a batch of games from his brother each season and take his kids on a rotating basis. On this particular night their father took Tom, who was 5, to sit in the second seat – and Carolyn as a lap child, which the Sabres allowed in those days.

Tom says he and Carolyn went off to the bathroom on their own during the game, which seemed fine when the corridors were empty. He says he was waiting for her outside the women’s restroom when he heard a roar from the crowd and ran back to see what had just happened.

But by the time he got back, Carolyn had already come out of the washroom and wandered off. The period ended soon after, and Tom figures she got lost in a jumble of fans rushing to the concession stands before he was able to find her.

Carolyn ended up at security on ice level – perhaps taken there by another security guard, or perhaps by another fan who had found her – and from there it appears that Starks took charge. His assigned post near the Sabres’ locker room would explain how Carolyn got inside the sliding metal gate that closed off a corridor where the Sabres would go to and from the ice at the Aud.

Here’s the rub, though: Carolyn doesn’t remember why she’s wearing a full hockey uniform: helmet, gloves, jersey, pants, socks – pretty much everything except for skates. She wonders if maybe Starks kept gear for lost kids in his office. Or maybe she decided to put it all on before leaving home for what she believes was the first hockey game she ever saw.

“We had big blue tubs just filled with all kinds of sports equipment,” she said. “That’s how it works when you have nine kids.”

Tom says he tried to find his lost sister for a while in the crowded corridor and then returned to their seats to tell his father what had happened. Tom thought he was in big trouble, but before long the public address announcer called for Mr. Maxwell to come to security to find his daughter. Tom figures she was missing for maybe 20 minutes.

That’s nothing: Her identity has been lost for 47 years.

So how can we be sure Carolyn is the kid in the picture? Well, take a look at this family photo of her when she was that age. Sure looks like the kid in the Schofield photos, doesn’t she? 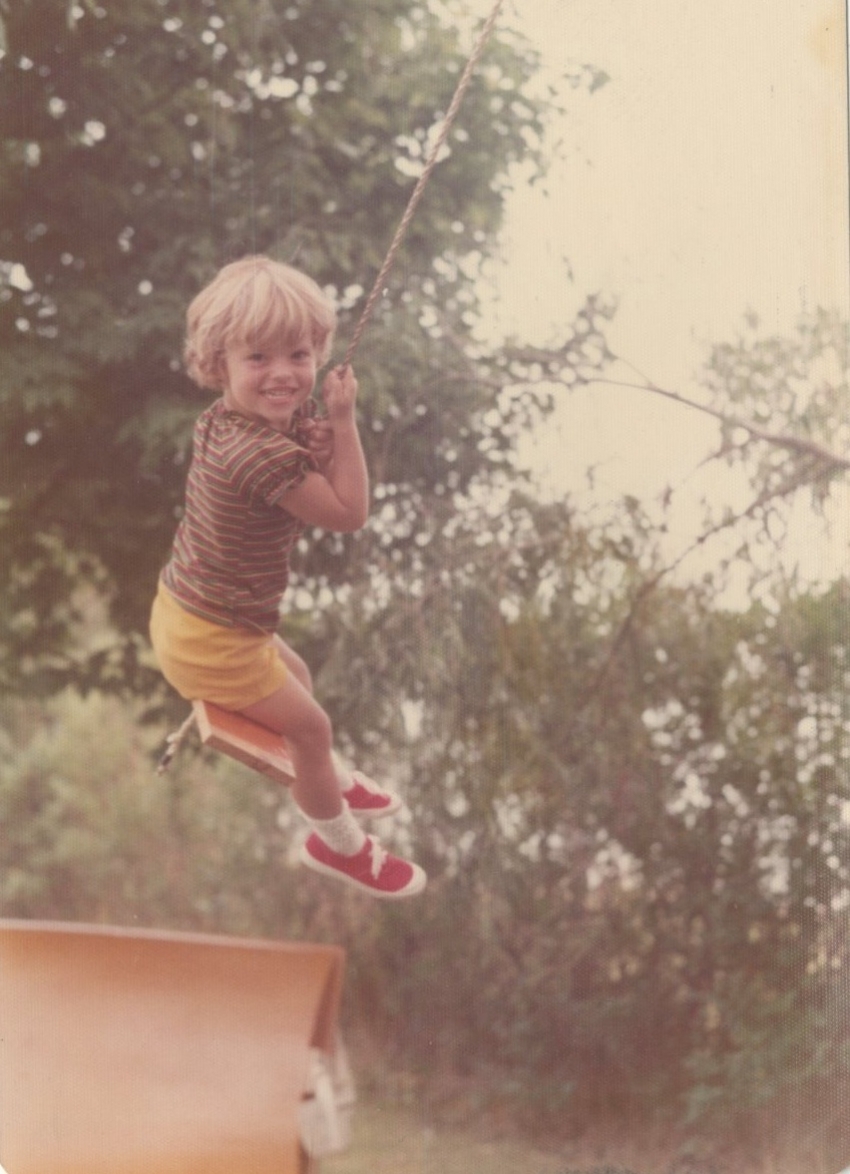 Carolyn Maxwell around the time the photo was taken. (Maxwell family photo)

And then there’s her hairstyle in the family photos – long bangs in front, short in the back. That looks a lot like the kid’s hair in the Schofield photos. It’s a cut that’s known as a Dutch boy, and Tom says their mother confirms Carolyn sported that look circa 1973.

Taken together, the photographic evidence made us think we’d found our little Sabre from across the years. And Carolyn says those photos – added to her vivid memories of getting lost that night – made her 95% sure that she is, in fact, Sabre Kid.

So how could we close that gap to 100%? Well, while we were making multiple calls trying to verify her story as best we could, Carolyn mentioned something. She told us that when she was little, she had a freckle on her nose.

Alas, no luck. When Schofield enlarged the photo too much, the image would blur; that’s what often happens with old black-and-white photos.

But wait. When he enlarged it just a bit, he could see something – yes, there it was! He found a freckle just left of center on the bridge of her nose. For Schofield, it was a eureka moment. 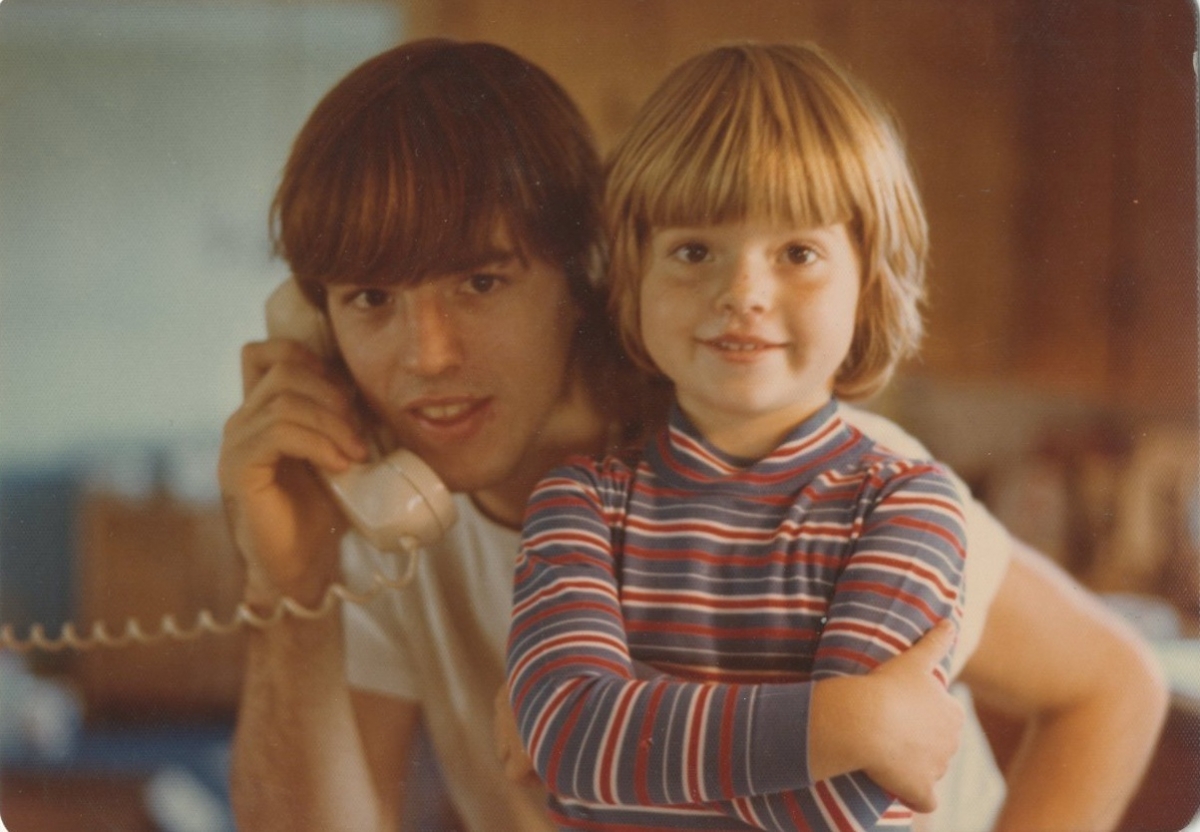 Carolyn Maxwell with her brother, Robert, and, on her nose, the telltale freckle. (Maxwell family photo)

“I always hated that freckle when I was little,” Carolyn said. “But I look at those pictures now and I think, ‘You know, I was pretty cute with that freckle.’ ”

Heck, without it, how could we have known for sure that she’s the one?

“I guess God gave me that freckle for a reason,” she said, laughing. 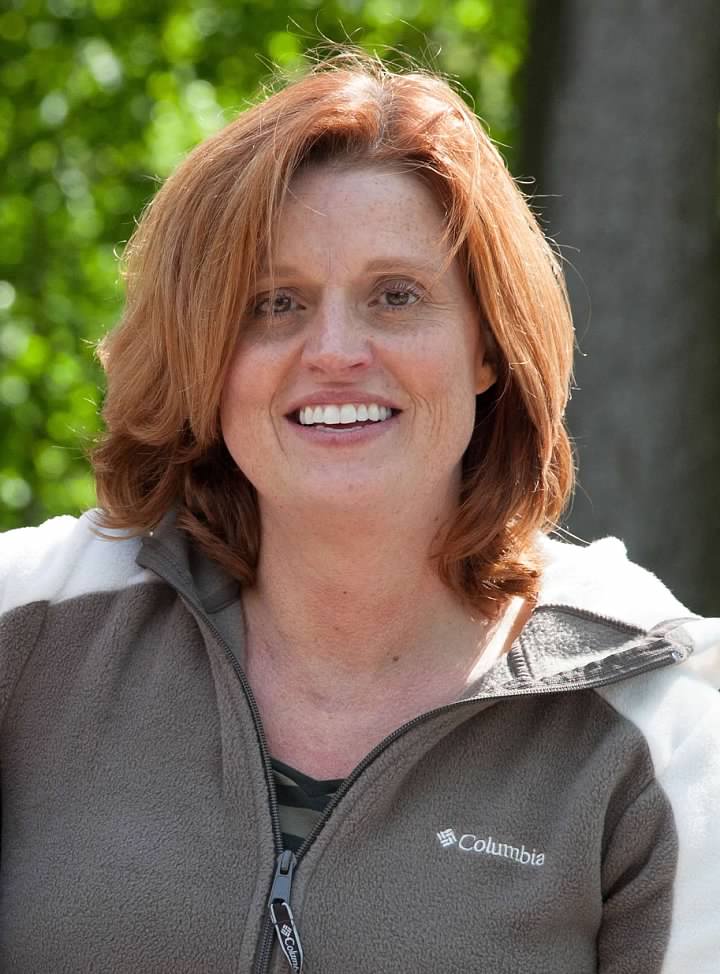 The freckle on her nose has disappeared with time, but she still has other freckles on her face. She likes them now, as she figures they make her look younger than her 50 years.

Schofield, who’s 72, plans to drive from his home in New Jersey to Carolyn’s home in Sodus this spring. He wants to give her an 18-by-12 print of the photo that he’s displayed in his home for many years. And, more than that, he simply wants to meet her. For the history – the intimacy, even – that they share.

“I’ve been looking at her for so long,” he said, “it’s like she’s a member of the family.”

Schofield always thought his little Sabres fan was a boy, which tells you a lot about societal assumptions, then and now. He is delighted to find out the real story, which turns out to be so much better than he ever could have imagined.

Carolyn is delighted, too. It’s not often that any of us get to revisit the wide-eyed innocence of our childhoods – or, in this case, girlhood.

“All these years they’ve been looking for a boy,” Carolyn said. “And when I figured out it was me, I thought, ‘How funny is that?’ ”

A child was lost on that long-ago night. And now she is found, all over again.