I want the world to know that I am in love with Carolee Carmello. She is currently starring in “Hello, Dolly!” at Shea’s, and while most Buffalonians may not have heard of her, she’s a bona fide Broadway star, with her caricature on the wall at Sardi’s restaurant and everything.

“Hello, Dolly!” takes on the personality of whomever assays the title role. From Carol Channing to Ginger Rogers, to Pearl Bailey, to Mary Martin, to Ethel Merman, to Bette Midler, productions of "Dolly!" are known by the names of the stars who play matchmaker Dolly Gallagher Levi. Now it’s Carmello’s turn.

Not a television star looking to revive a career, or a real housewife trying to start one, Carmello is the real article. A first-rate Broadway performer who has appeared in 14 Broadway musicals and has three Tony nominations to her credit, she has originated many important roles.

She has starred on Broadway in “Mamma Mia,” “Finding Neverland,” “Sister Act,” “1776,” “The Scarlet Pimpernel,” “City of Angels,” “Urinetown” and “Kiss Me Kate.” She originated roles in “Parade,” “Tuck Everlasting,” “Scandalous,” “The Addams Family,” “Falsettos” and “Lestat.” In addition to these, I have seen her sing “Zip!” in “Pal Joey” at the Huntington in Boston, as Anna in “The King and I” at the Papermill in New Jersey, and as the Liza Minnelli character in a musical version of “Arthur” at Goodspeed in Connecticut. 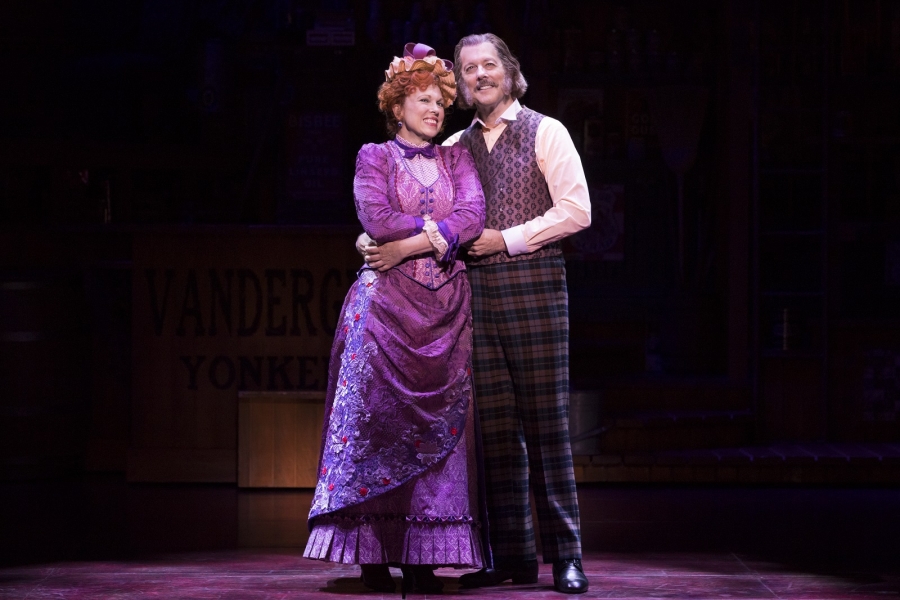 Broadway veterans Carolee Carmello and John Bolton are both a delight to watch in "Hello, Dolly!" at Shea's Buffalo Theatre. (Photo by Julieta Cervantes)

Seeing her as Dolly is a rare delight, and it was a privilege to watch her as the scheming and endearing widow, hired by Yonkers merchant, Horace Vandergelder, to find him a wife. It was especially thrilling to see her on the very stage where I saw Carol Channing play the role back in 1994.

With her gloriously soaring voice and incandescent charisma, Carmello proved she was born to play this role. Her comic timing is priceless. Our eyes are irresistibly drawn to her graceful and captivating stage presence. We can’t help falling in love with this woman, whether she’s teaching two hapless clerks to dance, descending a glamorous staircase, or eating an impossibly large mountain of dumplings.

“Hello, Dolly!” is one of the most beloved musicals in the American theater, and I felt the room swaying at Shea's while the band was playing. The musical score is brimming with so many of my old favorite Jerry Herman songs from way back when. This is a glorious production, directed by Jerry Zaks, with choreography by Warren Carlyle, done as homage to the great Gower Champion, complete with galloping waiters.

Even when it premiered in 1964, “Hello, Dolly!” was willfully old-fashioned. It boasts an irrepressibly tuneful score and a story, faithful to Thornton Wilder’s “The Matchmaker.”

The cast surrounding Carmello is superb. John Bolton, also a Broadway veteran, is excellent as hilariously friendless and mean Horace Vandergelder, the well-known half-millionaire from Yonkers.

Daniel Beeman and Sean Burns are adorable as Cornelius Hackl and Barnaby Tucker, the clerks at Vandergelder’s hay and feed store.

Colin LeMoine is charming as the artist Ambrose Kemper, who is in love with Horace’s perpetually crying niece, Ermengarde, played with unbridled comic angst by Laura Sky Herman.

This production, first mounted with Bette Midler on Broadway in 2018, has been populated with strong dancers, who make the proceedings seem to float across the Shea’s stage.

Ernestina, Horace’s embarrassingly inappropriate date, is always a fun character, and Jane Brockman nails the part. Blake Hammond is marvelous as Rudolph, the harried maître de at the Harmonia Gardens restaurant and cabaret, where Dolly makes her magical return, descending the staircase in a scarlet gown to the title tune.

That bejeweled scarlet dress and an explosion of other luscious and colorful clothes were designed by the great Santo Loquasto, who also gives Oliver Smith’s original set a lively and appealing update.

In the final analysis, however, this show rises or falls on the talents of its Dolly, and in that regard, Shea’s is offering audiences a treasure in the divine Carmello.

For those who want more of her after enjoying her in “Hello, Dolly!” Carmello can be seen in the award-winning web series, “Indoor Boys.” Meanwhile, she is here, in person, in an iconic Broadway role, through March 15.