In six games with the Buffalo Sabres, newly acquired forward Dominik Kahun has worked to assimilate with an organization desperate for more offensive firepower.

Kahun – a 24-year old who will become a restricted free agent this offseason – was part of a three-player trade at the deadline. In exchange for Kahun, the Pittsburgh Penguins acquired Conor Sheary (his second stint with Pittsburgh) and Evan Rodrigues.

While much of the trade’s focus was about Sheary blending back into Pittsburgh’s middle-six as they push for the postseason, Buffalo’s attention has been on the longer-term retention strategy for Kahun. Though he has been a cheap commodity since entering the league, he is expected to get a pay adjustment in the offseason.

On a per 82 game basis, Kahun has averaged 15 goals and 26 assists (41 points) in stints with Chicago, Pittsburgh and Buffalo.

What is a bit more impressive is that Kahun is scoring at those rates almost exclusively at 5-on-5 – Kahun has only seen limited second power play action with Chicago and Pittsburgh. At 5-on-5, his 2.1 points per-60 minutes is in the 87th percentile over the last three seasons, and a number of the forwards surrounding him as comparables are quite impressive:

Is Kahun as good of a scorer as, say, Vladimir Tarasenko? Probably not. He is much less competitive on goal scoring than he is on assist generation (and consequently point totals), as one example. He also has enjoyed playing with any number of skillful linemates over the last three seasons – Alex DeBrincat and Jonathan Toews in Chicago, and Jared McCann and Evgeni Malkin in Pittsburgh. And, of course, simple scoring rates don’t help us quantify other important aspects of the game, like what happens on the defensive side of the ice when Kahun is on shift.

Knowing Buffalo is a team in flux, a lot of the remainder of the regular season will be spent figuring out what pieces fit into the longer-term plan for this team, and how those pieces complement one another.

In the early days after the Kahun deal, Krueger has tried to blend Kahun into more of a hybrid checking line role, playing a sizable number of minutes with Marcus Johansson and Jimmy Vesey. (It should be noted that Kahun, a left-handed shot, has experience at both the center and wing positions; I would anticipate that we see Buffalo try him in a few different spots over the remainder of this season.)

So far, results have been mixed. Kahun has four points in six games, but his line has spent the lion’s share of time defending the run of play. In those six games, Kahun’s line is getting about 41 percent of the shots and 36 percent of the expected goals. Those numbers aren’t worth fretting over quite yet considering the sample, but at a minimum they are something to monitor.

In a bit of a defense of those poor underlying numbers, Kahun’s had a bit of a challenging usage tree. The team’s first swing at integrating him has been in that historically ill-fated middle-six role where no minutes are shared with playmakers in the form of Sam Reinhart or Jack Eichel. 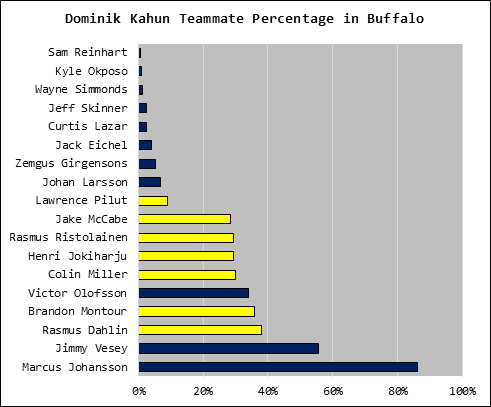 Part of this exercise is to try to figure out how to answer the million- (billion-? trillion-?) dollar question of developing a competitive roster beyond the team’s top line, so it’s no surprise that Kahun has found himself front and center there. But I do think at some point they are going to try to figure out a way to tie him to one of the two big playmakers on this roster, if only to see where Kahun’s offensive ceiling might be.

That said, this is a recurring challenge for a Sabres organization that is struggling to piece everything together. It’s quite hard to evaluate much of the forward talent on this roster because so much of it appears contingent on whether a player gets ample ice time with Jack Eichel or Sam Reinhart. That's not necessarily because of how dynamic they are, but because of how impotent the rest of the lineup is.

The Kahun experimentation will continue. And for a Sabres team well outside the playoff race once again, these smaller storylines will continue to take center stage.