When career restaurateurs shut down a successful operation, they often feel obliged to hold out hope to mourning customers.

Once discovering the joys of temporary retirement, most make it permanent. That goes double for the chef-owners, whose 80-hour weeks are often the jet fuel keeping those places aloft. So in 2017, when Vincent and Linda Desiderio wrapped up 20 years of drawing crowds to the corner of Genesee Street and Harris Hill Road, I could only hope that I would meet Linguine’s remarkable calamari salad once again.

Once a restaurant stops running, and key cogs are lost, it’s hard to get it roaring again. But a developer made the Desiderios an offer, and Vincent was getting itchy pasta-making fingers.

“You can only travel so much,” he said, announcing a new, bigger Linguine’s.

It’s a build-out of the former Water Lily Café, opened in August a few hundred yards west of the old place. There’s a vast parking lot and a patio where diners may enjoy clement weather. 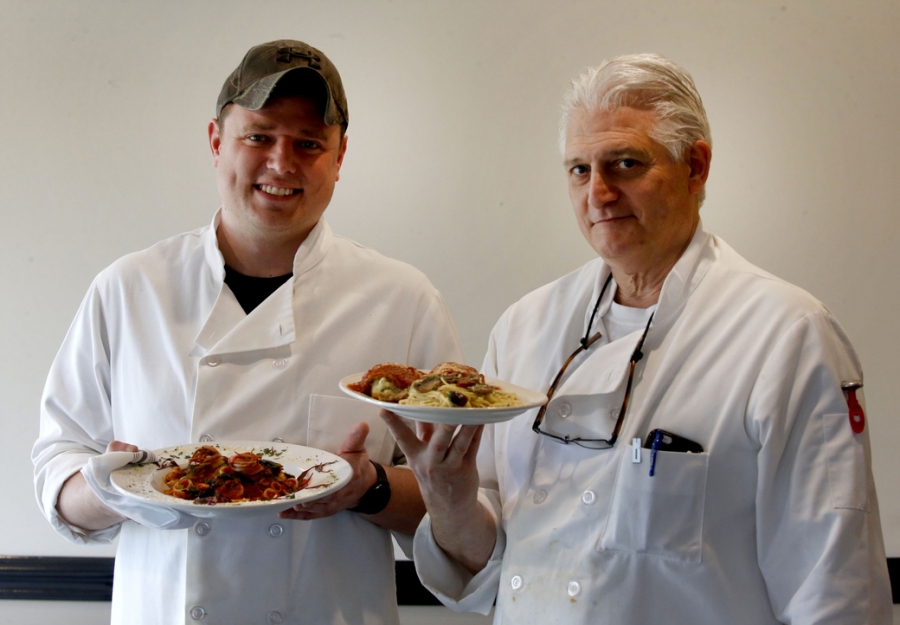 Inside, a bar to the right of the entrance serves as a spot to chat over a glass, as the Desiderios were the night I visited. The hostess said we would need to wait for our last guest in the half-empty restaurant, but relented after five minutes.

Our table, next to a sort-of-wall beside the partially visible kitchen, gave us a sweeping overview of the dining room. A chalkboard carried four specials, a much narrower selection than the last dining room that was practically plastered with dish placards.

The calamari salad wasn’t on the menu. Desiderio told me later that it’s available by request. If you dig delicate seafood in light lemon-cream with capers and cloves of sweet roasted garlic, ask for it. 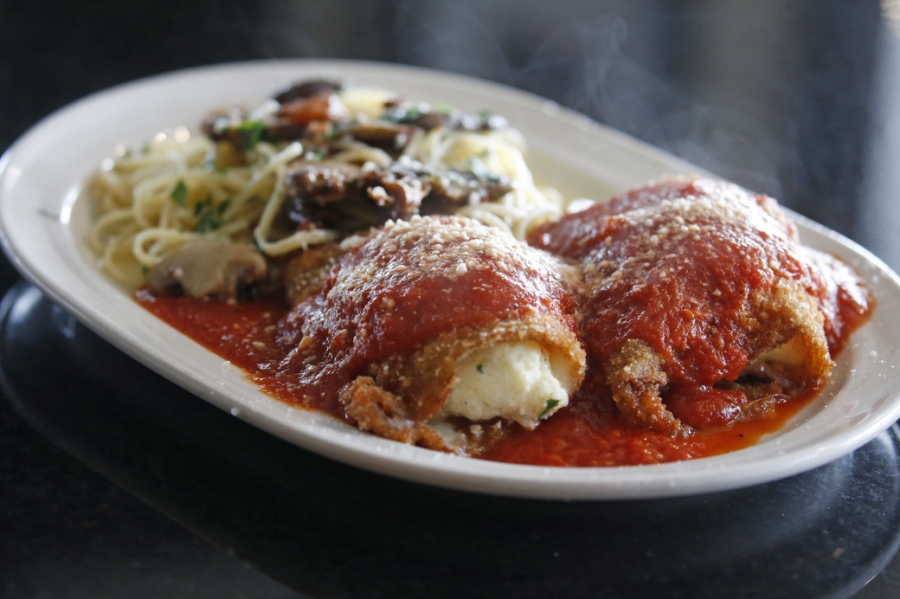 We filled the void, happily, with appetizers such as marinated eggplant salad ($13), which brought slices of piquantly tangy marinated eggplant under a canopy of arugula, seeded cucumbers, tomatoes, onion, kalamata olives, capers and shaved Parmesan.

Calamari ($13) was a golden-brown delight, tender squid rings and tentacles in wispy batter, with dueling dips of tomato sauce and mayonnaise spiked with wasabi. The unadvertised presence of fried chile rings as well gave one heat-avoidant guest an unpleasant moment when mistaken for squid.

A quartet of hot peppers ($14) were roasted al dente, seared in garlic oil and filled halfway with a cheese blend. The unstuffed parts weren’t as nice.

Spurned as a weed, dandelions are adored by many Italians and Greeks. After mowing though a veritable Great Plains of romaine, I’m glad to meet greenery with more character: arugula with attitude. Linguine’s dandelion salad ($12) is a straightforward assembly, a portion of roughly chopped beefy leaves simply dressed in oil and vinegar with tomatoes, olives and shaved Parmesan, whose nuttiness marries well with faintly bitter greens. 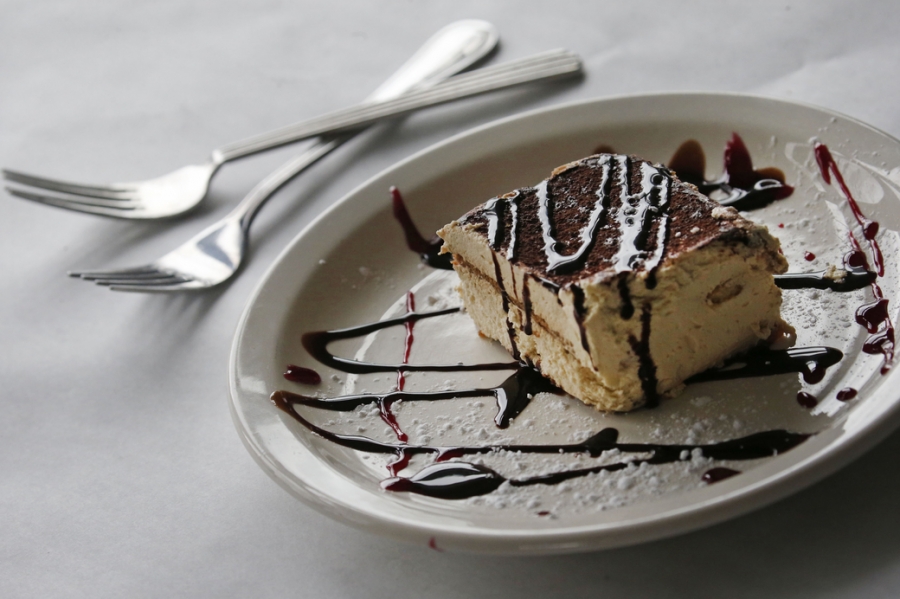 There was a lot of greenery around for a February night in Bowmansville. A shrimp and greens ($26) chalkboard special turned out to be fat shrimp sautéed in wine, oil and garlic, tossed with linguine, olives and broccolini, a robust pasta halfway to a salad.

Linguine’s chicken Milanese ($23) is one of the better versions in town, twin cutlets neatly crumbed and pan-fried to a crisp, adorned with spreadably sweet cloves of roasted garlic and briny capers. They’re heaped on a pile of sautéed greens, heartier than the arugula lemon salad accompaniment favored elsewhere.

Lasagna ($17) was solid, with ground beef and sausage layered between pasta sheets and napped with bright tomato sauce. Gnocchi al romano, in tomato Romano cream ($23), was the comfort food number in the lineup, cheese-enriched pasta pillows in what tasted like a more luxurious version of cream of tomato soup. Its charms included coins of housemade sausage, adding grilled porky goodness to the party.

For me, calamari dandy ($24) was the defining pasta. This sauté used fresh squid to bring tomatoes and olives to the seashore, shot through with more dandelion greens for bite. Its combination of seafood and greenery was a breath of spring amid the snowdrifts.

Notable among desserts were housemade cannoli ($7) with sweetened ricotta piped into anise-scented pizzelle shells, and a properly jiggly panna cotta with fresh strawberries, blueberries and walnuts ($6). Airy tiramisu ($7) won my heart, with its clouds of cream and cookies infused with cinnamon, coffee and chocolate.

Count me among the Linguine’s fans that are glad the restaurant is back. There’s lots of Italian restaurants to choose from, but Linguine’s is where you should go if you’re looking for a real dandy. 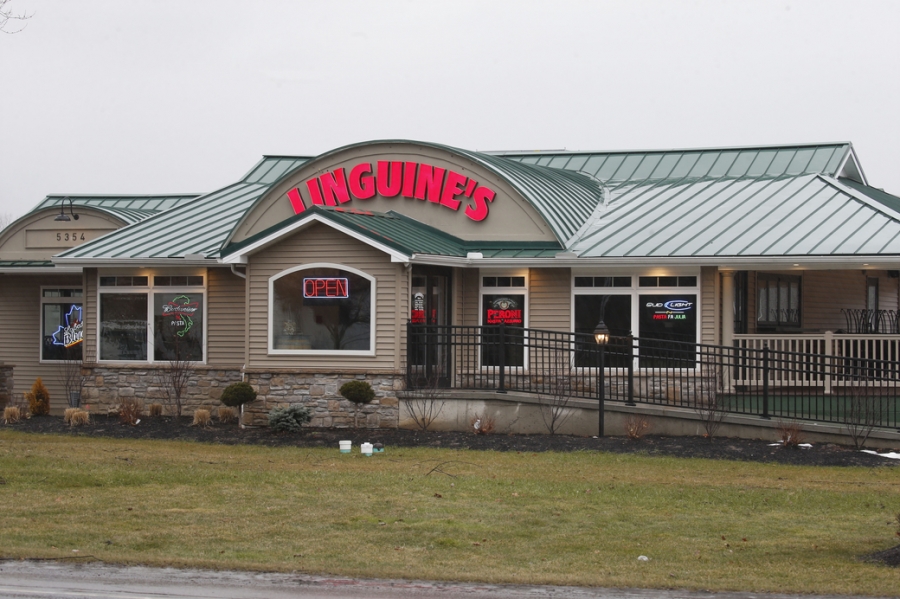