ARLINGTON, Va. — We’ve had nearly no snow hereabouts this winter. That makes me miss Mike McMorrow. He loved a good snowfall.

Mike died in May at the age of 81. He was a South Buffalo guy and the bellwether of our Northern Virginia neighborhood.

Each winter, when it snowed enough to close down the federal government, Mike and Mary Lou McMorrow would throw a spur-of-the-snowy-moment party for their neighbors on North 35th Street. They called these impromptu affairs “Buffalo parties.”

Mary Lou would walk around the neighborhood and leave notes inside the front doors: Party at the McMorrow house. Come when you can. No need to bring anything. You would have nearly no notice, but everyone would come. Where else could we go with the roads unplowed?

We would walk down the street as glistening snow fell in the growing darkness. Mike would greet us at the door with a genial Irish grin. He’d take our coats and pile them high on a bed. Then they would serve hot food and cold beer and warm wishes.

“Have another,” Mike would always say. “You’re not driving.”

Mike was a Bishop Timon guy. And, true to his South Buffalo roots, he was always drawn to the water. Take a look at his photo at the top of this story. Looks like an ancient mariner, doesn’t he?

That’s fitting because Mike was an attorney who served nearly 40 years in the general counsel’s office of the U.S. Maritime Administration. His favorite spot around Washington was the Navy-Merchant Marine Memorial, a waterfront sculpture better known as Waves and Gulls. 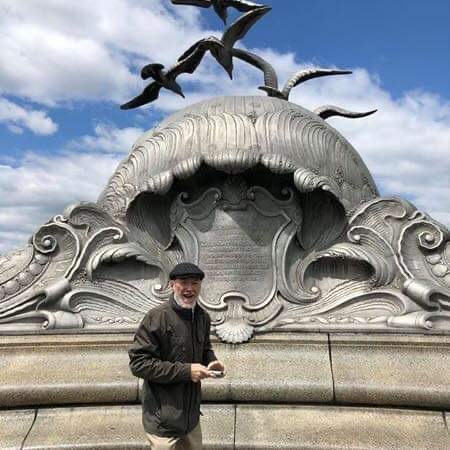 Mike McMorrow at "Waves and Gulls." (Photo courtesy of the McMorrow family)

Mike retired in 2002, though to be fair Mike was not really the retiring type. He would go on to work as a courtroom docent at the U.S. Supreme Court, poll worker at our neighborhood polling place, school bus driver, packer of USO care packages for U.S. military serving overseas, volunteer for the Knights of Columbus and tour guide driver for Old Town Trolley.

He also turned to journalism as a freelancer for weeklies in Northern Virginia. Connection Newspapers noted in an appreciation of his life that he had sent an introductory letter detailing his bona fides as a writer. It listed his education – Canisius College, St. John’s University School of Law – and his work experience. And it offered what he considered his most important titles: father and grandfather.

He appended “more than 30 story ideas that appealed to his interests in history and government,” the newspaper noted. That figures. Making lists was the Mike McMorrow Way.

Here’s how we met: Mike approached me at a coffee-and-doughnuts social following morning Mass at St. Ann’s on the Sunday in 1992 when the Buffalo Bills played Washington in Super Bowl XXVI. I was wearing a ball cap with a stuffed buffalo face protruding from the top. (It’s a conversation starter.)

We immediately talked about our time in Buffalo and soon came upon the realization that he had taken English courses from my father at Canisius.

We weren’t yet neighbors at that point. Years later, when we moved into our new neighborhood, I ran into him while walking Hasek, our English springer spaniel. Days later Mike dropped by our house with a list – of course another list – of the words he had looked up while reading “Stage of Fools,” my father’s 1953 novel of St. Thomas More.

Same-day invitations to those impromptu Buffalo parties began the next winter. Most of Washington dreads even a few inches of snow, as that’s all it takes to shut down the nation’s capital. But here in our neck of the woods we always welcomed a tidy little snowfall, because it so often meant another neighborhood shindig at the McMorrow home.

Once in a while Mike and Mary Lou would throw summer parties, too. One time, in their backyard, we sat and told stories under the stars with Jim Molloy, doorkeeper of the House of Representatives, another Bishop Timon guy who had found his way to the halls of government in Washington.

The last time I saw Mike was about a year ago. I had just retired from USA Today. He knocked on the door and presented me with a yellow legal pad. He wanted me to make a list of all the things I wanted to do in retirement. He said it was important to give it serious thought.

So I did. And one of the things I listed was a hope to write stories for my hometown paper. That’s why I reached out to The Buffalo News. And that’s why you’re reading this now.

I always wondered how he and Mary Lou happened to have all the provisions for all those unplanned parties. Shopping lists? That can’t be it; these parties often came on days when the roads were impassable. Miracle on 35th Street? That might be it; how else to explain how they always had enough on hand for more than two dozen of us?

So I asked him one day how they pulled it off, time after time. Mike’s eyes twinkled as he offered an answer as easy as the freshly fallen snow.

“I’m from South Buffalo,” he said. “We’re always ready for a party.”