Call it luck. Call it skill. Call it a miracle.

Or one can just call it the shot that kept Orchard Park’s championship hopes alive while breaking Clarence’s collective heart. Because that’s exactly what Leah Harrigan’s runner through the lane that beat the clock did Sunday afternoon at Buffalo State Sports Arena.

Orchard Park pulled off a comeback just when it seemed like all was lost, as the Quakers beat Clarence, 56-52, in overtime to win the Section VI Class AA championship before am estimated crowd of 1,500.

Trailing by two with 6.1 seconds left after the Red Devils missed two free throws, OP called timeout. The Quakers set up a play for Harrigan, their 5-foot-4 senior guard, as she drove from the left side, crossed into the lane and when necessity required a shot because of a closing-in defender, she threw up a one-handed prayer.

It was answered, as it found nothing but net, extending OP’s season by 4 minutes.

“I really don’t even remember it and my eyes were basically closed,” said Harrigan, who finished with 10 points. “I just tossed it up to see if I could do anything and then for it to go in, I was so happy.”

So were her teammates, including a couple who earlier had been a little teary-eyed because they thought they were going to lose. Instead, the Quakers captured their second title in three years while preventing Clarence from winning its first since 2017.

“I turned to the bench,” Orchard Park coach Gary Janas said. “I was trying to keep some composure. I knew we had it in us to come back that game.”

“Yeah, we were down (five) at one point, and I personally didn’t even think we’d win the game anymore,” Harrigan said. “I was upset because it was my last high school game.” 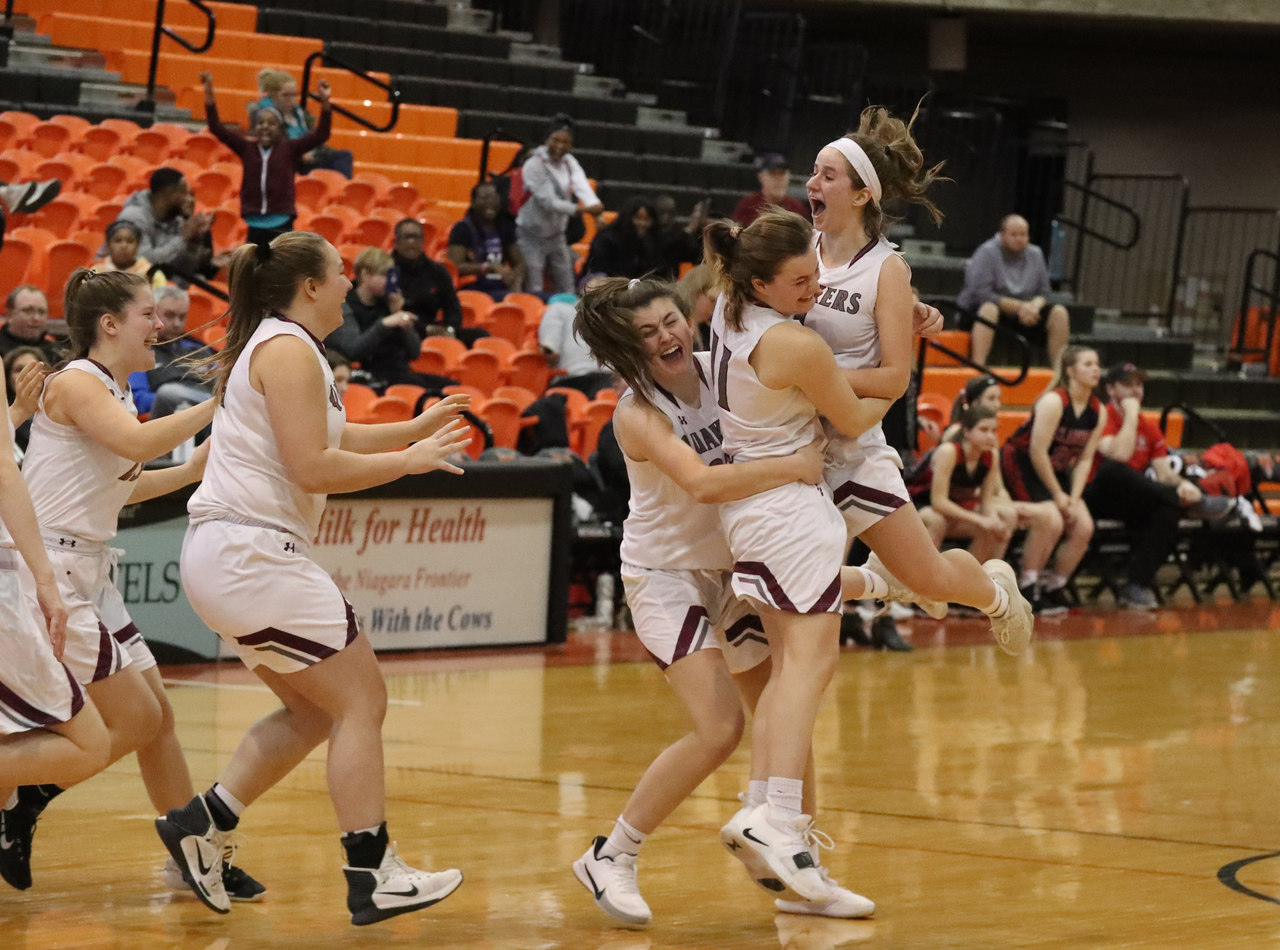 OP (20-3) returns to action at 11 a.m. Saturday at Rush-Henrietta High School against the Section V champion in the Far West Regionals.

Clarence took a 46-41 lead with 17.1 seconds left in regulation on a pair of free throws by Claire Kiener. It was a seemingly comfortable cushion, except it wasn’t. Rachael Major’s traditional 3-point play with 11.3 remaining provided a glimmer of hope. After Clarence missed two free throws, that glimmer became brighter.

When Harrigan made the runner of a lifetime, the Quakers played with a no way they would lose attitude.

“She’s a true leader and motivator,” Janas said. “She saw an opportunity. She hits those floaters all the time. I was just hoping it wouldn’t get blocked.”

“She really came through and hit a one-in-a-million shot,” eighth-grader Sydney Fenn said.

Fenn also came through, pouring in 10 points while filling in for fouled-out sophomore Madison Stevenson. Fenn scored the basket that broke a 52-52 tie with 45 seconds left in overtime. She received a pass underneath and used her 6-1 frame to get into position for a layup over a smaller defender.

Lily Flannery led the Quakers with 13 points, while Stevenson had 10. Kiener finished with a game-high 25 to lead the Red Devils (12-11).

“They played hard. They played hard for four quarters,” Clarence coach Erin Booker said. “We just didn’t capitalize when Stevenson and (Ali) Miller were out of the game (for Orchard Park).”

“It’s just mind blowing,” Fenn said. “We worked hard for this all season.”