Naming a school, park or building after someone is often done posthumously, or at least after a person has left office.

Firebrand political figure James D. "Jimmy" Griffin, for instance, was elected to four terms as Buffalo mayor, serving from 1978 to 1993. But it wasn't until four years after he died in 2008, at the age of 78, that a life-size bronze statue of him was unveiled in the plaza that had been named in his honor in 2009 near the gates of Sahlen Field downtown.

Pioneering politician Arthur O. Eve took office as a state assemblyman in 1967. He was deputy speaker from 1979 until he retired in 2002 and spearheaded efforts to help more residents attend college. But it wasn't until 2014 that the University at Buffalo dedicated its Educational Opportunity Center on Ellicott Street in Eve's name, and the following year when he attended the renaming of School 61 in his honor.

That's the sentiment of a group of Masten District business leaders, educators, block club presidents and entrepreneurs that has initiated a "grassroots community campaign" to have the Delavan-Grider Community Center renamed the Byron W. Brown Community Center. The 16-member committee says the honor would recognize Brown for his impact on Buffalo and his accomplishments, including his efforts to get the center built.

"They're looking to ... me to ensure that we memorialize his name by putting it on that hub in our community that represents peace, hope, love and prosperity," Council Member Ulysees O. Wingo said of the committee during a recent Council meeting. Wingo currently represents Masten, where the community center that opened in 2000 is located.

"What resonated with me is the fact that they let me know in no uncertain terms that the reason they would like to see this is because they understand – their words – that the sun may be setting on them, and they want to make sure they honor him" in their lifetime, Wingo continued.

"Tomorrow is not promised to me. ... I'm getting older now ... and I would love to see this done before I'm gone," said 75-year-old Charlene Caver Miller.  "At age 75, there's no sense sitting around thinking about it ... because you got to get it rolling, and it's long overdue.

"All the accomplishment that this young man has done in this city, we need to honor. If we as a people don't start honoring our people and putting their names where they belong, we'll be lost." 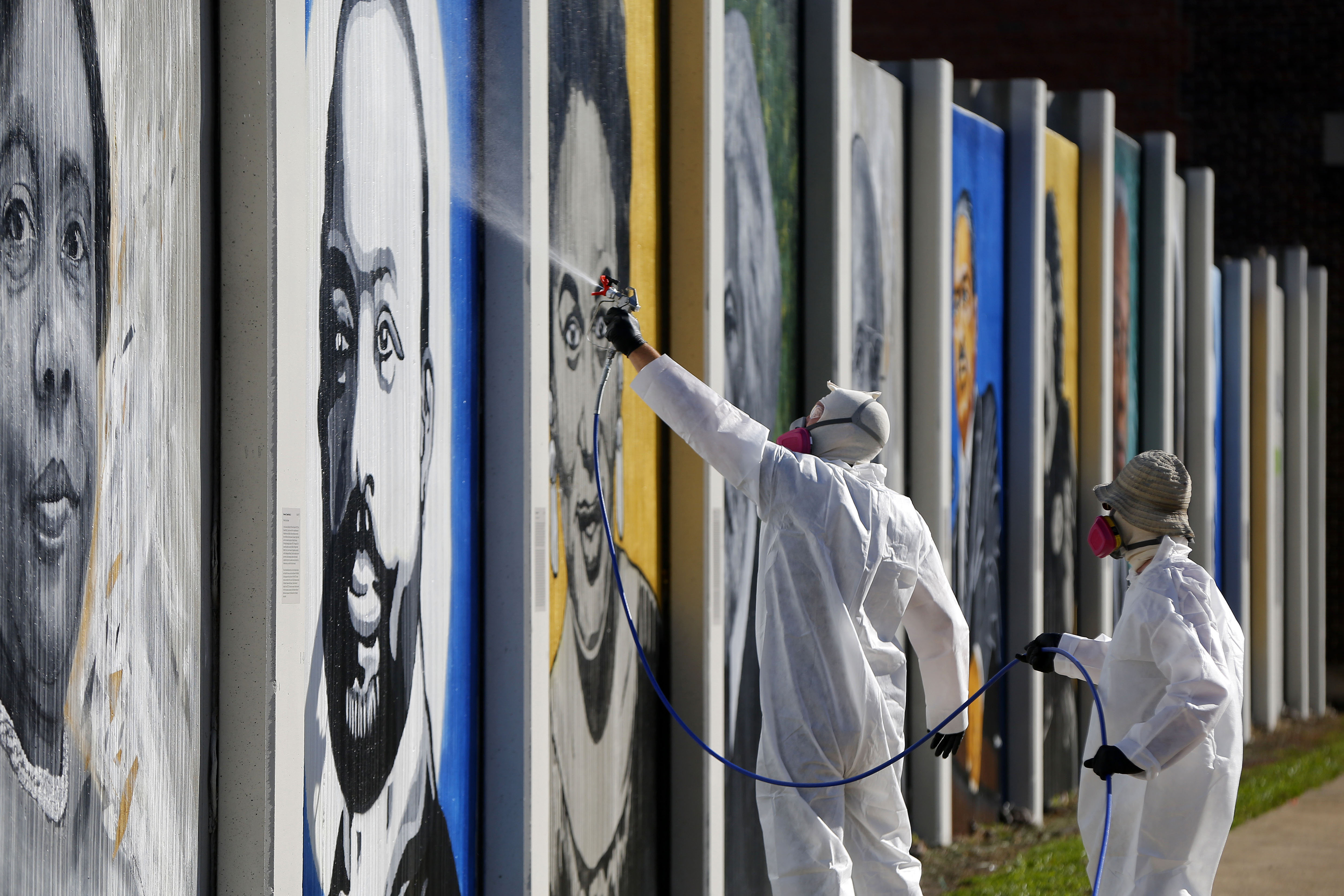 Zack Boehker, left, and Scott Bye, right, from the Albright-Knox work on the Freedom Wall in 2017, a public art project at East Ferry and Michigan Avenue. (Mark Mulville/Buffalo News)

Caver Miller's likeness on the Freedom Wall, a giant outdoor mural featuring 28 local and national civil rights leaders at East Ferry Street and Michigan Avenue, is accompanied by text that calls her "a powerhouse of community service in Buffalo" and cites her many volunteer activities.

Renaming the community center was her idea. She had been thinking about it for at least a year before she approached Wingo in November or December, she said. She then worked with block club leaders and "my elders older than me" to set up community meetings to gauge support.

One of the supporters is Cynthia Russell, a Buffalo native and owner of Cyn's Heavenly Angels Day Care on Wyoming Avenue for 20 years. Russell, 62, said she doesn't understand why there would be a delay.

"Why not now?" she said. "I think he deserves it. He's always giving out roses and awards and keys to the city to everybody else. Why shouldn't he be honored?"

"Take a look at our city," Russell continued. "It's come such a long way. When I go downtown, I'm amazed at the things I see and can do. He's done improvements all throughout the city. I love what he's doing. ... That community center ought to renamed for him because he's all about the community."

Wingo, who emphasized that renaming the center was not his idea, said he reached out to the other Council members after he was approached and that they all "signed on." But he also alluded to the possibility that all of the public may not be on board with the idea.

"Prayerfully, the pushback isn't too much unbearable," he said during the Council meeting.

Brown, 61, represented Masten on the Council from 1996 to 2000. He left in the middle of his third term after being elected to the New York State Senate, where he served five years before being elected mayor in 2005.

As a Council member, Brown championed the building of the community center and set aside money in the capital budget over the years to pay for its construction. Wingo said Brown's efforts ensured that "children have somewhere to go to play," that "seniors have somewhere to go to congregate" and "that there was a safe space that people could come together in the City of Buffalo."

There is no word from Brown so far on what he thinks about renaming the center in his honor.

According to its website, the center offers after school programs, summer camps, free counseling for youth and families, activities for seniors and an Erie County Stay Fit Dining site.

The Council will hold a public hearing on the renaming at 2 p.m. March 17 in Council chambers on the 13th floor of City Hall.