It has already infested southeast Pennsylvania and is moving west.

“What’s happening in the vineyards in Pennsylvania is the spotted lanternflies congregate, eat plant sap and secrete a sticky substance,” said Sharon Bachman of the Cornell Cooperative Extension. “It’s a nasty mess and it’s putting wineries in Berks County out of business.”

Experts worry it is only a matter of time before the pest strikes here, much like the emerald ash borer, and the Asian beetle before that.

Dead lanternflies were discovered at two locations in Erie County, including Eden last summer, Bachman said. They were also discovered on the New-York New Jersey border and in New York City.

“Our biggest concern is the fruit growers in New York," said Ethan Angell, state horticulture inspector for the Department of Agriculture and Markets. "Of those, we are particularly concerned about our grape growers because of the crop loss we are seeing in southeast Pennsylvania."

The invasive insect, about the size of a quarter, was first detected in 2014 in Berks County, Pa. It has spread to parts of New Jersey, Delaware, Maryland and Virginia.

Pennsylvania earlier this week expanded a truck quarantine to two of its western counties, Allegheny and Beaver, as it works to stop the spread of the pest.

In New York, statewide inspections began in 2018 at checkpoints along main transportation corridors, population centers and rail yards through the lower Hudson Valley and in Long Island, as well as in Buffalo, Rochester, Syracuse, Albany and Binghamton, Angell said.

The spotted lanternfly has two pairs of red and yellow wings, but jumps more than it flies, Bachman said. Indigenous to parts of China, India, Vietnam and eastern Asia, it was first identified in Berks County in shrink-wrapped shipments of stone countertops in 2014, she added. 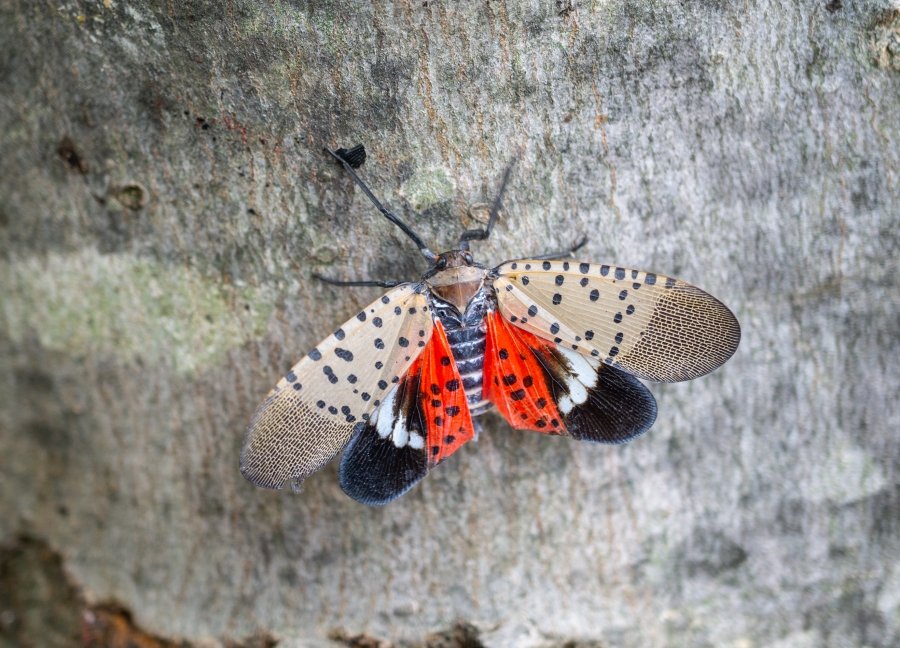 The spotted lanternfly is an invasive Asian pest that has devastated vineyards in Pennsylvania. (Photo provided by state Department of Agriculture and Markets)

“This bug is beautiful,” Bachman said. “When it opens its wings with the red and yellow, wow – you can’t miss it.”

According to Bachman, the expansion to the Pittsburgh area of Pennsylvania is a developing story.

“With any invasive pest, there is good news and bad news," Bachman said. "It’s not the same story as the emerald ash borer. The borer had that very specific host plant, which helped us detect it. This one has a wider variety.”

Tree-of-heaven is the lanternfly's favored host, according to experts. It also likes black walnut, maple and oak trees, as well as Christmas trees, vineyards and apple orchards, Bachman added.

“With vineyards, if it doesn’t kill the plant, it affects the flavor of the grape," Bachman said. "That’s the same as killing your plant if you can’t market your product. What they’re noticing in Pennsylvania is that it’s giving grapes an off-taste during harvest. Locally, it’s more the grapes that is the concern, and it doesn’t matter if it’s wine or fresh juice.”

Peter Smith is a third-generation viticulturist in Niagara County. He grows 110 acres of grapes, including steuben, vidal blanc, GR7, and vetrilai. Concord and Niagara grapes are used for wine and juice, Smith said.

“My grandfather started it in 1930, and I’m still here, though my father and I have significantly expanded it since,” Smith said. “About 75 percent of my grapes go to Welch’s National Grape and the other 25 percent come here to Niagara Landing.”

Smith said his winery has known about the lanternfly for a year, but has not had any problems with it.

"In all honesty, I have not put it that high on my radar screen yet because it hasn’t been an issue, but it’s coming,” Smith said. "The best thing we can do is go out there and scout our vineyards –walking through, ruffling the leaves. We do that normally for leaf hoppers, Japanese beetles. This is a new bug.”

Smith recalls when the ash borer was seemingly unstoppable at killing trees. He sees a difference with the latest threat.

“We knew for years the ash borer was coming, and now we have dead ash trees all over the place,” Smith said. “What’s different is that orchards and vineyards are usually already sprayed, where poor old ash trees are out in the woods.”

An estimated 24.4 million ash trees – roughly 20 percent of the county’s total tree population – were killed by the ash borer, the Department of Environmental Conservation reported. And the ash population continues to decrease rapidly.

Angell, the horticulture inspector, was also in charge of the ash borer regulatory program from 2009 to 2018.

“We started looking for the emerald ash borer in 2004. Unfortunately not too many communities were proactive,” Angell said. “EAB was not easily visible underneath the tree bark. By the time you see the woodpeckers and malformed tree crown, it was five years into infestation.

“This insect is so highly identifiable. When you see it, you’re able to recognize it.”