A new pizza collaboration between Macy's Place and Toutant, two of Buffalo's most creative and social savvy restaurants, gives local eaters every reason to be excited for what's to come.

The Nashville hot chicken pizza, the brainchild of the buzzy Cheektowaga pizzeria and the highly rated Southern restaurant downtown, met its maximum of 100 pre-orders, for service March 10, in less than 24 hours.

A portion of the proceeds for the specialty pies ($19.99 for a small and $25.99 for a large) will be donated to the Community Foundation of Middle Tennessee, which is helping the Nashville area recover from a deadly tornado.

Although orders for full pies are closed, both Nick Argy, owner of Macy's Place, and James Roberts, chef/owner of Toutant,  hope to prepare enough to sell individual slices for as long as they can on March 10 at the pizzeria (3348 Genesee St., Cheektowaga). Given the initial response, these slices won't be easy to snag.

"It's literally just fun for us," Roberts said of the project. "We're just having a good time, enjoying what we do." 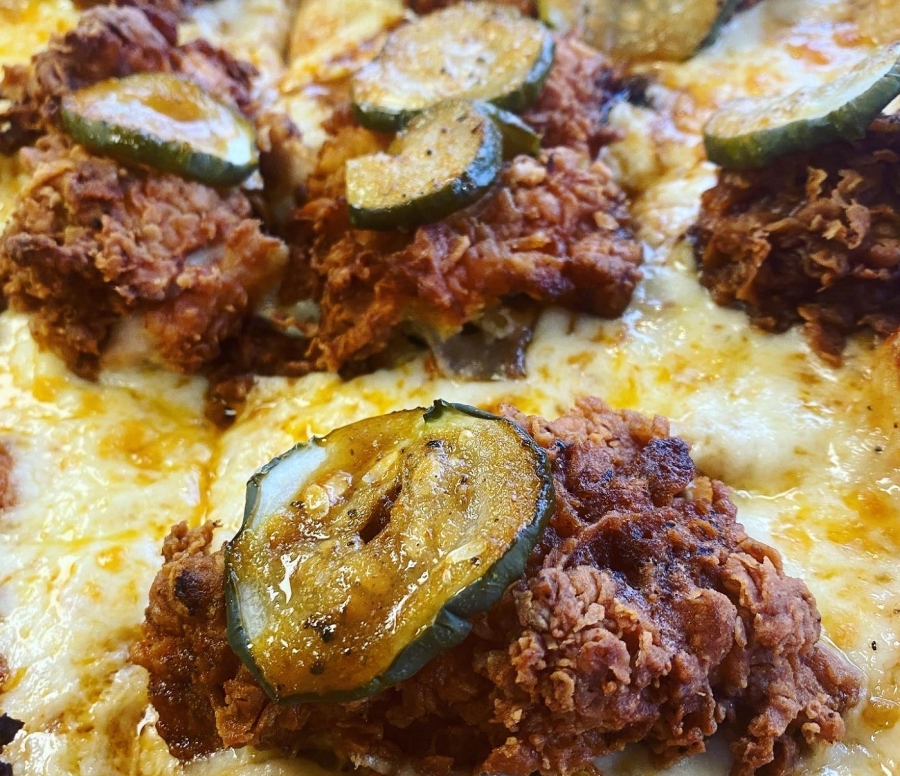 An even closer look at the Macy's Place, Toutant joint effort, the Nashville hot chicken pizza. (via Macy's Place)

The unexpected demand – Roberts initially planned for maybe 20 pies, Argy recalled – has both parties scrambling with Argy concerned how to balance regular business with the pre-order traffic, and Roberts estimating 100 pounds of chicken and 4 gallons of pickles, as well as budgeting time for cooking down the secret sauce and double-battering and pressure-frying the birds.

"Obviously my spot is only so big, and we’d love to do more but we want to protect the integrity of the product and do it right," Argy said. "We’re looking to get through this first run and see how it goes."

Thanks in part to Argy's alluring, over-the-top Macy's Place Instagram account, which rapidly approaches 10,000 followers, Roberts, his wife, Connie, and their kids had become fans, ordering from the Cheektowaga pizzeria regularly and developing a particular soft spot for the chicken finger and burrata pie.

Roberts, impressed one day by Macy's calzone flip pizza, reached out about a potential joint effort with Argy, who then stopped into Toutant and tried Roberts' Nashville hot chicken, once a late-night sensation that's become the Ellicott Street restaurant's "trademark," the chef-owner said.

"[The sandwich] has every flavor [people] like – savory, sweet and spicy – and it utilizes everything Toutant does, from the secret sauce to making our own pickles," Roberts said.

The interest in the Nashville hot chicken pizza now has Argy's mind churning with future collaboration ideas for this spring and summer, including a potential pickle pizza with Barrel + Brine, the fermenting stars of Chandler Street.

Toutant's chef-owner doesn't want to be forgotten in the future, either.

"I don't think this is the last time you'll see Macy's Place and Toutant working together," Roberts teased.