Prosecutors plan to ask a judge to revoke the pistol permit of the Lockport man convicted Friday of misdemeanor menacing but acquitted of all other charges, including two hate crimes, in connection with a traffic accident in North Buffalo.

An Erie County Court jury found Jeffrey L. Calhoun — who was accused of using a racial slur and brandishing a pistol during a physical confrontation with a black woman on Colvin Avenue —  not guilty of four felonies.

Calhoun faces up to a year in jail when he is sentenced by State Supreme Court Justice Christopher J. Burns on May 26.

"They will request the judge revoke his permit at sentencing," Kait Munro, spokeswoman for the Erie County District Attorney's Office, said of Calhoun's pistol permit.

Calhoun, who is white, was indicted in August on the hate crimes and other charges. On the witness stand, he denied using a racial slur during the incident on Colvin near Sanders Road on July 19, 2019.

"The jury was very diligent. They were very dedicated. They were very thorough in their work and they came back with a decision that appears to be a fair decision based on everything," Daniel J. Henry Jr., Calhoun's defense attorney, said. "And Mr. Calhoun is very relieved that this is over. He's a very good person – very good – good family, a good community person and he's very relieved that this is over."

"But never, ever did he intend to use that or to harm anyone," Henry said.

Here is attorney Daniel Henry Jr., left, and Jeffrey Calhoun after the verdict was announced: pic.twitter.com/xYdPshgtSW

He said he believed the racial motive was shown not simply with the allegation a racial slur was used, but also in Calhoun trying to keep her at the scene because he thought she was fleeing because she didn't have insurance for her vehicle.

"And do you think she doesn't have insurance just because she was black?" Flynn said. "That was the lens that I was looking at it from."

Flynn also said it would be unfair to conclude that the jury didn't believe the victim and believed the defendant.

"I don't think it's that simple," he said. "I think that obviously the jury didn't believe her beyond a reasonable doubt. And that's the difference here."

Flynn said he believed the victim's story and pursued the case, even though he knew it was going to be a tough one to make.

The hate crime charges were the first brought by the District Attorney's Office since Flynn became the county's top prosecutor in 2017.

The victim, Jeanneie Muhammad, 54, testified she thought she could get shot during the incident, much of which was captured on cellphone video by a bystander. The video was shown to the jury several times during the trial.

Testimony in the trial began Tuesday morning and the jury of eight women and four men began deliberating Wednesday afternoon.

Prosecutors described Calhoun as "dripping with anger" after his pickup was rear-ended. They argued his response was disproportionate to the "fender bender" that occurred and that Calhoun must have been motivated by racial animus because there was no other possible reason for it.

Justin T. Wallens and Sean B. Bunny, the assistant district attorneys who prosecuted the case, alleged Calhoun told Muhammad when he first approached her vehicle he thought she probably didn't have any insurance for the car she was driving that day. 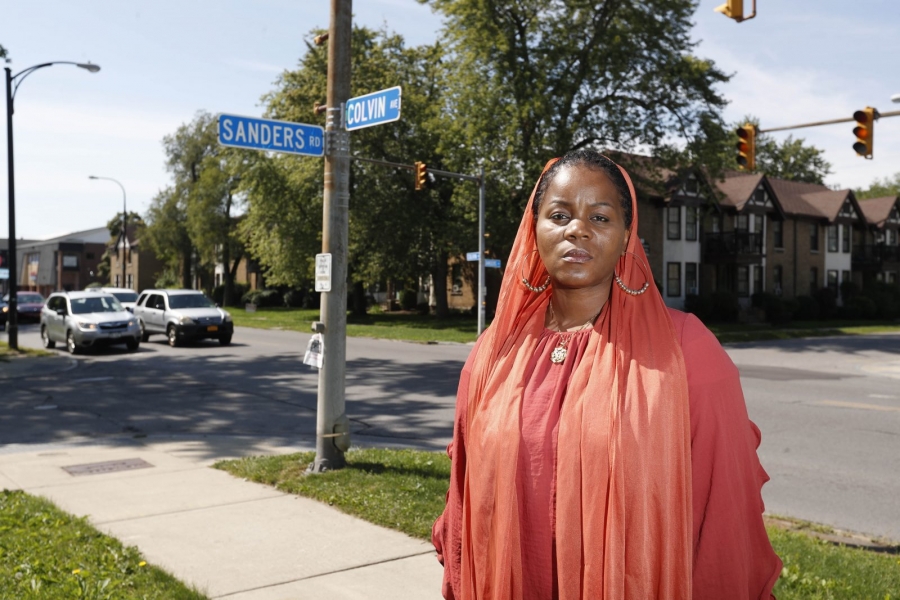 Calhoun, who has a pistol permit that legally allows him to carry a concealed firearm, testified he pulled Muhammad's keys from her car's ignition because he believed she may try to leave the scene. He grabbed onto her purse because he said he wanted to hold her there until police arrived. He also told the jury he became scared for his life when several other people gathered around him and Muhammad, some were yelling at him and he was punched in the face.

He said he removed his gun from its holster because he felt something hit it and he thought someone may try to grab it from him. He never "pointed" the gun at anyone, but was merely showing it to those gathered, he told the jury.

Muhammad had a suspended driver's license at the time of the incident. She was driving a car registered to her husband and the vehicle was insured.