Five hard steps, full throwing motion on the ice, then seek your balance.

Cliff Brooks III was simply hoping for that old rhythm last month at a snow snake tournament on Oldro Hill Road, deep in the Pine Hill Forest near Randolph, in Cattaraugus County. He was far less concerned about winning than about finding something on that hilltop he had lost long ago, which seemed just as well when Brooks saw how Ryan John started out.

They were both raised on the Seneca Nation. John was throwing the wooden snake – shooting it, as they say within the Six Nations – for a team called Kabbage Korners, and he was on a hot streak that threatened to end the game not long after it began.

Snow snake is an ancient winter sport played throughout the territories of the Haudenosaunee, or Six Nations, in upstate New York and Canada. It involves hurling lead-tipped, javelinlike pieces of wood, at least 6 feet long or more, along a handmade track of snow such as the one at Oldro Hill, which runs slightly uphill for hundreds of yards.

Many players showed up with cloth bags of snakes – some in their families for generations – at a tournament named for Morrie Abrams, a Seneca who nurtured snow snake until his death 21 months ago. Abrams wanted native children to fall in love with a game the Haudenosaunee have embraced and sheltered for generations, keeping it from "being colonized," as Vern Longboat, a competitor, described it at the tournament.

With that understanding, organizers were happy to provide an overview of the deep roots of the connection. John, for instance, learned to "shoot" when he was in kindergarten, after his dad built a track at their Cattaraugus home. Sixteen years later, he wears cleats to better handle the ice beneath his feet, because throwers have been hurt when they sometimes tumble after letting go. 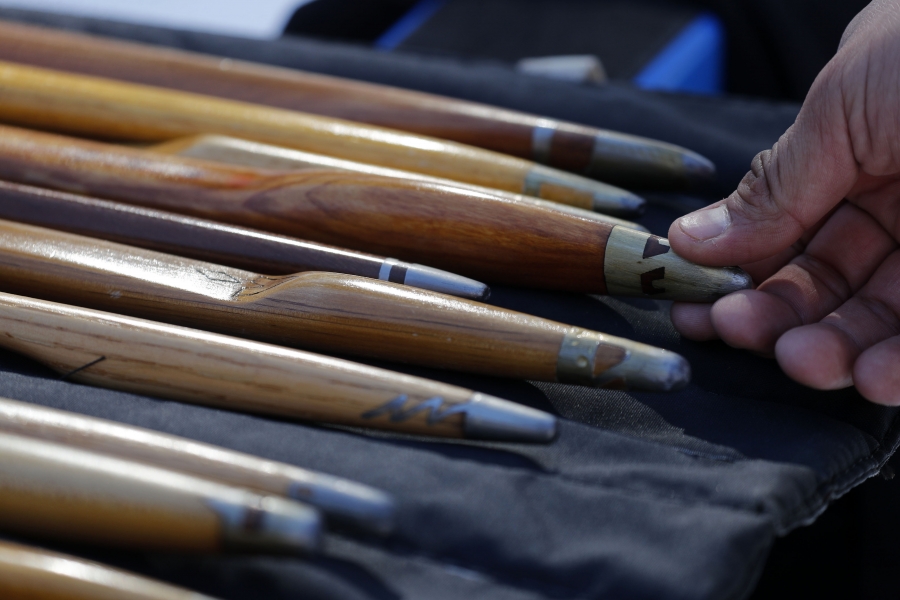 Jake George looks through his snow snakes before the tournament at Pine Hills State Forest in Cattaraugus County on Feb. 22, 2020. (Mark Mulville/Buffalo News)

You know a good throw, John and Brooks agreed, if you hear nothing at the instant of release. An errant shot can "rattle around" or get jammed in the chute, forcing the shooter to dig out his snake and carefully pat down the snow for the next guy.

Done well, the snake moves so fast it appears to writhe, the phenomenon that gives the sport its name. Along the track, men from different teams serve as "markers," using small sticks protruding from their boots as a way to mark off where each throw stops.

As a snake speeds toward them, the urgency of their voices tells a faraway thrower how he has done.

“Get up here!” they call out, if they are on a thrower's team. Opponents who hope the snake will stop shout "Whoa!" or other commands to discourage it, all part of the Haudenosaunee belief at the heart of the game:

Each snake is alive. Each one carries the conscious spirit of the maple or apple or whatever tree from which it was carved, as well as living resonance from any hand that ever touched it.

For that reason, competitors believe if you call to a snake with enough passion, it will respond.

Certainly, that was part of what brought Brooks to the tournament at Oldro Hill with a few of his dad's old snakes. Within the Six Nations, snow snake is a men's game. The tournament was divided into children’s categories, an adult contest with mudcats – a much smaller kind of snake – and three different levels of full snow snake competition. 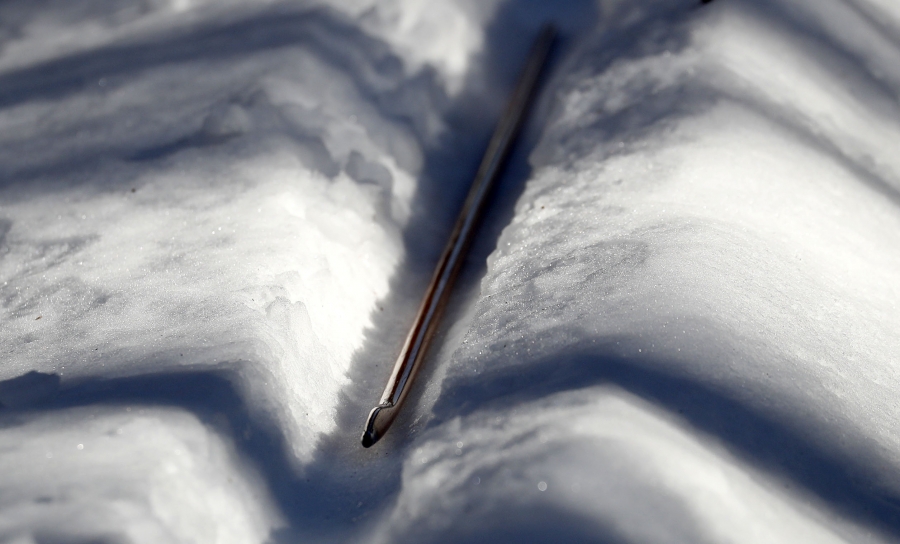 A snow snake in the chute at the Morrie Abrams tournament. (Mark Mulville/Buffalo News)

Players arrived from as far away as the Onondaga Nation, near Syracuse, and from Six Nations territory in Ontario. Shannon Booth, an Onondaga, said weekend gatherings for snow snake sustain important bonds between different nations, "relationships that have gone on for generations." The Senecas provide a frequent stop, since the Allegany foothills can hold snow well into the spring.

The snakes themselves are part of the lineage. Steve Frank, 60, a Seneca who manages both the tourney and the Onoville team, has a stick – easily more than a century old – that he traces to his great-grandfather. He was patient and welcoming to a visitor, expressing gratitude to the Seneca Nation for sponsoring the tournament and sharing what he could about a native game free of scoreboards or weigh-ins or electronic technology, played with unwritten rules everyone understands.

For Brooks, the tournament served as a kind of homecoming. His grandfather, Clifford Brooks Jr., was a snow snake legend at the Allegany territory. Cliff III remembers him in his later years, even then almost always with a snake in his hand.

He became a "shiner," the grandson said, a key member of any team. Older men long past their throwing days will bring home snakes to work on during the week, often using steel wool or sandpaper to hone the wood. They routinely apply homemade wax – particular varieties are well-kept family secrets – in order to make a stick fly faster in the chute.

They wait in the cold for hours, every weekend, to see how their snakes perform.

Until his death, that was the passion of Cliff Brooks Jr. He taught those rituals to his son Dennis, who named Cliff III in honor of his grandfather. Dennis was soon bringing the little boy to snow snake, a tradition that promised to go on in one long, unbroken line. 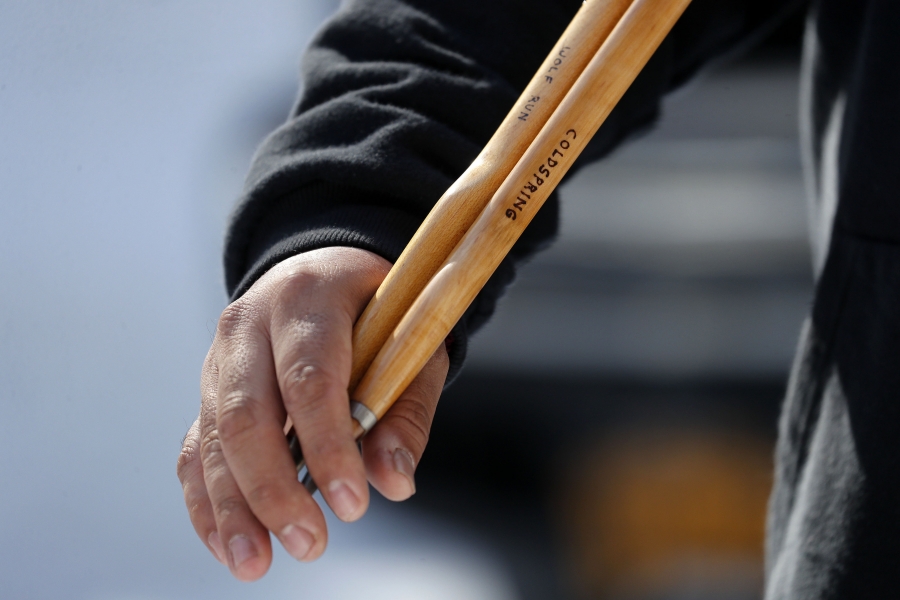 Gonio Miller holds two snow snakes – one marked with the name of the Cold Spring corner, or team – during a tournament on Oldro Hill in Cattaraugus County. (Mark Mulville/Buffalo News)

Everything changed. Dennis Brooks died at 42 of a massive heart attack when his son was only 12, part of a chain of family grief. “I felt like I lost the men who took me there,” said Cliff III, speaking of snow snake without his dad, his grandfather and his uncles. With all of them gone, for more than a decade, he could not bring himself to play.

He is now 24, an operating engineer who works in Buffalo. It was only in the last year or so that his close friend and mentor, Gonio Miller, convinced him to try again. Miller, 34, found his way to the game through Morrie Abrams, who asked him to help one year in the hard work of building the track. The daylong communion of that effort in the woods was a reminder of what snow snake really means.

Miller revived a dormant team – or "corner" – called Cold Spring, organized long ago on lands now flooded by the Kinzua Dam, after receiving permission from several families that once had been involved. It seemed fitting that one of the first players should be a young protégé with a deep lineage in snow snake.

At the tournament, after three rounds in the third division, they were prepared for a quick exit. John was only one throw away from the win and the tournament payoff, which triggered the heckling that is an acceptable and celebrated part of the game: Opponents can shout at a thrower, doing anything to distract him short of touching him, and John knew his quick start would bring him the full treatment. 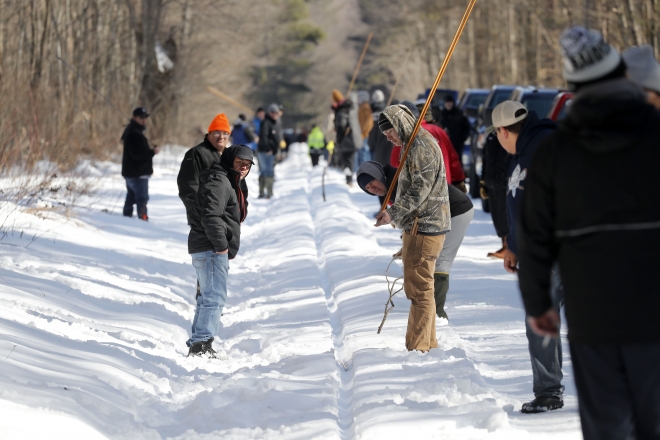 Markers watch a snow snake travel through the track during the tournament at Pine Hills State Forest in Cattaraugus County. (Mark Mulville/Buffalo News)

Indeed, on his fourth throw, a guy in an SUV blared his horn just as John released, triggering quiet laughter from the line of men along the track.

For Brooks, it was as if a familiar memory kicked in. He started "crushing it," as Miller described it. Before long, Brooks had also managed to win three rounds, a joyous rhythm that left him in what amounted to a tie with John. But the afternoon sun was dropping toward the trees, and a game that began in morning was not so far from dusk.

Frank, as tournament host, made a decision.

It was time for sudden death. 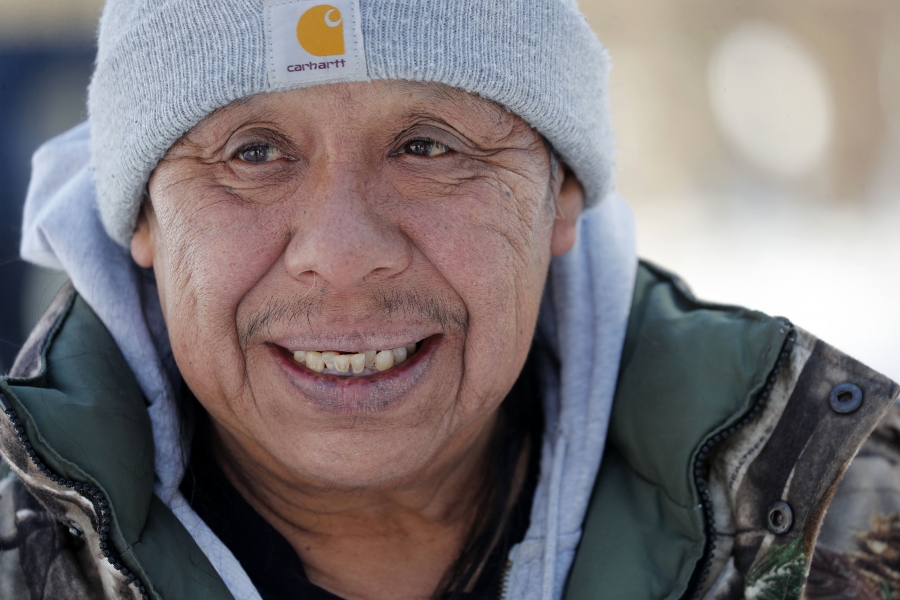 Allen George reflects on his passion for snow snake during a tournament on Oldro Hill in Cattaraugus County. (Mark Mulville/Buffalo News)

One best throw in one final round would win the whole thing. Along the track – where many older men sat in lawn chairs, seemingly oblivious to the cold – the "markers" doubled their focus on the game, believing shouts of passion might somehow compel the snakes.

Allen George and his son Jake, watching as they tinkered with a rack of mudcats, said there is no doubt about the idea that each one holds a spirit. The snakes had delicate markings that determined ownership. Several of the mudcats carried the distinct patterns of a longtime teammate who died not so long ago.

The Georges still bring them to each game, even if they do not use them.

The snakes need to be there, they explained. They should not be locked up at home.

Adrian Stevens, another shiner, said the presence of the crowd of young men – snow snakes casually balanced against their shoulders – gives him hope about the future. Many Seneca teenagers, drawn in high school to other sports, seem to be coming back to the cultural integrity of a game the Haudenosaunee revere. 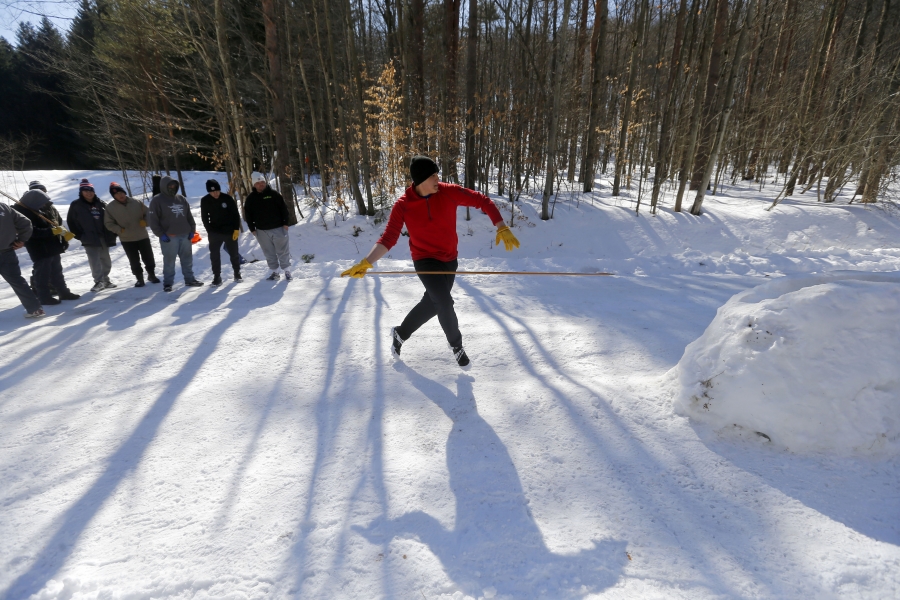 Longboat, a Seneca who grew up at the Six Nations territory in Ontario, said the earliest snakes served as a way for villages to communicate in winter, before that practice evolved into a form of competition and release during long winters.

The tournament is part of that ongoing tradition. In the end, in sudden death in the third tier, John ignored noisy jokes and beeping horns to come up with the longest throw, meaning his entire team shared about $400 of tournament winnings. Brooks was more than content to finish second, an accomplishment he saw as a means of thanks to the father, grandfather and uncles who taught him the game.

"I know they were there,” he said of what he felt all day, on Oldro Hill.