The sky isn’t falling on the New York State Medicaid system, despite what you might hear about the $2.5 billion cut Gov. Andrew M. Cuomo seeks in the health program to help close a $6.1 billion gap in his proposed $178 billion budget.

The aim is to trim a spending increase for the coming fiscal year to 3%, instead of the estimated 6.7% increase if the program continues to operate as is.

“There's more than enough overspending you could squeeze out given the proper time and the proper political mandate,” said Bill Hammond, director of health policy research with the Empire Center, a conservative research group that reports on state finances.

There are good reasons cuts in the state program send shivers through at least one of every three New Yorkers. They rely on Medicaid to pay their health costs. Program efficiency also should concern the other two of every three state residents who pay a sizable share of their state and federal taxes to support the $75 billion state program.

“We have to focus on the areas that have the highest spending growth to see what's happening there,” State Budget Director Robert Mujica said. “Are there programmatic changes that we can make that are consistent with the goal of providing high-quality health care to people that need it the most, while being able to control the costs?”

Several state health experts, as well as a medical practice bent on reforming health care for thousands of Medicaid patients in Buffalo, say the governor and state lawmakers have several obvious places to control spending growth – but they will come with political and patient pushback, including from powerful health care interest groups.

Here's a look at nine ideas that have been talked about publicly, in order of their likely implementation. 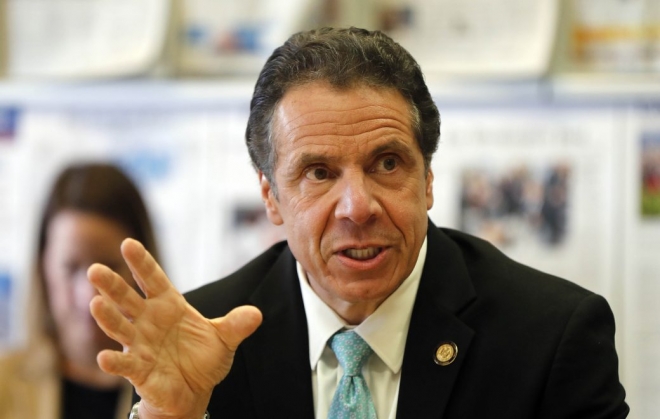 Medicaid, established in 1965, is funded by the federal government and each state. It covers 6.3 million New Yorkers, including low-income adults and children. It pays for half of all births in the state and helps two of three people in long-term care.

States have discretion, within guidelines, to determine who is eligible and what benefits they receive. New York provides one of the most generous programs in the nation, covering eyeglasses, dental care, lab and X-ray services, medical equipment, transportation and other services not always included in other state plans.

The governor has appointed a Medicaid Redesign Team to look for the $2.5 billion in savings from about $20 billion the state spends each year under a "global" Medicaid cap, which makes up about 80% of the state share of its Medicaid program. Its members expect to meet for the last time on Tuesday and release recommendations within a few days after that.

Hammond hopes a higher tax on health insurance won’t be proposed, but fears it will. The average family already pays $1,000 in state taxes on health insurance, he said, and most don’t know this because it’s usually picked up by employers.

One place savings could come from, according to Hammond and other health leaders, is the Consumer Directed Personal Assistance Program, which allows recipients, including some household members, to get trained and become home health care providers. The idea was to lower the cost of more expensive nursing home care.

New York accounted for 40% of nationwide personal care spending in the Medicaid program by 2016 – and Mujica said the personal assistance program is projected to grow by 800% between then and next year. It’s expected to cost $2.8 billion alone in the new fiscal year, which starts April 1.

State Comptroller Thomas P. DiNapoli said his auditors have uncovered billions of dollars in waste, fraud and abuse in the Medicaid program, including $1.28 billion in premiums the state paid in error over 5½ years, through September 2017, to those who had health insurance that should have covered those costs.

He also recently announced the results of four audits that identified $790 million in savings that could have come from eliminating other unnecessary payments and collecting rebates from drugmakers. 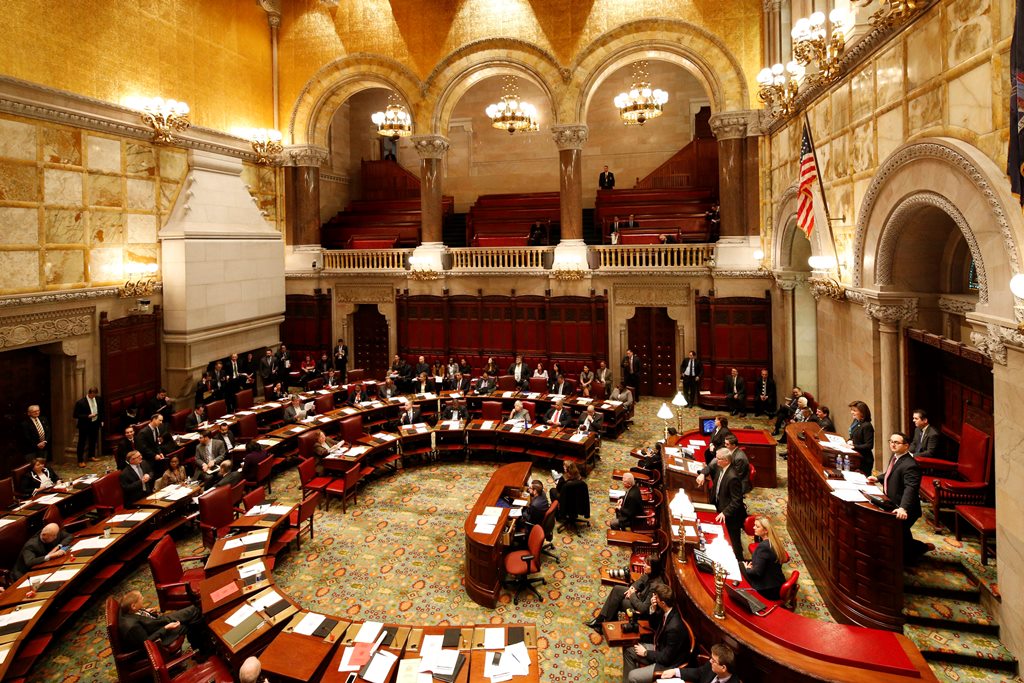 A State Legislature decision to exempt the $15-per-hour minimum wage and a Cuomo administration decision to carry over $1.7 billion in Medicaid spending from the 2018-19 fiscal year into the current budget have blunted the impact on a spending cap recommended by a 2011 Medicaid Redesign Team. (Derek Gee/News file photo)

Cuomo created his first Medicaid Redesign Team early in his first term in 2011, when his administration faced a $10 billion budget hole.

The panel made 79 recommendations, most of which were implemented. The Affordable Care Act, also known as Obamacare, helped add 2 million more uninsured and underinsured New Yorkers to Medicaid by 2016 but per-recipient spending – a key indicator of efficiency – declined by $1,200, or 11%, during that time, Hammond said.

Things changed in 2016, when the governor and state lawmakers started to make changes that hampered the global Medicaid spending cap, which is tied to the Consumer Price Index.

The Empire Center last fall recommended closing loopholes that include forbidding delayed payments like one last year in which the Cuomo administration pushed more than $1.7 billion worth of Medicaid expenses into this fiscal year.

State Sen. Gustavo Rivera and Assemblyman Richard Gottfried, chairs respectively of the Senate and Assembly health committees, support re-examining the cap – but advocate a higher billionaire and super-millionaire tax if it means a choice between cost-cutting and the needs of a growing number of older state residents. The administration opposes that idea in a state that already has the second-highest such tax in the U.S. 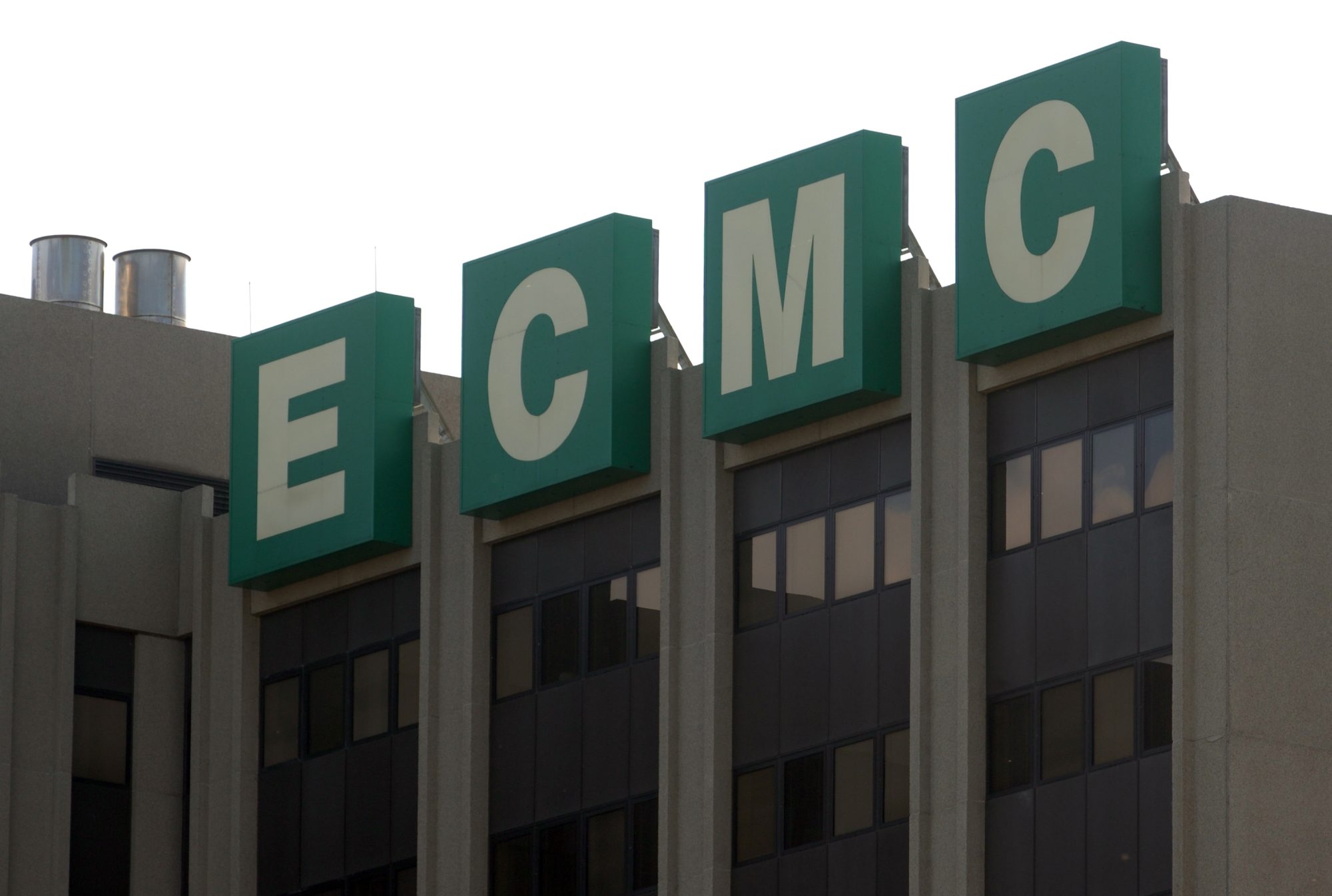 State budget watchdogs have criticized the way the state has delivered more than $1 billion in annual subsidies since 2013 tied to a program designed to help hospitals care for uninsured and poor patients.

The Community Service Society of New York reported two years ago that $558 million of that money was diverted away from the neediest hospitals from 2013-16 to dozens of other institutions that provided about half of such care, or less. A similar review by Empire Center in 2016 showed that four hospitals got grants even though they didn’t lose money treating uninsured patients. That included a $12 million grant to Memorial Sloan Kettering Cancer Center in New York City.

“A dozen or more programs have names indicating that they're about supporting efficiency or innovation – but really what they are about is plugging holes in the budgets of institutions that are losing patients and struggling financially,” Hammond said.

5. Crack down on illegal enrollment

Up to 3.3 million Americans on Medicaid exceed income eligibility guidelines, including as many as 433,000 working-age residents in New York State, estimate researchers Brian Blase with the National Economic Council, which advises the president, and Aaron Yelowitz, economics professor at the University of Kentucky and a senior fellow at the Cato Institute, a libertarian think tank in Washington, D.C.

Nearly half of those in the state above eligibility levels live in New York City, Blase wrote in a piece for The New York Post last November. He estimated that improper payments nationwide roughly equal the entire Medicaid budget for New York.

The governor wants to hold the line on the local share of payments toward Medicaid. Social services departments in New York City and counties across the state could in return help the state by better enforcing eligibility guidelines for the program, Mujica said.

“One of the main obligations and responsibilities of local governments is to make sure that enrollees are eligible,” he  said. 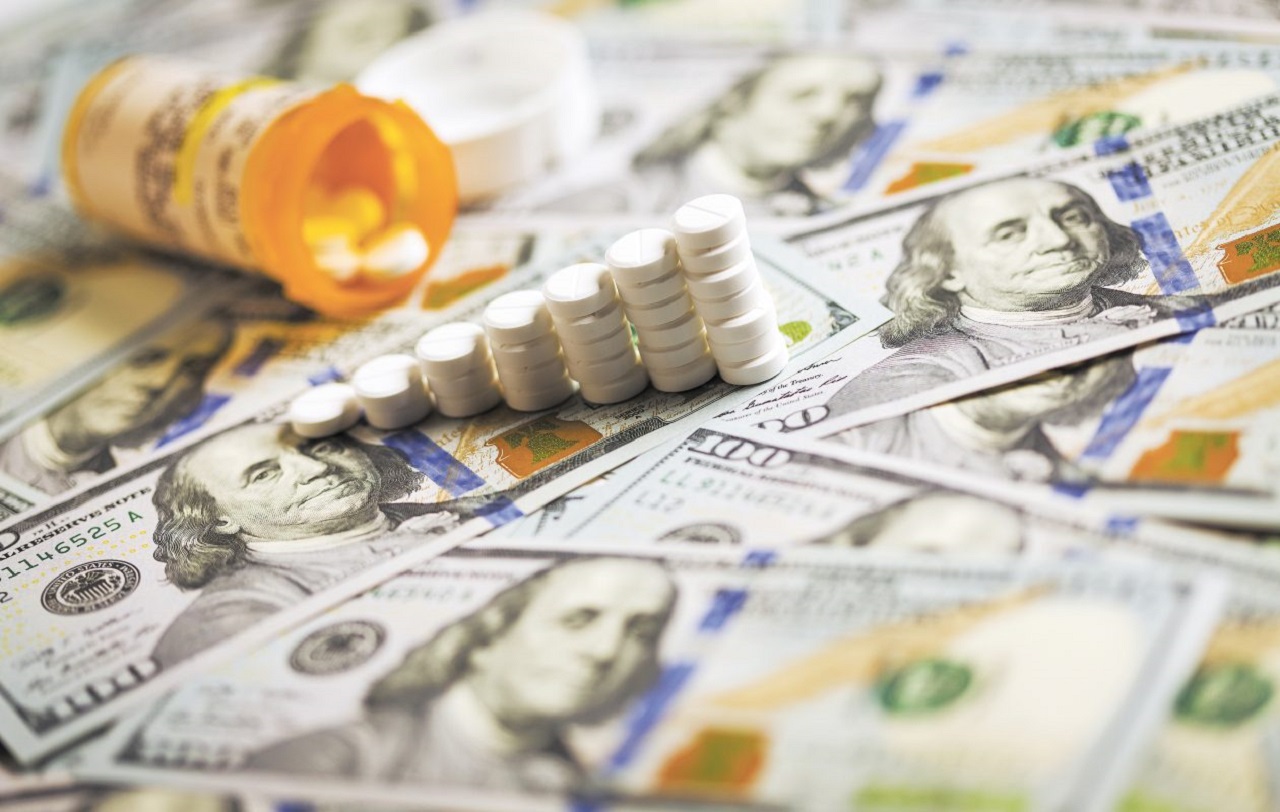 The leaders of the health committees in both houses of the State Legislature believe its time for the state Medicaid system to take back negotiating prescription drug costs for the program.

Gottfried, the Manhattan Assemblyman, suggested that the panel reconsider the governor's decision in 2011 to move most of the Medicaid program into the hands of managed care companies, which he said "take a pretty hefty slice of the Medicaid dollar for their administrative expenses."

He is among those who believe Medicaid managed care plans – in which private health insurers serve patients – deserve part of the blame for higher costs. About 80% of state Medicaid patients are in those plans, some of which are run by for-profit health insurers.

Gottfried wants to go back to the old way, and the governor included that idea in his 2020-21 budget proposal. 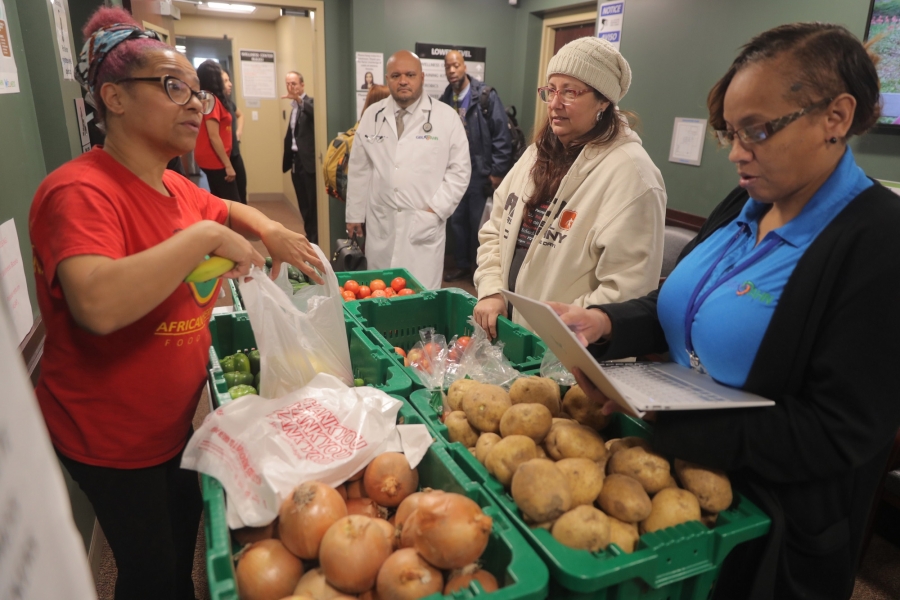 Urban Family Practice, which serves more than 9,000 mostly Medicaid patients in Buffalo, will open its third clinic this month. Since the first office on the West Side opened about eight years ago and became part of the Greater Buffalo United Accountable Care Organization (GBUACO), leaders and staff have labored to move from a fee-for-service health care model – where providers are paid based on office visits, tests, drugs and treatments they prescribe – to a “value-based model” that provides reimbursement on how well a practice keeps patients healthy and helps them avoid hospitalizations. Those who do so receive greater “bundled payments” designed to focus more on greater access to preventative care, creating a less costly health care system over time.

The Medicaid Redesign Team I recommended this idea in 2011. It gave way to several practices across the state that operate like Urban Family Practice.

“We're not asking the state for more money. We're asking the state to make the regulations such that they give us the ability to innovate the way we want to innovate here,” said Dr. Chet Fox, chief medical officer with Urban Family and GBUACO. “The average bariatric surgery cost $40,000. For two surgeries, you could hire a dietitian, maybe even two, that could work full time for a year.” 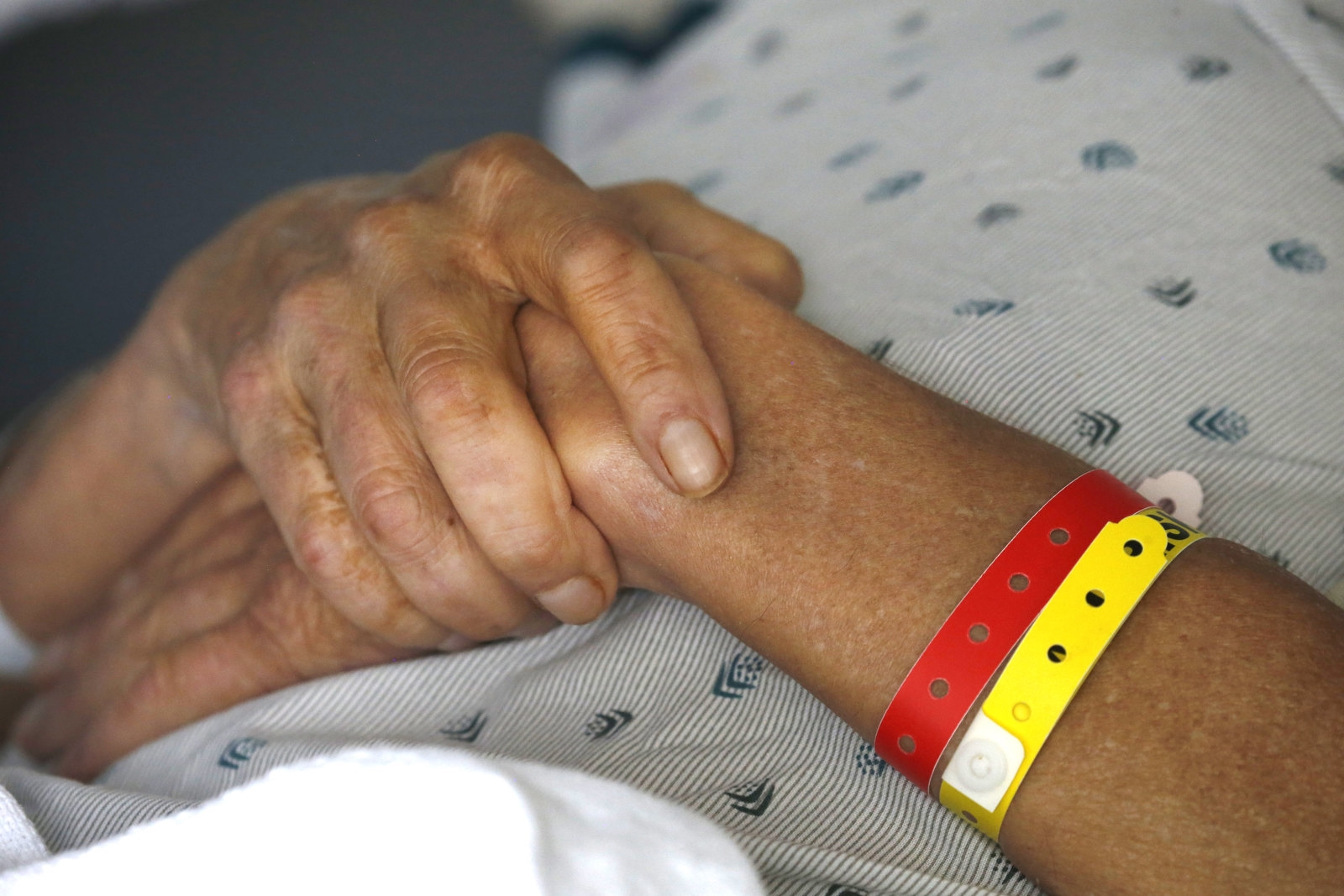 Nursing home and home health care contain loopholes that allow Medicaid to pick up much of the cost of care for upper- and middle-class families. Changes would save money but would have to overcome political unpopularity. (Robert Kirkham/News file photo)

“One big-picture problem with Medicaid is you can be pretty well off financially and yet you can hire a lawyer to arrange your affairs to make yourself look poor for medical purposes,” Hammond said.

That involves moving personal finances to family members or loved ones five years before entering a nursing home so Medicaid will cover costs instead. There is no such five-year lookback for those on Medicaid who receive long-term home care. Hammond is among those who believe there should be. He’d also like lawmakers to scrap trusts as a way for wealthier families to shield money from the program.

“It's been proposed and put off for years, but is politically charged," Hammond said. “Medicaid was meant to be a safety net program. It was not meant to be a way for middle-class and upper-middle-class families to protect their assets.”

The most revolutionary idea: A single-payer health system run by the government and fueled by property, income or sales taxes, or combination of all three.

Gottfried – who wasn’t on the latest Medicaid Redesign Team – has been the leading state legislative universal health care advocate for three decades. He and others point out that other industrialized nations which have gone this and similar routes deliver better health care at about half the cost.

"The whole point of a single-payer system is you get rid of the insurance company bureaucracy and profit,” Gottfried said.

Mujica  estimated such a system would double the tax burden of New York State residents and said it would need to be embraced at the federal level to create efficiency.

Hammond's take? “What’s needed is not sudden, drastic change,” he wrote in his “Busting the [Medicaid] Cap” report last fall, “but continuous improvement and steady discipline.”