A cruise was never on the vacation list for Tracy and Jim Corbran of Tonawanda. Jim didn’t like the idea of being out in the ocean. (“I can be on a river, but not in the water where I can’t see land,” he said.) Tracy wasn’t interested in relaxing by a pool or other traditional cruise activities.

But when the Corbrans, who are classic movie fans and members of the Turner Classic Movie fan club Backlot, heard friends rave about the TCM cruise, their interest was piqued. As they learned more about it – five days of classic movie screenings, celebrities and all things TCM – the cruise proved irresistible.

“The idea of TCM made a cruise interesting. Our friends made it sound wonderful and it was,” said Tracy Corbran, who added she enjoyed the leisurely pace of the cruise and the chance to participate in multiple classic movie activities.

The Corbrans were two of more than 1,500 passengers on the recent TCM Classic Cruise on the Disney Magic that sailed from New York City to Bermuda. Movies were shown on multiple big screens (with free popcorn) from early morning to late at night; TCM hosts and celebrity guests with ties to classic Hollywood talked at screenings and other events. Movie-themed trivia, bingo, dancing and a costume party were held. Traditional cruise activities and shore excursions were offered, too.

It was the seventh TCM cruise – and the seventh sellout. Rooms were gone so fast, in fact, that the 2020 cruise will sail on the larger Disney Fantasy to accommodate demand.

“The TCM Classic Cruise has proven to be one of our most beloved fan experiences, and due to unprecedented consumer demand, I’m proud we’ll be offering fans this engaging and immersive film event once again in 2020,” said Genevieve McGillicuddy, vice president of enterprises and strategic partnerships. “Joining forces again with Disney on an even larger ship allows more fans to come aboard for six entertaining nights at sea with TCM.” 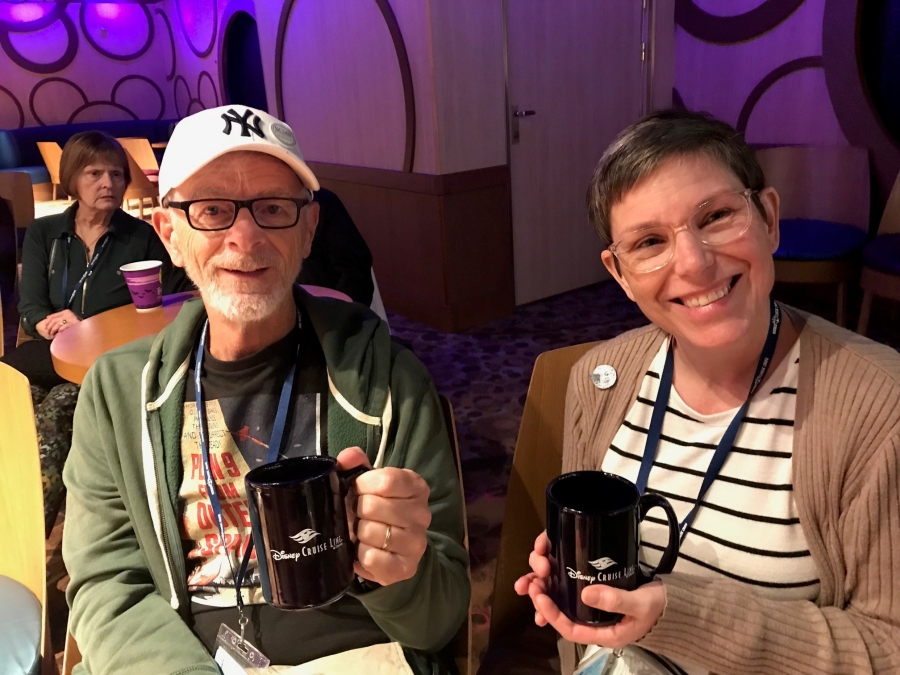 Jim and Tracy Corbran show off the Disney Cruise Line mugs they won in a trivia contest on the TCM Classic Cruise. (Toni Ruberto/Buffalo News)

The TCM cruise is one of hundreds of specialty or themed cruises that are a growing segment of the cruise industry. The allure? An immersive experience with like-minded people on just about any topic including music (“The Outlaw Country Cruise”), astronomy (a space-themed cruise for World Space Week on the Queen Mary 2), comedy (The Impractical Jokers), wrestling (Chris Jericho’s Rock ‘N Wrestling Rager at Sea) and television (“The Walking Dead”).

Humberto Martinez of Miami has taken multiple traditional cruises, but the TCM cruises are his favorites. ”For those who love the Turner Classic Movies channel or movie classics in general, these cruises offer a unique atmosphere and experience,” said Martinez, who has attended three TCM cruises with his wife, Consuelo. “Not only does one get to meet, chat and mingle with the TCM hosts, but one gets to meet new and old friends who share the same passion for movies and share experiences and plan future meetings and cruises.”

Anthony Diaz, CEO of Sixthman, an industry leader in themed cruises, understands the appeal of the shared experience.

“Whether it’s a genre of music like big iconic pop star like Kesha or blues rock with Joe Bonamassa, people love coming together when they share a passion,” Diaz said. “While that proves itself with music, it has expanded into film with TCM and other areas like the Impractical Jokers. We’re even doing a cruise with Theresa Caputo, the ‘Long Island Medium.’

“It’s neat to see this notion that when you bring people together who are passionate about something and give them opportunity to vacation with heroes something really special happens. The artists want to come back and the guests come back and they bring friends,” Diaz said, adding that about 60% of guests on Sixthman cruises return, often bringing friends with them. 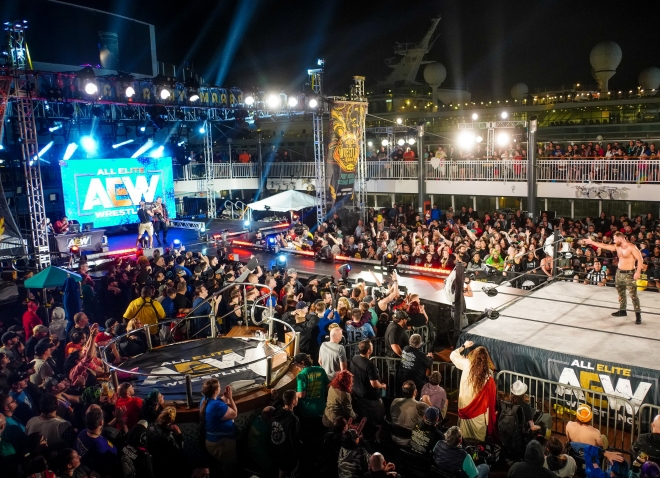 Though fan-based cruises are usually booked through companies like Sixthman and Entertainment Cruise Productions, AAA Western and Central New York can help with other themed cruises. Elizabeth Carey and Brian Murray, hosts of WECK Radio's AAA Talking Travel show, are hosting a Bermuda cruise in October that features such events as a WECK cocktail party.

“We’re finding people are becoming more adventurous and not doing traditional cruises,” said AAA travel consultant Renee Pilley of the Williamsville office. She said she has worked with customers on such specialty cruises as Mardi Gras-themed and Disney trips including “Halloween on the High Seas” and a “day at sea” with “Star Wars” and Marvel. Food and drink specialty cruises are very popular, too.

“People come in for anything to do with food,” said Pilley, who recently booked a wine cruise called “Taste of Bordeaux” for customers who are especially fond of the wine from the region. The fact that it is hosted by Travel Channel’s Samantha Brown as part of her “Places to Love” series is a bonus.

“Everyone knows her, everyone loves her. Samantha Brown is a travel celebrity, and everyone wishes they could have her job,” Pilley said. 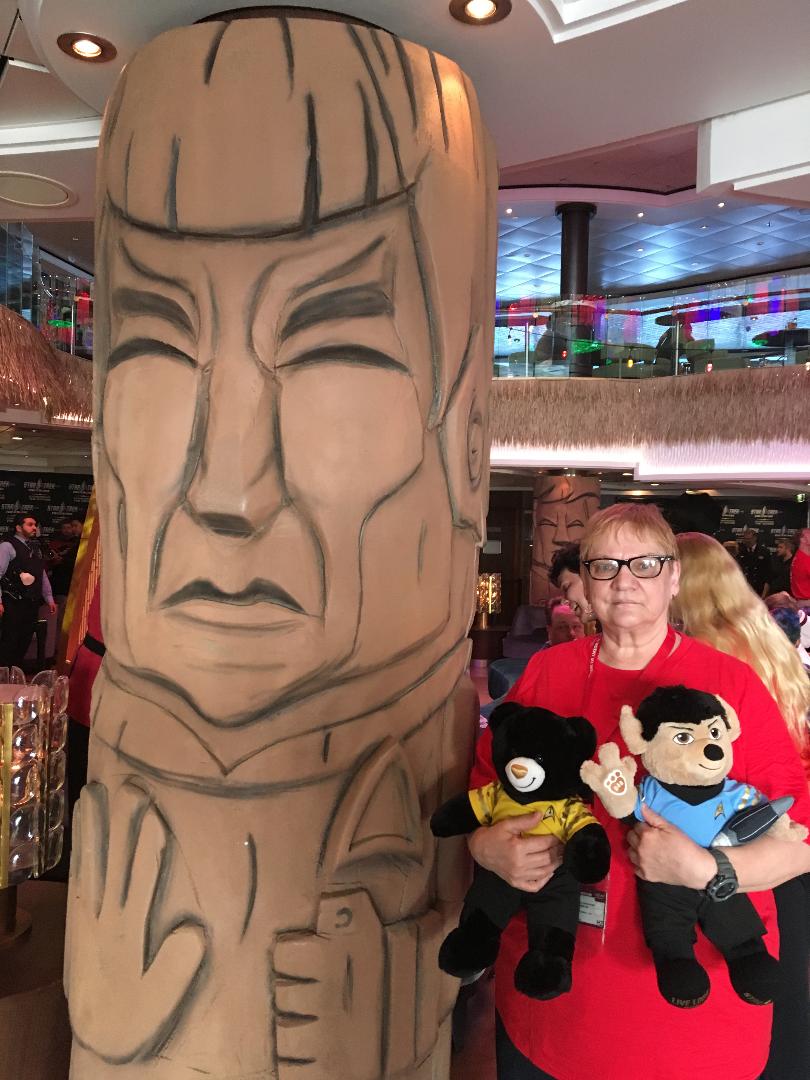 They have just taken their fifth specialty cruise, the sold-out, seven-day “Star Trek” cruise on Royal Caribbean’s Explorer of the Seas, which featured more than 30 guests including such “Star Trek” luminaries as Kate Mulgrew, Jeri Ryan and yes, William Shatner.

“We were very surprised at how accessible everyone was,” Mergenhagen recalled of their first “Star Trek” cruise.

“It was like a convention on a ship,” Tetewsky added. “Without a doubt, it is the best ‘Star Trek’ convention you will go to.”

While a traditional convention may have up to 20,000 people seeing 20 or so celebrity guests, cruises are generally limited to 2,000 to 4,000 people often with the same number of stars.

“You will see them everywhere on the ship and they will talk to you,” Tetewsky said about celebrity guests. “You’re also sharing the cruise with a base of like-minded fans, so you’ll never run out of people to talk to.” 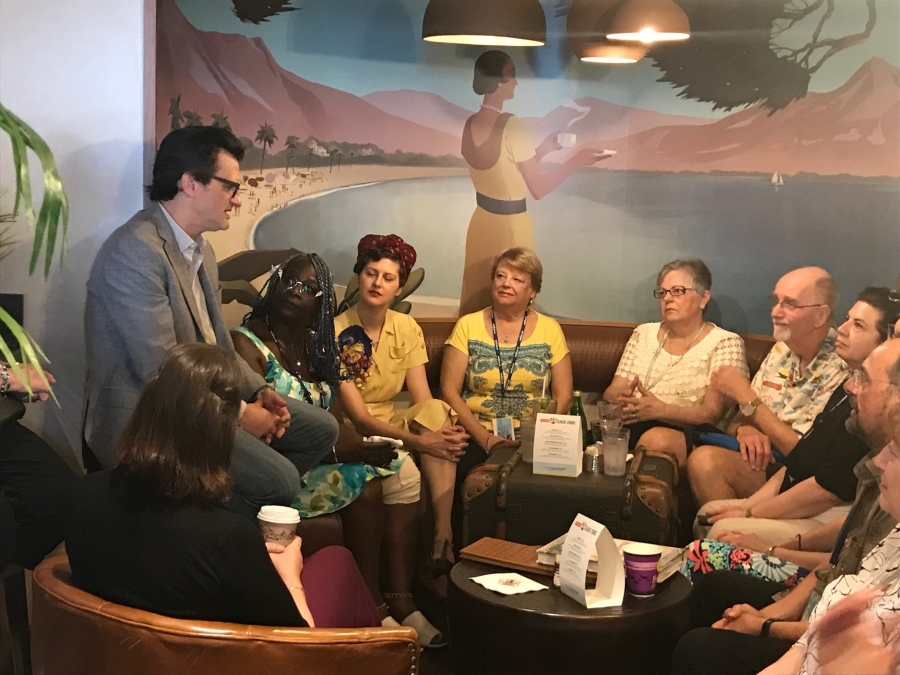 Classic movie fans had the chance to sit and chat with TCM host Ben Mankiewicz throughout the 2019 TCM Classic Cruise. (Toni Ruberto/Buffalo News)

Jim Corbran had a similar experience on the TCM cruise, especially when it came to the network’s hosts Ben Mankiewicz, Dave Karger, Alicia Malone and Eddie Mueller who mingled with fans throughout the ship when they weren’t doing presentations.

The experience, Corbran said, made it “feel like you know them.”

AAA of Western and Central New York: Visit westerncentralny.aaa.com for details on all cruises.

Sixthman: It started with Rock Boat concerts, now in their 20th year. Since then, Sixthman has hosted themed cruises in music, movies and more. For details on future cruises, visit sixthman.net.

Entertainment Cruise Productions: Since 2001, ECP has hosted more than 80 theme cruises from "Star Trek" to its Jazz Cruise, and is celebrating its 20th anniversary in 2020. Visit ecpcruises.com.

TCM Classic Cruise: Fan demand led to TCM's next cruise being booked on a larger ship, the Disney Fantasy. The six-night Western Caribbean cruise is from Oct. 4 to 10. Visit tcmcruise.com.