I attended a wedding last October in Washington, D.C., and sat next to a woman who lived in the same dormitory as Hillary Clinton at Wellesley College.

Naturally, I asked her thoughts about the former first lady, secretary of state and 2016 Democratic presidential nominee.

The wedding guest remained close to Clinton and said many flattering things about her personality, warmth and sense of humor.

I came away wondering if some members of the media had done a terrible disservice over the years in its portrayal of Clinton as a cold, calculating, ambitious, untrustworthy woman.

To my surprise, the woman who sat next to me, Karen Williamson, appears briefly in the first of four episodes of the Hulu documentary “Hillary” from Buffalo filmmaker Nanette Burstein. It premiered Friday, March 6, on the streaming service.

It addresses some of Clinton's blind spots, flaws and mistakes but overall is a flattering portrait of her that uses campaign footage from her 2016 presidential run and features interviews with her staff, journalists, her apologetic husband, Bill, daughter Chelsea and friends like Williamson, who was one of only a handful of African Americans in Clinton’s Wellesley class.

Burstein, a Nichols School graduate and Oscar-nominated filmmaker (“On the Ropes,” “American Teen” and “The Kid Stays in the Picture”) is out of the picture as the interviewer asking Clinton about key points in the campaign and her life that address the lifelong sexism she has faced and speak to the history of the women’s movement.

In 35 hours of interviews, Burstein goes into sensitive areas that include President Clinton’s scandal involving Monica Lewinsky that led to his impeachment and threatened their marriage; Hillary’s email controversy as secretary of state; and her judgment during the 2012 Benghazi terrorist attack on the U.S. consulate that resulted in the death of four officials, including Christopher Stevens.

“I am the most investigated person in America,” Hillary Clinton said at one point.

To her disappointment, she noted that even if the investigations come up empty, people remember the allegations.

The documentary arrives three days after Joe Biden’s stunning Super Tuesday performance, with it clear how Clinton feels about Bernie Sanders in one brief comment that received much attention in January.

“Nobody likes him, nobody wants to work with him, he got nothing done,” said Clinton near the beginning of the second episode of “Hillary.”

There are a couple of other “Hillary” moments that are timely because of recent media news.

Rush Limbaugh, the controversial conservative talk show host who received the Medal of Freedom from President Trump, is heard making a disgusting comment about the Clintons' daughter Chelsea.

Chris Matthews, who resigned from MSNBC this week after several controversies, is heard making an offensive comment about Hillary.

Burstein didn’t know Clinton before she was chosen by Clinton, the film’s producers and Hulu executives to direct the film and be one of the executive producers.

Burstein said Hulu asked Clinton to sit in meetings with a bunch of filmmakers before she was elected to do the film.

“They wanted to make sure that she would be comfortable with the filmmaker who was doing this because if not, it probably wouldn't have gone very well,” said Burstein in a telephone interview.

She added that Hulu had thousands of hours of behind-the-scenes campaign footage of Clinton and her staff but wasn’t sure what the project would be. 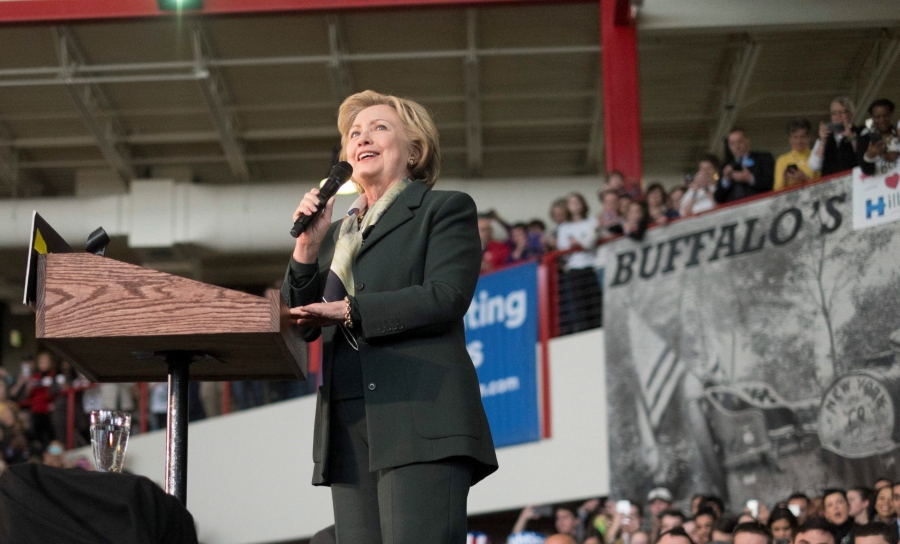 “I said I don't want to do a campaign film,” said Burstein. “I want to do something bigger.”

Burstein wrote a whole, detailed treatment to describe how she thought the series would unfold. Clinton did not have any creative control.

“One of the things that was very important for me to do in the series was tie it into the larger historical moments that were going on that she (was) either affected by or was influencing herself,” said Burstein. “A lot of that was women's history over the … years as well as culture, political culture, partisan politics.

“I think that was very appealing to her … that you could use her life as a way of understanding this importance in history both for women and the culture at large … If I just said, ‘hey I want to do this tell-all about your life,’ that would not be appealing nor would I want to do that either.”

Burstein said Clinton was a better interview subject as time went on.

“I think she was less comfortable the first day or so and each time she became much more comfortable to the point where within a day or so she seemed quite at ease,” said Burstein. “We were able to really capture her thoughts and feelings and even quite intimate thoughts and feelings at times, her venting ... a whole host of emotions when you do interviews for seven days.”

Burstein didn’t get to interview everyone she requested.

“I tried very hard to get 30 different Republicans,” said Burstein. “Not just any Republicans. Republicans who had been in office from the time of the '90s onward dealing with a lot of things that she was, and they just universally would say no. They didn’t want to appear in the documentary about Hillary Clinton even though I said she has no control and this is a fair and balanced piece.”

She got former Speaker of the House Newt Gingrich on his cellphone after his office had rejected the interview.

“He told me, ‘I would rather stick a needle in my eye than do this interview,’ ” recalled Burstein. “That was a bit shocking that partisan politics are so heated right now that no one was willing to participate in about a story that had to do with her.”

She eventually got one Republican, Bill Frist, the Senate majority leader when Clinton was first lady, for an interview.

“He knew her well,” said Burstein. “He was fantastic.”

Of course, Hillary bashers probably would rather stick a needle in their eye than watch this series.

But some of those willing to watch may conclude by the end of it how much they misjudged Clinton. They may even come to appreciate her sense of humor, as she imitates one congressman and laughs after saying she knew she would never have a dull or boring moment if she married Bill.

“And that has proven to be true,” said Clinton, followed by a big laugh.

Burstein didn’t have to reflect long when asked what she considered the most misunderstood thing about Clinton.

“I go on Twitter and I read these people saying that she's a serial killer and a pedophile and she killed Jeffrey Epstein in his jail cell, so I mean it just could not be further from the truth in my opinion,” said Burstein. “I mean the woman I met is very different. She’s hardworking and she seems to really care about social justice. You know no one is perfect, she is certainly flawed but not in any way close to what she is being accused of. It’s insane. There is such a disconnect between the person she is and the conspiracy theories of who she is.

“She is a warm person. That’s the other misconception – that she's very inauthentic and awkward. I deal with this in my film … In person she's a warm, intelligent human being.”

That pretty much confirmed what I was told at the October wedding.