The A-2 final features two teams that have combined for the past 11 A-1 championships. Williamsville South claimed its sixth consecutive sectional title with a win against Grand Island last year.

The Billies, ranked second in the state in Class A and among Western New York large schools, remained unbeaten against sectional opponents this season by grinding out a 71-64 victory Tuesday night against Amherst, which entered the game sixth in the local rankings and 21st in the state.

This was the closest of South’s three wins this season against its ECIC II archenemy and Main Street neighbor. The Billies have topped the Tigers in nine of 11 matchups over the past years. The teams met in the sectional playoffs twice during that span, with Amherst winning the Class A crossover championship game in 2017, and South taking that game in 2018.

“It’s always tough to beat a team three times,” said South’s 6-foot-5 junior center and UConn recruit Amari DeBerry, who scored 21 points and dominated the paint on both ends of the floor. “We’ve played against them so many times and they have scouting reports on us, so it really came down to being competitive and finishing every play all the way through. Doing all the little things to make the big things happen.”

Freshman guard Gretchen Dolan led South with 24 points, following her 30-point game in last week’s quarterfinal win against West Seneca East. She scored 15 in the second half, including crucial free throws in the final minute. Gretchen and senior sister Hannah Dolan (10 points) each made three 3-pointers, taking advantage of openings on the outside when Amherst collapsed its defense on DeBerry.

Junior guards Emma Klein (24 points) and Ella Wanzer (17 points) led Amherst (13-7). Wanzer made a 3-pointer and Klein converted a 3-point play following an offensive rebound to cut South’s lead to 67-64 in the final minute. But an inbounding violation with 17 seconds remaining thwarted the comeback.

The matchup between two of WNY’s premier programs drew a crowd of close to 300 people, including UConn assistant Shea Ralph, and had a championship atmosphere.

“That was a heavyweight matchup,” South coach Kristin Dolan said. “The environment, the style of play, they’d make a play and we’d have to come down and respond. …

“We knew it was going to be a battle all night long. We told the girls, even though we beat them earlier in the season, that meant nothing. They were going to come and bring their A game. And that’s what they did.” 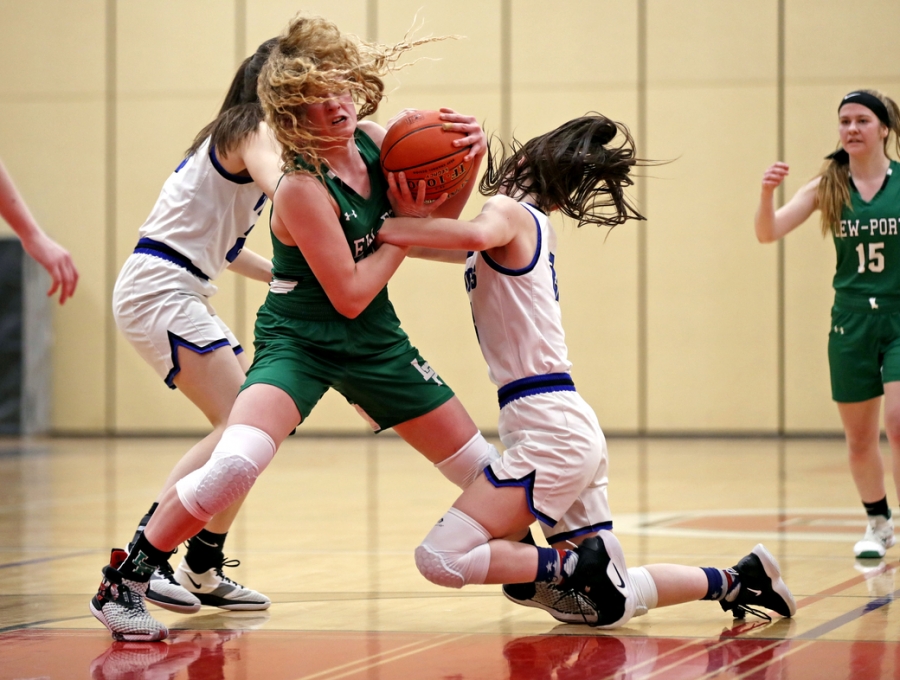 Grand Island, the No. 8 team in The News’ large school rankings, reached the sectional final by beating Niagara Frontier League nemesis Lewiston-Porter for the third time in four meetings this season.

Lydia Sweeney had 22 points, 11 rebounds and seven steals to lead the Vikings (18-5) in the 43-34 victory. She also moved past Cassie Oursler for second-place on GI’s all-time scoring list with 1,320 points.

“It’s awesome,” Sweeney said. “That was our goal all year to go back to Buff State. Now we have a new goal, to go and win the sectional title.”

Sweeney scored 19 points in the second half. After Lew-Port used a 7-0 run to pull in front 21-20 early in the third quarter, Sweeney led a 10-0 surge by creating steals, drawing a charge and finishing on the offensive end.

“We are rivals with Lew-Port and we know it’s always going to be a battle when we play them,” GI coach Kristin Wegrzyn said. “We know each other’s playbooks and each other’s defensive sets. We knew plays were going to break down. But they can’t scout offensive rebounds and tenacity and defensive communication.”

Sweeney said the Vikings have looked forward to a rematch with Williamsville South since losing 65-45 in last year’s sectional final.

“A powerhouse like that,” she said, “it’s exciting to get another opportunity against them.”

“Last year, we went into that game a little scared and not in attack mode,” Wegrzyn said. “I know our mentality is different this year.”