A Lockport man facing two hate crime charges told jurors Wednesday that he was scared for his life when he pulled out his gun after a minor traffic accident last July in North Buffalo.

Jeffrey L. Calhoun testified during his Erie County Court trial that he was not angry after a black woman rear-ended his pickup on Colvin Avenue.

At one point, while he was pursuing Jeanneie Muhammad, she turned and it appeared like she was reaching for something in her purse, Calhoun said. A short time later, as several people had gathered around him, he was punched in the face, he told the jury.

Calhoun, 63, was arrested after the incident on July 16, 2019, and he was later indicted on two felony hate crime charges and two other charges.

The jury, which began deliberations later in the day, will be able to find Calhoun not guilty of the two hate crimes but still consider whether he is guilty of the underlying crimes without being motivated by racial bias, State Supreme Court Justice Christopher J. Burns ruled.

Calhoun has been charged with first-degree unlawful imprisonment and second-degree menacing, both felony hate crimes, as well as a felony count of impersonating a police officer and misdemeanor assault.

Prosecutors opened their case Tuesday portraying Calhoun as "dripping with anger" at Muhammad. 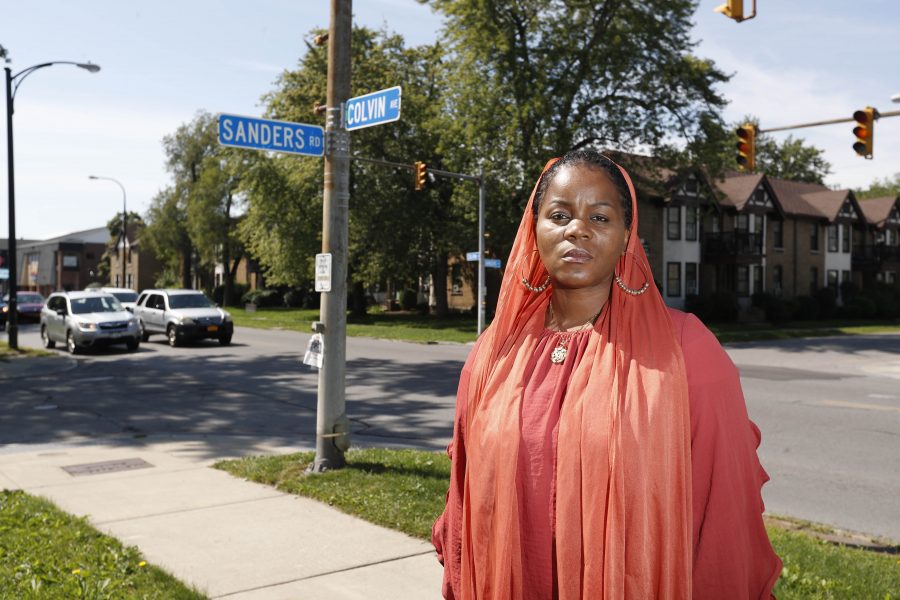 Jeanneie Muhammad wants to make sure the man who pulled out a gun following a minor traffic mishap near this North Buffalo intersection gets prison time so that a message is sent to others “with his mindset.” (Sharon Cantillon/Buffalo News)

Muhammad alleged Calhoun, who is white, used a racial slur against her.

A video taken by a bystander captured part of the incident and was played several times during the trial.

Calhoun testified for about 70 minutes, much of it under direct examination by his attorney, Daniel J. Henry Jr.

He pulled out his pistol because he felt something hit his holster and thought someone might be trying to grab his gun, Calhoun said.

Calhoun told the jury he thought Muhammad was going to leave the scene and denied any racial motivation behind his actions. He would not have acted differently in any way that day if the driver of the other car was any other race, he said.

"There was no doubt in my mind that she was getting ready to pull away," Calhoun said.

He has never used the racial slur toward African Americans that he is accused of using in this incident, he testified.

During his closing argument on Wednesday, Assistant District Attorney Justin Wallens asked the jury to compare Calhoun's demeanor on the video to his calm demeanor while on the witness stand.

Prosecutors allege Calhoun told Muhammad when he first approached her vehicle he thought she probably didn't have any insurance for the car she was driving that day.

Wallens said Calhoun's motivation for his actions must have been race, because there was no other possible reason for it.

"This is not the kind of thing that incites that kind of rage," Wallens said.

After the minor "fender bender," Calhoun flew into a fit of anger, he said, adding Calhoun had no reason to believe Muhammad was trying to leave the scene.

"There's a woman sitting in a car," Wallens said. "What got him so angry? You gotta ask yourself that."

Henry, Calhoun's attorney, told the jurors it was Muhammad who didn't want the police at the scene because she was driving with a suspended driver's license. He added that Calhoun was allowed to try to keep her at the scene if he believed she committed an offense – akin to what would be called a "citizen's arrest." Muhammad was driving without a license and was following his vehicle too closely, he said.

Calhoun, anxious about the situation, never intended to threaten anyone with the gun because the firearm’s “safety” lever was engaged at the time he displayed it, Henry said.

On Tuesday, Muhammad testified she thought she could get shot during the struggle over her purse.

A Buffalo police officer testified Tuesday that he was within earshot of Calhoun the entire time he was at the scene and never heard Calhoun use a racial slur.

The jury of eight women and four men deliberated for about an hour before being sent home late in the afternoon.

Prosecutors: Man accused of hate crimes was 'dripping with anger' after traffic incident