Final approval for several Lake Ontario fishing regulations changes is now in the books, and rules will go into effect on April 1. It’s been a long time coming.

After months of discussion and comment periods, five regulations – four for Lake Ontario and its tributaries and one for Erie County off Lake Erie – were finally approved this week. More than 550 comments were received on the proposed regulations and most were highly favorable, according to the recent announcement from the state’s Department of Environmental Conservation. Earlier in the process, 80% of comments received were in favor of the package.

The Lake Ontario regulations package came as a result of the Lake Ontario Fisheries Management Focus Group, made up of four fisheries delegates from each of the lake’s four regions. The least controversial of the Lake Ontario proposals was the extension of the lake trout season for the lower Niagara River and Lake Ontario. Based on the new rule, anglers will be able to legally target lake trout starting Dec. 1 instead of Jan. 1. It falls in line with the same season that is currently observed on the Canadian side of the river and the lake, too.

“Most of the lake trout move out of the river by December, so it won’t have a huge impact on the resource,” said Capt. Matt Yablonsky of Youngstown, operator of Wet Net Charters, which fishes year-round in the river and the lake. “Most people just catch and release lake trout anyway.” 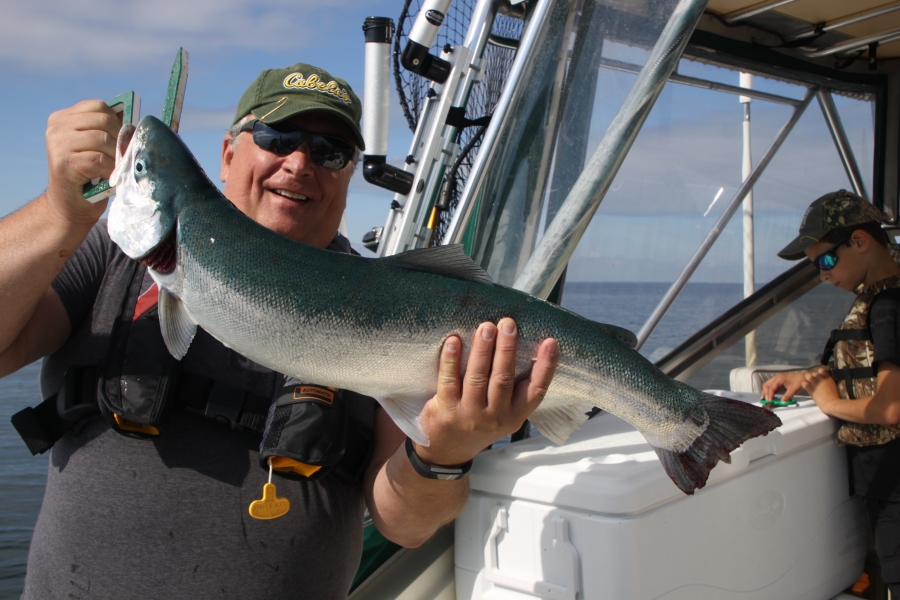 Rich DeLisle of Wisconsin shows a steelhead he caught in Lake Ontario during the summer. The daily creel for steelhead is reduced from three to two in the lake starting April 1. (Bill Hilts Jr./Buffalo News)

A new open lake regulation on steelhead was met with a bit more resistance. The new creel limit for salmon and trout reduces steelhead from three to two fish as an option. In Lake Ontario, anglers have the option of keeping a combination of three rainbow trout (including steelhead), brown trout, Coho salmon and Chinook salmon. The two steelhead limit falls in line with the current regulation that is in place in Canadian waters.

“I have spoken to a lot of charter captains who work the lake and I didn’t find one charter guy in support of the new two-fish limit for steelhead,” Yablonsky said. “I think the new rule could actually lead to more steelhead being killed, with nothing we can do about it. Quite often, when we are targeting salmon in the lake, steelhead will be mixed in. If we are pulling them up from 80 to 100 feet below the surface in the summer, survival rate is low if we want to release them. With a lower limit for steelhead, some of these fish just won’t survive.”

Due to an oversight when the regulations were originally written, the lower Niagara River is exempt from the regulation of two steelhead per person. Discussion is underway to have the river fall in line with the open lake regulations next year, like it traditionally has. However, the lower river has long been its own little fishery with special regulations. One example is the special walleye regulation of only one fish per person per day from Jan. 1 to March 15. There also is a three fish in combination regulation that includes no more than two lake trout. The open lake keeps the lake trout limit separate from the other three-fish limit mentioned earlier.

Two other regulations changes involve Lake Ontario tributaries. A hard push came from tributary proponents on the focus group to lower the brown trout limit from three to one fish per person, as well as increase the size limit from 21 inches to 25 inches for steelhead. Steelhead already has a one-fish per person daily limit. The new stream limit will be no more than one steelhead with a minimum size of 25 inches and no more than one brown trout per person per day. Take note that the open lake minimum size for steelhead will remain at 21 inches. 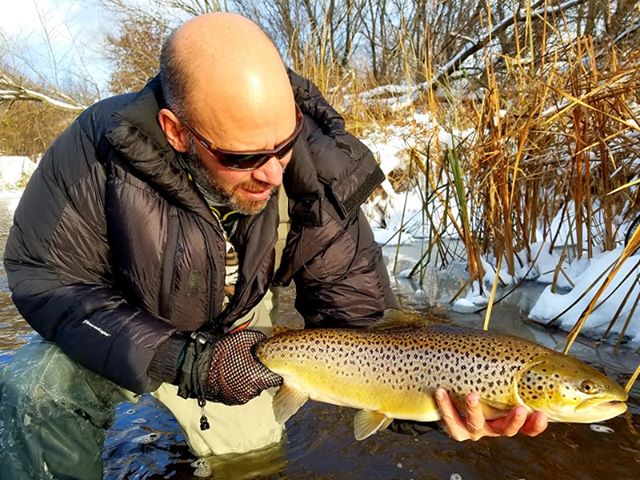 Paul Rose of North Carolina shows off a tributary brown trout he caught while fishing with Ontario Fly Outfitters. The daily creel for brown trout will drop from three to one fish per person in the tributaries starting April 1. (Photo courtesy of Scott Feltrinelli)

“These are some really good outcomes from the Lake Ontario Fisheries Management Focus Group,” said Scott Feltrinelli with Ontario Fly Outfitters, a member of that group for Region 9. “All of these ideas are very forward-thinking and conservation-oriented so as to enhance the angling experience for all sport fisherman on the lake and in the tributaries.”

With more of a focus on catch-and-release fishing in the tributaries, it could pose an issue with nonresident anglers coming in to pursue salmon and trout every year. How it will be received is a question that has yet to be answered.

Another possible question is, will the lower Niagara River be included in the tributaries instead of the lake? That possibility has been broached.

“The new tributary regulations are too restrictive for the river fishery,” Yablonsky said. “My customers are now about 50/50 between keeping fish and catch-and-release. Sure, we try and talk them into releasing fish if they are not going to eat them. I see some attitudes changing but the lake regulations are best for the lower river.”

Right now, there are no changes to the lower Niagara River fishery other than the lake trout season extension.

More details on these new regulations can be found at www.dec.ny.gov.