Who is the little kid in this photo?

Dave Schofield took this picture five decades ago in the moments before the child would have a chance encounter with Sabres captain Gerry Meehan.

The Meehan photo is among the most famous in Sabres history. This one has never been published before now. Schofield offers it here in hopes maybe someone will recognize the child, who probably would be in his early 50s now.

“I’d like to meet him,” Schofield says. “I’ve been looking at him for, what, almost 50 years now. It’s almost like he’s a member of the family.”

John Boutet, site and exhibit chair for the Greater Buffalo Sports Hall of Fame, thought he’d found the child a few years ago. Boutet displayed the Meehan photo in an exhibit on the history of Memorial Auditorium that he put on at Coca-Cola Field in 2017. He included a note under the photo asking if anyone could identify the child.

That’s when Boutet overheard a man telling some of his friends that he was the kid in the picture. Doug Thurlow had good reason to think it was him. His late grandfather worked security for the NHL in Buffalo, which would explain how this kid got inside the gate where the Sabres would go to and from the ice at the Aud.

But Thurlow was born in 1971. The math didn’t quite add up: The Meehan photo was taken during the 1972-73 season, and Schofield thinks it was taken early in that season. The child looks older than that, so we sent Thurlow this previously unpublished photo because it shows the child's face more clearly than does the famous photo. Thurlow showed this photo to his parents – and they told him it wasn’t him.

“For so many years, I always thought it was me,” Thurlow says. “I have so many great memories of being in the locker room and meeting all the players. I hope they do find the kid in the photo. I feel like we have a lot in common.” 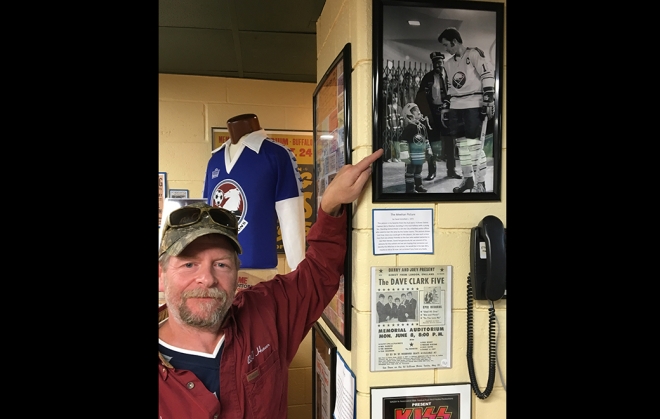 Doug Thurlow in 2017 pointing at the kid he thought was him in the famous photo. (Photo courtesy of John Boutet)

So who is the child looking up at Gerry Meehan? Does the person still live in Western New York? Are they still a Sabres fan? Is it you?

If you know who it is, please contact The Buffalo News at sports@buffnews.com. Schofield has an 18-by-12 print that he’d like to give the kid who isn’t a kid anymore.

“People ask me all the time what’s my favorite photo I’ve ever taken,” Schofield says. “And I always say, ‘I don’t know, but this – this one right here – is definitely one of them.’ ”