He was standing where the Buffalo Sabres would come out of their locker room at the Aud in the early 1970s when he spotted a small boy in a Sabres uniform standing inside the players’ gate. Just then, Sabres captain Gerry Meehan emerged from the locker room and walked over to the boy. Meehan said a quick hello, then headed off to the ice.

“I shot two frames,” Schofield says, “and right away I thought I had something.”

Yes, he did. The Sabres now are in the midst of their 50th season, and Schofield’s photo remains among the most famous in franchise history.

“That delights me,” he says, “but always surprises me.”

Schofield, who’s 72, couldn’t be sure he had something until the next day. He worked the game that night for the Sabres and then drove to the darkroom at Canisius College to develop the negatives.

“I left them to dry and went home. The next day I came back to do the contact sheets. I looked at what I had and thought, ‘Hey, that’s pretty cool. I like that.’ ”

His photograph resonates across half a century because it captures something universal about the mythic pull of heroes.

Who is this little Sabres fan? Is it you?

The boy looks wonderingly up. The captain looks benevolently down. And a security officer – the late Art Starks as a one-man Greek chorus, standing in for all of us – smiles serenely behind them.

Coke would later sell pop with a similar scenario. Mean Joe Greene sees a kid in the tunnel on the way to the Pittsburgh Steelers' locker room. “Hey, kid ... catch,” Greene says as he tosses the kid his jersey. The ad remains a classic 40 years later.

People often tell Schofield his photo reminds them of that commercial.

The Meehan photo was taken during the 1972-73 season and appears in the Sabres’ 1973-74 media guide. Schofield was in his first full season shooting freelance photos for the Sabres during that 1972-73 season. He had started shooting games a year earlier, when he was still a student at Canisius College. And how a college kid ended up shooting Sabres games is a feel-good story from an era when the Braves and Sabres were expansion babies.

Schofield played soccer at Canisius and injured his knee. The newborn Braves were practicing at the Koessler Athletic Center, and their trainer, Ray Melchiorre, saw Schofield limping. Melchiorre invited him downtown for treatment. When Schofield got to the Aud, he took his Nikon FTn inside with him because he didn’t want to leave a new camera in his car.

By the time Schofield’s treatment was done, he realized the Sabres were playing. So he stopped to watch from a perch behind the red seats and decided to shoot the three rolls of film he had in his bag. The next day, he dropped them off for Paul Wieland, the Sabres’ director of public relations, with a note asking if he would critique the photos.

Wieland called back a few days later. He wanted to buy five photos at $20 a pop, and he invited Schofield to work with Bob Shaver, the legendary photographer, who also shot for the Sabres.

“I could not have asked for anything in the world better than that,” Schofield says. “Bob Shaver is the best there ever was, and he took me under his wing.”

The Hockey Hall of Fame holds 100,000 of Shaver’s photos in its collection. Schofield had one hanging in the Hall for a while. It is of the Dryden brothers trading sticks in the handshake line after Ken Dryden’s Montreal Canadiens eliminated Dave Dryden’s Sabres in the 1973 Stanley Cup playoffs. 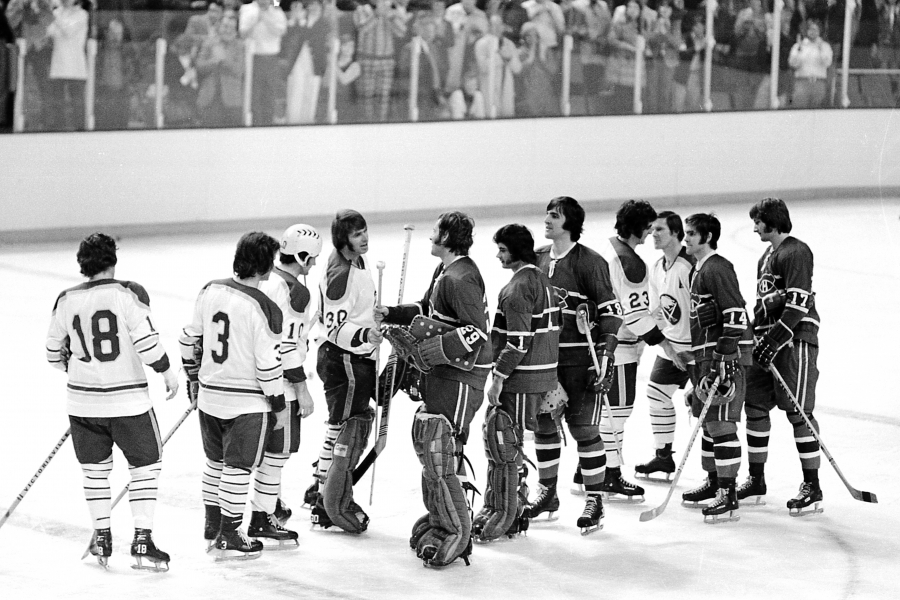 Dave Schofield had a photo hanging in the Hockey Hall of Fame for a while. It is of the Dryden brothers trading sticks in the handshake line after Ken Dryden’s Montreal Canadiens eliminated Dave Dryden’s Sabres in the 1973 Stanley Cup playoffs. (Photo courtesy of Dave Schofield)

Schofield credits Wieland with opening a door to his career. Wieland, who went on to teach journalism at St. Bonaventure, is known for a generous spirit and for giving young people a start in the sports biz.

“Look, I’m no hero here,” Wieland says. “I’m a visual guy. I understand good composition. And I could see right away that Dave had the eye.”

As it happens, Schofield also had an eye for a student at D’Youville College. He met Pat – now his wife of 48 years – at the Armory tavern on the day the Miracle Mets won the 1969 World Series. They moved in the mid-1970s to the Jersey Shore, where he taught English and coached soccer at St. Rose High School in Belmar, while still shooting photos on the side.

In the mid-1980s, Schofield went into photography full time and was team photographer for a pair of minor-league ballclubs, the Lakewood BlueClaws and the Trenton Thunder, in New Jersey, until he retired in 2016. It was in Lakewood that he snapped a photo of a small girl staring up into the beak of the San Diego Chicken, a shot that offers echoes of the one he took at the Aud all those years earlier. 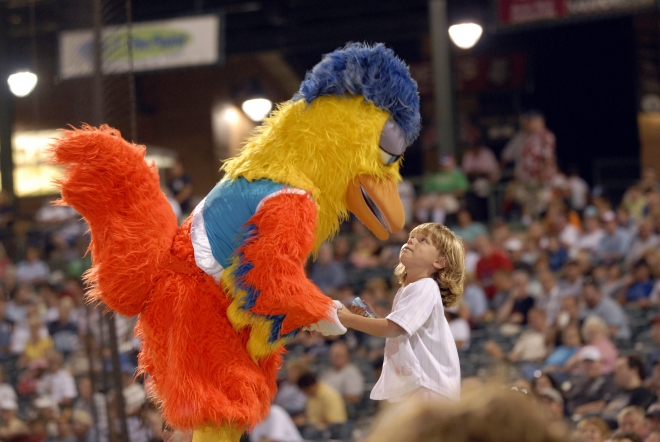 In the mid-1980s, Dave Schofield was team photographer for a pair of minor-league ballclubs in New Jersey, the Lakewood BlueClaws and the Trenton Thunder. It was in Lakewood that he snapped a photo of a small girl staring up into the beak of the San Diego Chicken. (Photo courtesy of Dave Schofield)

Schofield was a frequent visitor to Buffalo over the decades as the color commentator on radio broadcasts of Canisius men’s basketball games. The drive to Buffalo was 400 miles – and 10 miles to conference rival Monmouth – and he figures he pounded two Toyotas and a pair of Hondas into submission while he patrolled the Metro Atlantic Athletic Conference for 25 years.

When Canisius earned an NCAA Tournament bid by winning the conference tourney in 1996, Schofield called the game on radio and then took a shot of Mickey Frazier sitting triumphantly on the rim. It remains a signature photo of the John Beilein era. 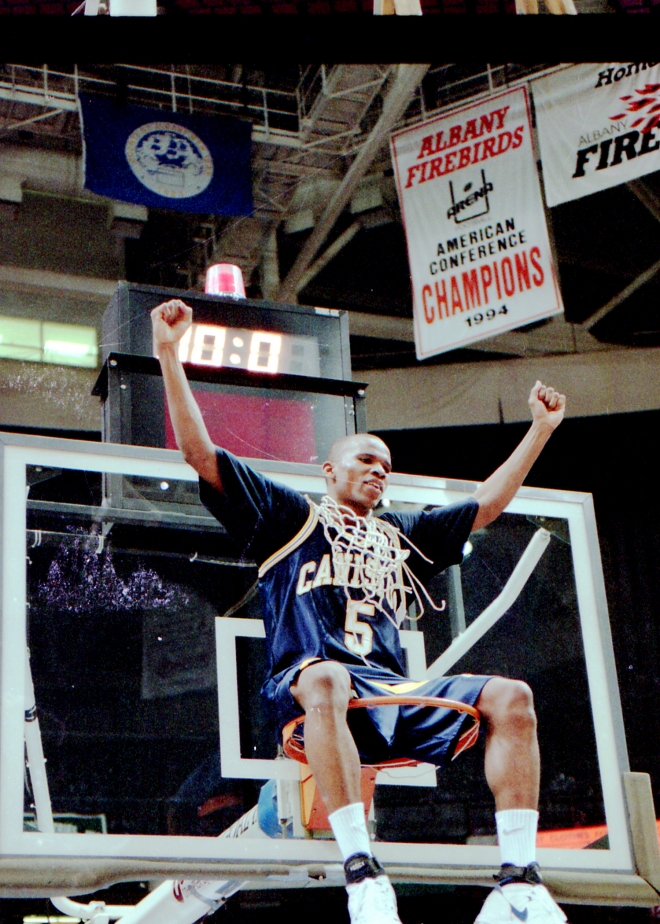 When Canisius earned an NCAA Tournament bid by winning the Metro Atlantic Athletic Conference tourney in 1996, Dave Schofield called the game on radio and then took a shot of Mickey Frazier sitting triumphantly on the rim. It remains a signature photo of the John Beilein era. (Photo courtesy of Dave Schofield)

On Saturday, Canisius honored Schofield and his brother, Jim, who lives in Syracuse and rarely misses Canisius men’s basketball games in Buffalo. The brothers were dual recipients of the Rev. Paul J. Dugan Award, which is given to individuals who aren’t eligible for the college’s Sports Hall of Fame, but whose efforts have significantly benefited Canisius athletics.

“Doesn’t qualify for the Sports Hall of Fame – that’s me in a nutshell,” Schofield says.

Ah, but he does qualify for the Irish American Baseball Hall of Fame, which is housed in Foley’s Pub in midtown Manhattan, across the street from the Empire State Building. He is that hall’s official photographer – and in 2014 was inducted as a member of the class that included David Cone, who once pitched a perfect game for the New York Yankees.

Dave Schofield once snapped a perfect photo. And chances are it will still be remembered 50 years from now, when the Sabres celebrate their centennial season.