Erie County residents taking a trip to Italy anytime soon can expect to be quarantined at home for 14 days upon their return – even those who feel fine.

The same goes for those returning from China, South Korea or Iran. The four countries have been tagged with Level 3 travel restrictions and advisories by the U.S. Centers for Disease Control and Prevention since the coronavirus outbreak began.

The travelers will be asked to agree to a voluntary 14-day quarantine. Those who refuse can be ordered to do so by Health Commissioner Dr. Gale Burstein, who said she has the authority to issue such a decree as the county's health commissioner. Her order would be delivered by a county health department official and a member of the Erie County Sheriff's Office.

"If someone does violate the commissioner’s orders, they are subject to prosecution," Burstein said.

"I hope we don’t get to a situation where we have to force a quarantine on anyone and station a guard outside their house," County Executive Mark Poloncarz said Wednesday. "But by God, we will."

At their news conference Wednesday, the two offered other observations and information: 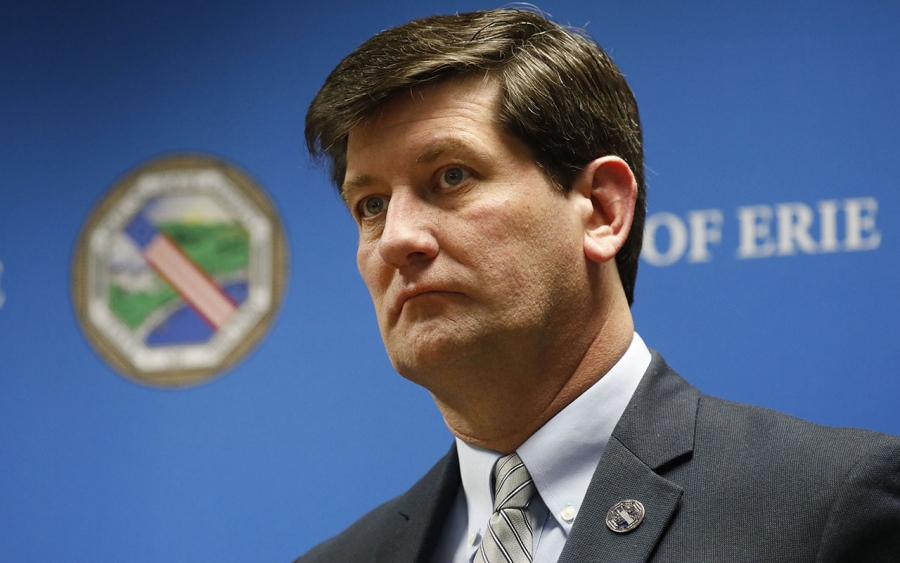 In all, 11 New Yorkers have been confirmed as having the COVID-19 virus in the past four days.

State Health Commissioner Dr. Howard Zucker said it is "highly likely" that the number of cases will expand exponentially in the future.

[Q&A: As fears hit Western New York, how worried should you be?]

Cuomo sought to put the coronavirus situation in some context. He noted there are 15,000 people in New York hospitals with the flu. As more people are tested, he said, more people will test positive.

Some Erie County residents, including students who have recently traveled to the four countries with Level 3 travel restrictions have already been quarantined by health officials. In addition, a few groups of people with signs of illness were tested for the virus within the past few months. All tested negative.

People who have traveled abroad but show no symptoms are not believed to be contagious or a risk to others, Burstein said. But if they have traveled to areas where there has been ongoing and widespread transmission of the illness, those individuals must be quarantined at home to ensure they are not incubating COVID-19 and eventually become contagious, she said. They are not tested for the virus unless they show symptoms.

Six people who had returned from Italy to the Buffalo area and shown some symptoms associated with the COVID-19 illness last week were tested at the state's Wadsworth lab in Albany. Their negative test results were released Wednesday morning.

Meanwhile, the Kenmore-Tonawanda school district said one of its students was asked to maintain a voluntary quarantine as a precautionary measure. The student had recently traveled to Italy before returning to school.

The county health department would work with those quarantined to ensure they continue to have access to food, clean clothing and medical treatment. They would also alert their schools or employers about the need for the individuals to stay home. Quarantined individuals would be asked to take their temperature twice a day, self-monitor for symptoms, and contact the county health department daily.

Anyone who shows symptoms associated with COVID-19 would be isolated and subject to similar rules. Depending on the severity of their illness, they may either be isolated at home or at a hospital.

The actions that would be taken in Erie County are similar to the actions already being taken in Westchester County, where about 1,000 people are currently being quarantined after a Westchester County man was confirmed to have contracted COVID-19 and has been hospitalized.

His wife, two children and a neighbor who drove the man to the hospital have also tested positive for the virus.

New York health officials remain concerned the case reflects a "community spread" of the virus because the man and his family had not traveled to any of the nations with outbreaks of the new coronavirus. The traveled regularly to work in midtown Manhattan.

Later Wednesday, state officials said another family in the same Westchester community, who are friends with the infected 50-year-old man and his family, were found to also be infected in a case of virus community spread.

The situation in Westchester has resulted in the closing of academic institutions attended by the man's children, and a synagogue he attended has stopped services. The 50-year-old man is hospitalized in critical condition. The others are in quarantine at home.

On Sunday, officials announced a Manhattan woman, a health care worker who had been in Iran, was diagnosed with the virus. She is quarantined at home.

Stay on top of the developments in Buffalo and Western New York as cases of the novel coronavirus spread throughout the United States.

You will now receive updates on coronavirus developments in Buffalo and WNY.