At first glance Almaza Grill, a purveyor of Lebanese cuisine and Peruvian-marinated rotisserie chicken, had all the ingredients of a night to forget.

It was Valentine’s Day, one of the most stressful services of the season, and the Transit Road dining room was packed. My walk-in party took the last seats, at a table blessed with a mesmerizing view: squadrons of chickens five astern spinning to golden glory in its flaming hearth.

A less salubrious sight, as I scanned the room, was the near-total absence of food in front of diners. That meant practically every plate ordered had yet to emerge from the kitchen door.

Seated by owner Moussa Khalil, we waited our turn for attention. It soon became clear that the woman behind the bar making a smoothie was also the only server. Flying solo. If this were a movie, screeching violins would swell up in the soundtrack. 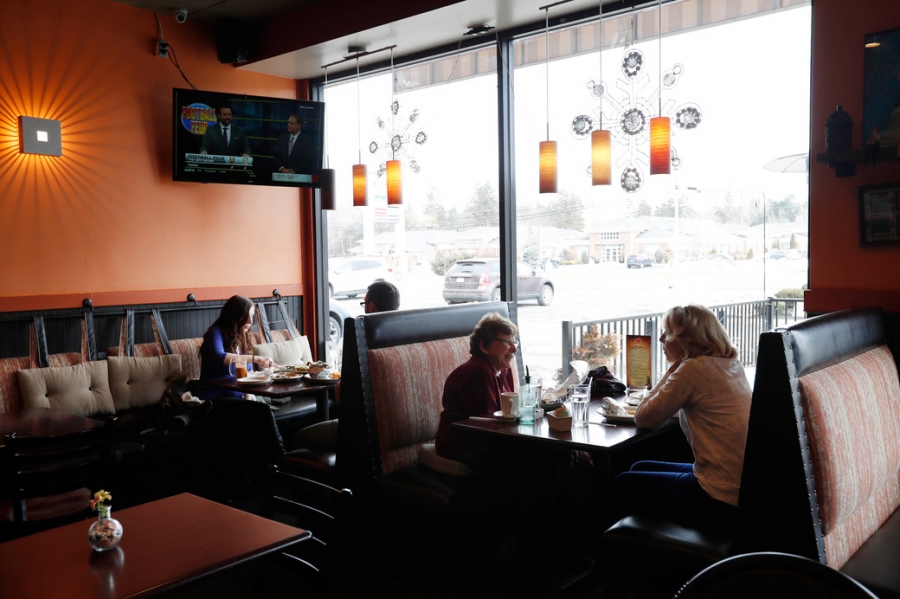 Looking around, though, there were no signs of anger or anxiety, only calm and chitchat. As it turned out, we would all be happily fed and done in under an hour.

A young boy at the next table roared at the prospect of getting his favorite chicken. I knew what he meant. There are thousands of eaters in the area who still idolize Swiss Chalet's rotisserie chicken. To whom I say: go to Almaza Grill and see if you can make a new friend, soaked in garlic, citrus and spices for a few days before its fiery transformation.

Twirled in the hearth, the skin is crisped into its own course. Underneath, meat slips off the bone easily, destined for the dynamic duo of dipping. The first bite of garlic sauce will prompt quick mental cataloging of who you plan to kiss in the next eight hours, before you inevitably go for a second nibble. Its green counterpart is racier, with green chile and herbs.

Your baba ganoush and hummus will arrive with a basket of warm, supple pita bread. Which meant a lot when the plates arrived within 10 minutes of sitting down. Another five minutes and we had a decent $28 bottle of merlot to go with it. 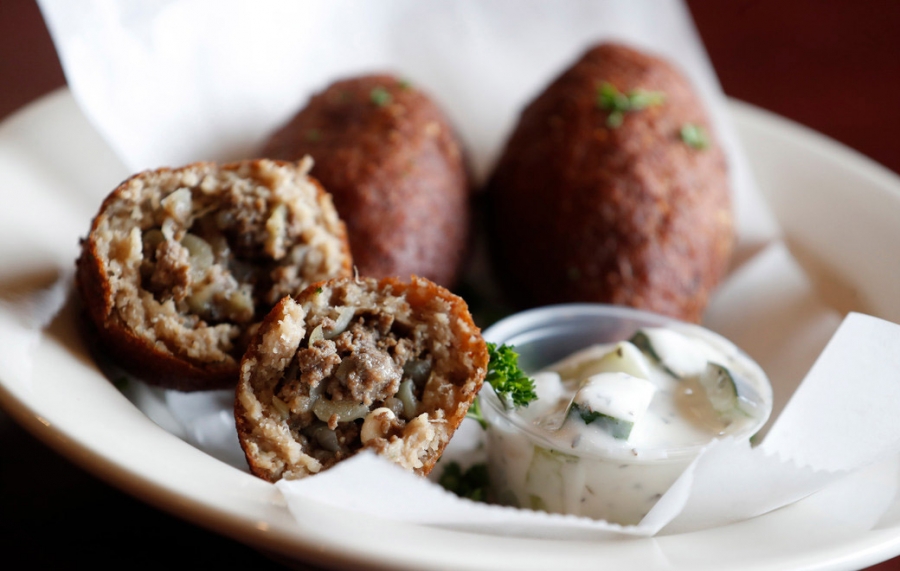 Loubie bzeit ($7) is one of the best vegetable dishes in town, and like so much Lebanese cooking, it’s vegan. Flat Italian green beans are cooked until falling-apart tender with tomatoes, lots of olive oil and whole cloves of garlic until the sweetness comes out. It’s also ladled onto cinnamon-scented basmati rice decked with fried almonds for an entrée ($14).

On the meat side, kibbe ($9) has been dialed in. These fried wheat and beef footballs are packing a payload of allspice-scented ground beef and pine nuts. Imagine if Chicken McNuggets were handmade, interesting and delicious.

Lamb roll ($11) is an excellent example of the form. Lamb kabob cooked to keep some of the pink amid fresh fixings and a dose of lemony tahini sauce that makes it a sandwich to be reckoned with. 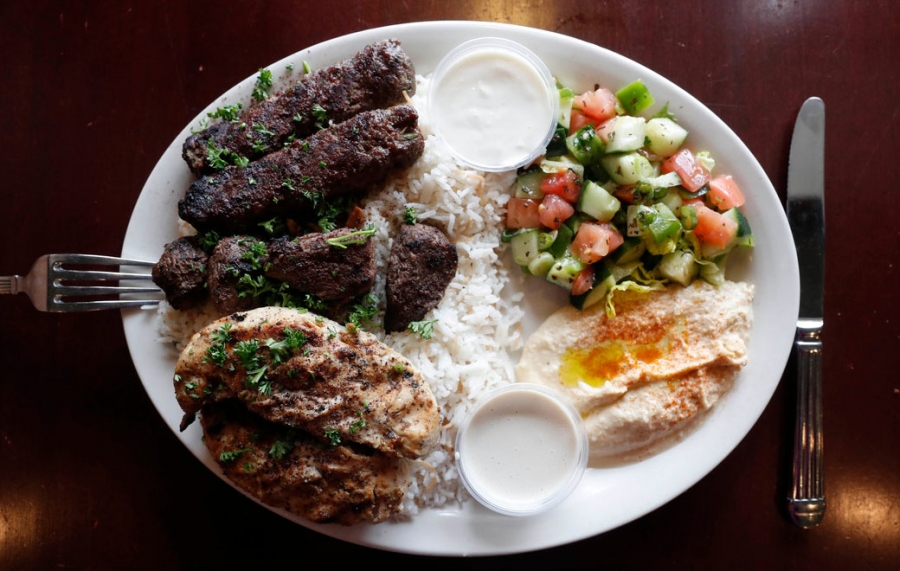 The Almaza mixed grill is made with grilled seasoned lamb, beef kafta and chicken tenders served with hummus, Lebanese salata, basmati rice with vermicelli and fried almonds and a touch of cinnamon with garlic sauce or tahini dressing. (Sharon Cantillon/Buffalo News)

Almaza mixed grill ($23) is a carnivorous feast for the ages. Lamb, beef and chicken get the Almaza treatment, but it’s not a meat cliché, thanks to a helping of Lebanese salata and hummus drizzled with more extra-virgin, so you can mix and match bites. It’s all on a cloud of fluffy, spice-scented rice. The french fries at Almaza are crispy and plentiful, but the rice is next level. (I’m not crazy about the hummus, preferring more lemon and garlic.)

Heat-eaters should know that Almaza has a housemade chile sauce that is the best 75-cent thrill ride I’ve has in ages. It’s not much hotter than Frank’s, but it runs laps around pedestrian factory hot sauce, brilliantly illuminating grilled meats and vegan green beans alike. Stir some into that pale hummus and watch it take off. 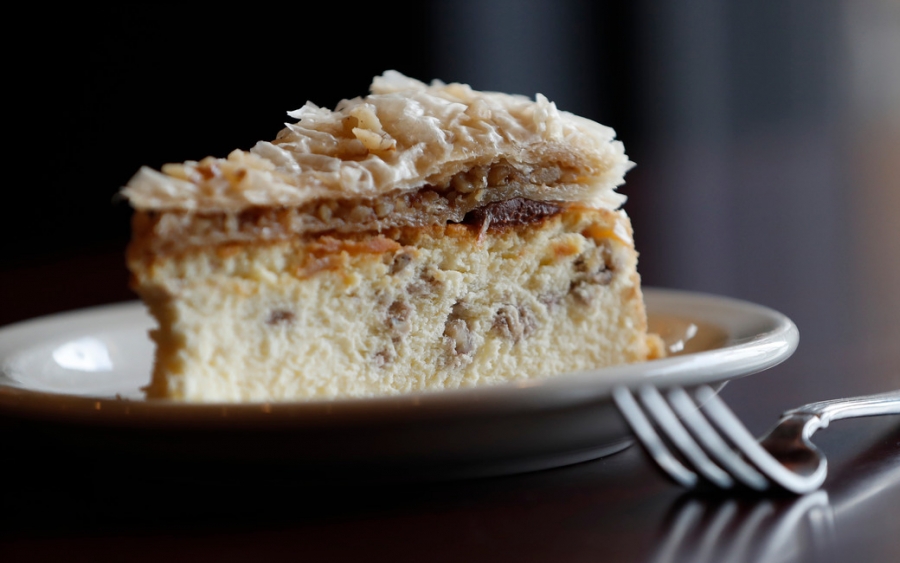 Maybe if you asked, they would warm it up for you. Almaza seems agreeable like that. Its staff’s watchful, solicitous personalities are a key ingredient. You have to appreciate a crew that gives you the impression they would rather throw themselves in front of a bus than let you leave unhappy.

Almaza Grill is the latest in a long line of family restaurants attracting a long line of customers by consistently offering delicious values in a hurry.

Lebanese and Peruvian, making sweet music together: just another singular, sensational pleasure Buffalonians get to take for granted. It’s a diamond in the Buff.