What it is about March that brings such a provocative round of shows in local theaters? Opening this week alone are shows starring Satan in the form of a puppet, forbidden love in a Jewish brothel, and betrayal, oppression, familial treachery and a classic tragedy of misplaced fatal jealousy.

First up is "Hand to God" at Road Less Traveled Productions, opening March 5. Although it features a teenager coping with loss, this is not a typical coming-of-age story. First off, one of the main characters is a hand puppet, and second, that puppet could be Satan. RLTP has so much faith in this show about the struggle between the spiritual and the parental advisory-level overtly profanes that it was originally scheduled to open its 2018-19 season; delays in the theater's move to 456 Main St. pushed the show to spring 2020.

The play, written by Robert Askins, was nominated for five Tony Awards and won several other theater prizes. This production stars Dan Urtz as young Jason, who finds his arm taken over by the puppet Tyrone — "lewd, profane, combative" — during a performance at his family's church. Tickets are $39, available at roadlesstraveledproductions.org or by calling 629-3069. Shows continues Thursdays through Sundays through March 29 in the Main Street theater.

A more familiar devil also comes to life on March 5 when "Othello" opens on the SUNY Buffalo State campus, presented by Casting Hall Productions and the Buffalo State Theater Department. Jennifer Toohey directs the student performers in this "retelling of the Shakespeare classic tragedy." No matter how it is retold, we can be certain that no good will come of the villainous Iago's vicious whisperings into the ear of the tragic hero Othello.

There is more intrigue beginning March 6 when New Phoenix Theatre presents Manuel Puig's intense prison drama “Kiss of the Spider Woman.” Victoria Perez directs Rolando Martin Gomez and Rick Lattimer as Molina, a transgender woman, and Arregui, a political revolutionary, who sharing an Argentine prison cell in 1975. Proximity leads the men to make unlikely connections despite their dissimilar backgrounds, finding temporary escape from their situation through Molina's memories from movies he loves. And then ...

See what else happens at 8 p.m. Thursdays through Saturdays, from March 6 to 28 in the cozy theater at 95 Johnson Park. Tickets are $30; $20 students and seniors; with Thursdays pay-what-you-can. Reserve them at newphoenixtheatre.org. 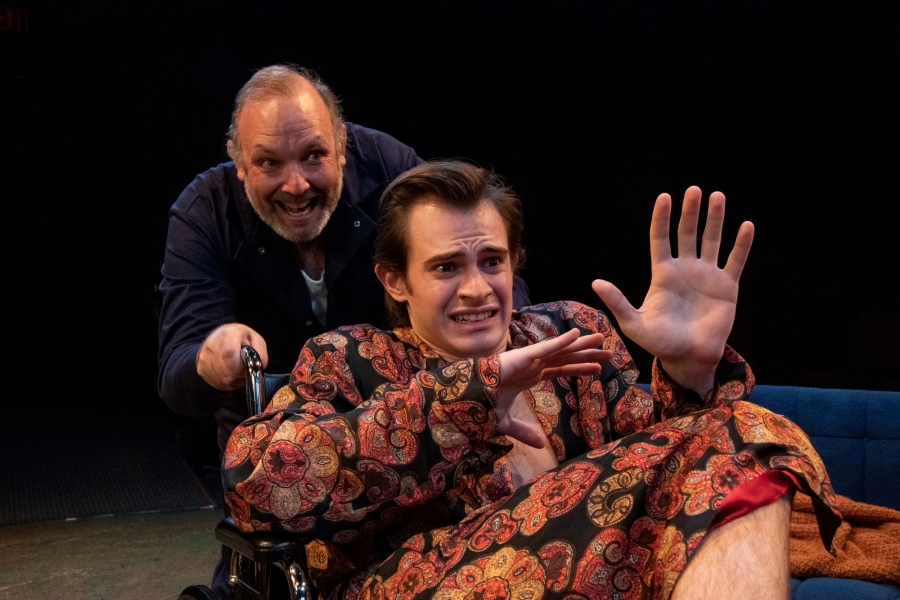 The theme remains dark — a dysfunctional family with everyone out to get one another — but the treatment is pure farce when Bryan Delaney's "The Onion Game," opens March 6 in the Irish Classical Theatre Company's Andrews Theatre (625 Main St.). According to the New Play Exchange, the script, chosen over more than 2,800 submissions to win the 2013 BBC Writersroom competition, is about "Onion and Pearl (who) are miserably married. As Onion writes the Great Irish Novel and Pearl covers the house in beads, they secretly plot each other's ruin. A grotesque black comedy of treachery, revenge, literature and onions." Greg Natale directs a cast headed by Stan Klimecko and Kelly Meg Brennan.

"The Onion Game" runs through March 29. Tickets are $49; $20 for students, available at irishclassicaltheatre.com, where you'll also find information about other discounts.

Two theater companies are collaborating to present "Indecent," opening March 6 at the Kavinoky Theatre on the D'Youville College campus (320 Porter Ave.). The Kavinoky partnered with Jewish Repertory Theatre of WNY to tell the story of Sholem Asch's 1907 play "God of Vengeance," about a Jewish brothel owner whose daughter falls in love with a prostitute who works for him, dashing his dreams of her marrying a rabbi's son. The play won a Tony Award for playwright Paula Vogel, who also has a Pulitzer Prize (among many others) in her pocket for "How I Learned to Drive." Kristen Tripp Kelley directs this production, which runs through March 29.

Tickets are $45, $40 for seniors and military; $10 students, at kavinokytheatre.com.

And there's even more

It takes a strong narrative for a play to eclipse the backstory of playwright Danai Gurira, and "Eclipsed" does just that. Presented by Subversive Theatre Collective as part of its "black power play series," the Tony-nominated "Eclipsed" also opens March 6, under the direction of Ebony Pace.

Janae Leonard and Shawnell Tillery lead the cast in the story about four women captives who are forced to be "wives" of a rebel commander during the Liberia civil war in 2003. Gurira, far better known as the machete-wielding star of television's "The Walking Dead" and for "The Black Panther," interviewed dozens of women who survived the war to create the play, seeing a strong message about humanity, cruelty and endurance. (As a side note, Gurira, who is from Zimbabwe, will be devoting her post-"The Walking Dead" time to producing an HBO miniseries adaptation of Chimamanda Ngozi Adichie's best selling novel "Americanah.")

"Eclipsed" runs through March 29 at the Manny Fried Playhouse (255 Great Arrow Ave., third floor). Performances are 7:30 p.m. Fridays and Saturdays and 3 p.m. Sundays. Tickets are $30; $25 for students and seniors, with Sunday shows pay-what-you-can. Reserve them at subversivetheatre.org or call 462-5549.

The coercion is less military for the  characters in William Inge's classic dramatic comedy, "Bus Stop," although it does involve a woman being take along on a bus ride she doesn't want. Things change when a winter storm has forces the Arizona-to-Montana bus to stop at a diner in Kansas, where the passengers and locals learn more about one another and their dreams of life and romance.

"Bus Stop" is the latest presentation by the Aurora Players, opens March 6, and continue through March 22 at the Roycroft Pavilion, South Grove Street at Prospect Avenue in East Aurora. Performances are 8 p.m. Friday and Saturday and 2:30 p.m. Sundays. Tickets are $15; $14 for seniors and students, online at auroraplayers.org or at the door.