Our latest Home of the Week post is quite different than the others we have published for the online feature we launched in fall 2017.

Charles H. Roberts III recently had the chance to visit an open house in Amherst and felt compelled to write about it.

The reason: It was the home he grew up in,  from age 4 to 19. The visit, he said, brought the closure he needed.

Here is his story:

My wife, daughter and I recently went to look at a beautifully remodeled home that’s for sale. Despite the house being located on a family-friendly street that backs up to a highly rated Williamsville elementary school, making an offer was hardly a motivating factor in the visit.

While countless others at the open house dreamed of the next chapter – I was there turning the page on a story in my life that ended abruptly about 20 years ago. They were saying hello, and I was saying goodbye.

This was my childhood home, where I return regularly in my dreams. In the subconscious, I’ve never lived anywhere else. My bedroom walls are still clad in Buffalo Bills posters. The old hardwood floor in the dining room squeaks with each step. And most of the interior door handles don’t quite latch.

The last time I consciously stepped foot on the property, I was a fresh-faced 19-year-old whose parents were going their separate ways. Now, I’m less than a month from my 39th birthday – with gray hairs penetrating my beard and a beautiful wife and 3-year-old daughter by my side (the former unrelated to the latter, of course).

When I walked in the front door last month, I was impressed with the new look. The previously tight floor plan felt spacious with the removal of several walls. The floors had all been replaced. The living room ceiling is now vaulted. The kitchen and bathrooms were updated. The built-in desk and shelves from my bedroom were gone.

This was decidedly a different place.

But the memories quickly began rushing back to me. I recalled countless hours of Nerf basketball in my 11-by-11-foot bedroom – which seemed at least three times the size back in the day. I glanced at what was my younger brother’s room and thought fondly about his self-imposed nickname, “Gumper.”

In the kitchen, I envisioned my mom preparing one of her delicious meals while keeping a watchful eye on the driveway, where I shot hoops year-round – rain, snow or shine. In the basement, I saw my dad and late uncle playing endless games of pool, with belly laughter and Tom Petty on vinyl filling the air.

I made my way to the garage by way of the tastefully renovated breezeway. The garage, however, somehow remained a relic of my youth – down to the old wooden garage door that opened to the backyard and a floor that was in desperate need of new concrete.

While in the garage, a man overheard me telling my wife stories from my youth. “Are your initials carved in this place somewhere?” he asked. I chuckled a bit and gave him a shoulder shrug.

About two minutes later, we found something that made the trip down memory lane worth its weight in gold: “CHARLIE/MATT 94” etched into a small patch of concrete outside the old wooden garage door.

Matt is my brother, and 94 was my first year as a teenager. It’s been 26 years since Gumper and I took a stick to the wet cement. Somehow, through 20 years of renovations since we moved out, our message has remained untouched.

I stood there amazed and began to realize how much I needed this moment – for closure on the past and appreciation for the present.

No sooner, I looked over at my daughter standing on another piece that’s held up over time: the deck my dad built about 35 years ago.

“Dad, come up here with me,” she said. She repeated herself, and I heard a much younger version of myself asking my dad the same question. I smiled and joined her on the deck, where we made a couple “paw prints” in the snow. 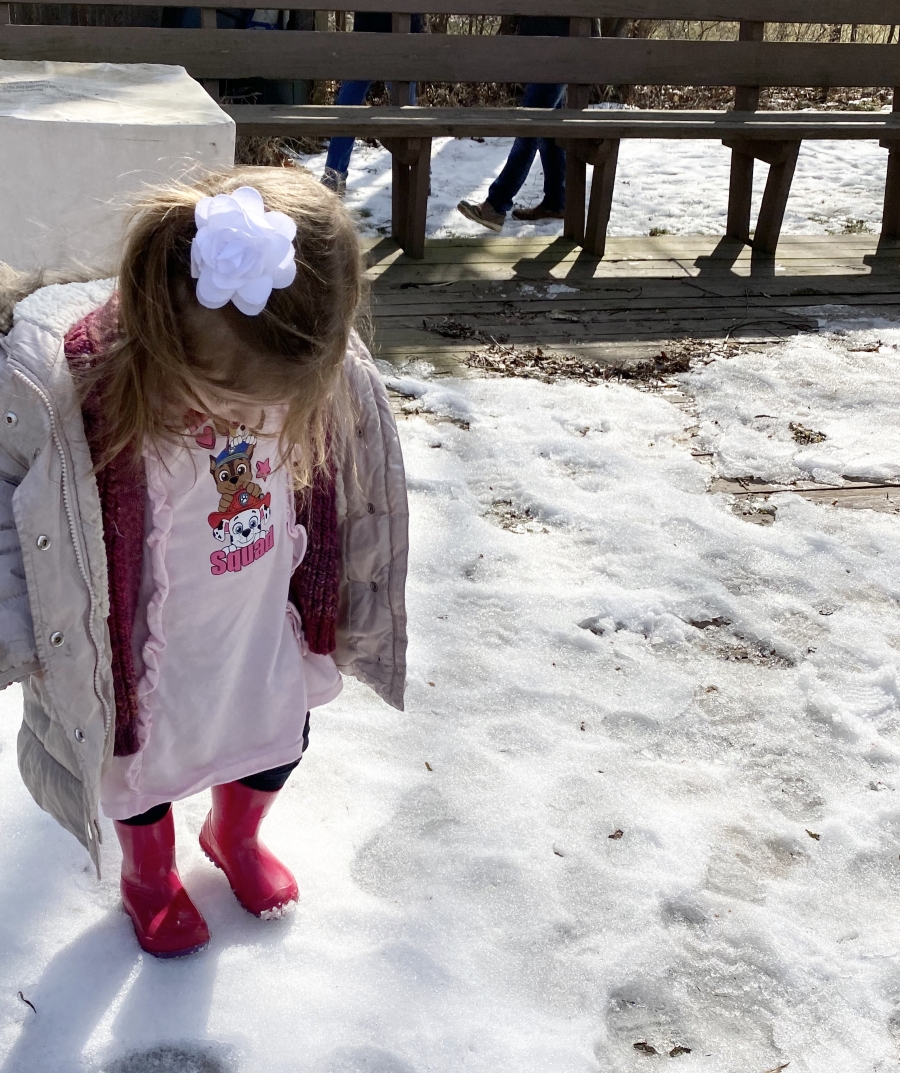 Zoey Roberts, 3, makes “paw prints” on a deck that was built by her grandfather, Charles Roberts Jr., more than three decades ago. (Photo courtesy Charles Roberts)

I stepped off the deck and took one last look at the backyard, which was a combination of melting snow and mud. But for a moment, it became the mid-1990s and my bare feet – likely coated in dirt – were atop the summer grass. I heard my mom’s voice calling from the back door, and I knew it was an appropriate time to head home – the home I share at present with my wife and daughter in North Buffalo, about 10 miles from where I stood.

As we were leaving, a young couple pondered the pros and cons of purchasing the home. They politely stopped me to ask a few questions. I answered to the best of my ability – fighting back the urge to cry – and offered one last thought: “I hope this becomes your home.”

My wife, daughter and I continued down the driveway toward my truck, which was parked on the street. I was, after all, a guest at someone else’s home. And for the first time in nearly two decades – that was all right.

Charles Roberts is a freelance writer who grew up in Amherst and is now happy to call North Buffalo home. His novella, “For the Love of Thomas Amore” (No Frills Buffalo) can be found on Amazon and in select Western New York bookstores. You can follow him on Twitter, @cHartleyRoberts

Story topics: home of the week