A summer day in North Buffalo became "the Wild West" after a minor traffic accident turned into a physical altercation with one driver brandishing his gun, prosecutors said Tuesday as the trial began of a Lockport man facing hate crime and other charges.

The victim, Jeanneie Muhammad, told jurors she thought she could get shot last July after the other driver grappled with her over her purse on the sidewalk on Colvin Avenue.

Once Jeffrey L. Calhoun was in the back of a Buffalo police car, he called her a racial slur, she testified.

Calhoun, who is white, was "dripping with anger" after Muhammad, who is black, struck the rear of his pickup with her car, prosecutors said. They said Calhoun ripped Muhammad's keys from the ignition and later pulled her to the ground. Calhoun held her at the scene by grasping her purse and at one point identified himself as a police officer, the victim and prosecutors said.

"The defendant took the law into his own hands," Assistant District Attorney Sean Bunny told jurors during the prosecution's opening statement.

Calhoun, 63, was arrested after the July 16, 2019, incident, some of which was captured on video by a bystander. He initially was charged with attempted robbery, but was later indicted on charges of first-degree unlawful imprisonment and second-degree menacing, both felony hate crimes, as well as a felony count of impersonating a police officer and misdemeanor assault.

Muhammad, 54, told jurors she was afraid for her life that day. She suffered head and knee injuries, was subsequently diagnosed with PTSD because of the incident and sought counseling, she testified.

"I felt like I'm in trouble," she said when asked how she felt when Calhoun took his 9 mm handgun out of its holster on the side of the road. 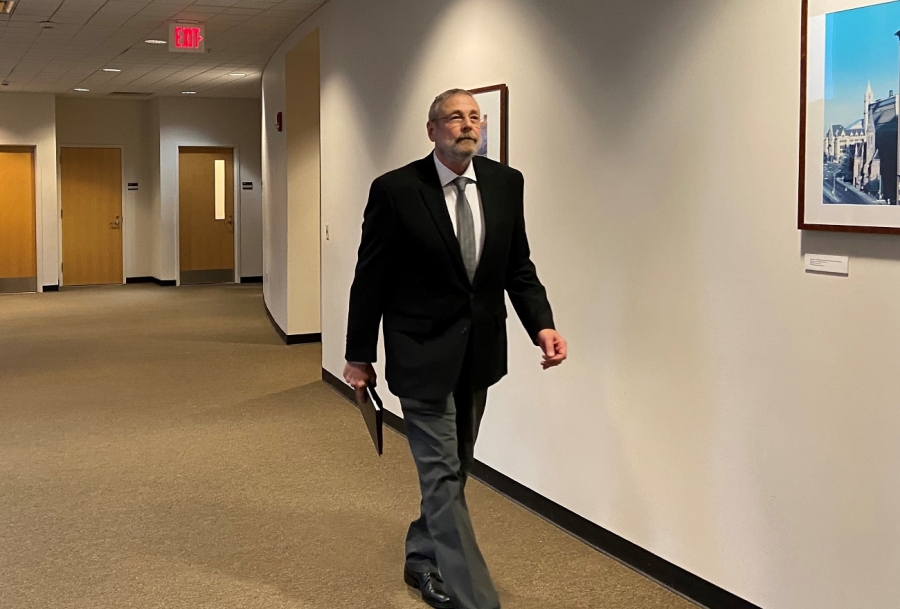 The incident happened shortly before 11:30 a.m. on Colvin near the intersection with Sanders Road. Calhoun was driving north and was stopped at a red light when Muhammad's sedan hit the back of his pickup. Muhammad's driver's license had been previously suspended for failing to pay traffic tickets.

She testified Calhoun told her he took her keys because he thought she was going to try to flee the scene.

Defense attorney Daniel J. Henry Jr. told jurors prosecutors were trying to "paint a bad picture" of Calhoun. His client did not commit any of the crimes he has been accused of and he didn't use a racial slur, either, Henry said.

"He's a good man who would never want to cause any pain or harm to anyone," he said.

Prosecutors rested their case Tuesday afternoon after calling six witnesses, including two police officers. Officer Paul Rudnicki, one of the first officers to arrive at the scene, testified he was within earshot of Calhoun the entire time he was at the scene and never heard him use a racial slur.

One thing that defense attorney Daniel Henry noted during cross examination of Muhammad was that her official written statement to police made no mention of the use of any racial slur by Calhoun.